A few Nintendo developers are worrying that you are not getting enough sunshine.

Splatoon co-director Tsubasa Sakaguchi and producer Hisashi Nogami are surprised at how fast some people reached the level cap of 20 in the colorful ink shooter. In an interview with Japanese magazine Nintendo Dream (via Nintendo Everything), the two game makers addressed the possibility that a future update could increase the Splatoon level cap.

“That is also under investigation currently,” said Sakaguchi. “We originally expected level 20 to require a nice amount of time to play.”

“[The leveling up has been] so fast that it makes me worry about players’ daily lives,” he said.

While that is a harsh (but fair) criticism of the way I choose to live, it doesn’t confirm whether we’ll get a higher level cap. But the developers do make it sound like it’s a possibility.

The level cap currently offers players a way to unlock new weapons and clothing options, but Nintendo has since unlocked several more weapons for free without requiring you to grind out more experience beyond the cap.

And that is working out well for Splatoon so far. By regularly adding new free content, like maps, Nintendo is able to keep players engaged and get lapsed gamers back into the action.

Nintendo may also hesitate to make any changes to the level cap in favor of focusing on its special events. The publisher held Splatfest on July 4 here in North America where players could choose either Team Cat or Team Dog and help each fight for supremacy.

Team Dog ended up winning the event despite Team Cat winning more of the matches. That’s because Team Dog was far more popular with 62 percent of players choosing to side with the canines. 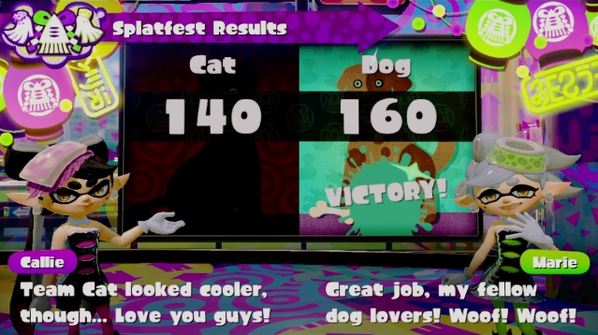 Above: I will see to it that Team Cat will have its revenge!