Facebook is experimenting with the design of some pages on its iOS app. We noticed some updates to user profiles and notifications, and after we published this story, Facebook confirmed the update.

These changes appear to be limited to a small subset of users and seem to go as far back as May, which indicates that this is yet another design test by the social networking company. These tweaks affect the way users view people’s profiles and also their notifications.

“What you’re seeing is a redesign of the mobile version of profile that we are testing to improve the profile layout and better present information about a person,” said a Facebook spokesperson in an email to VentureBeat.

Here’s what you’ll see if you’re fortunate enough to be included in this sample group when looking at user profiles: 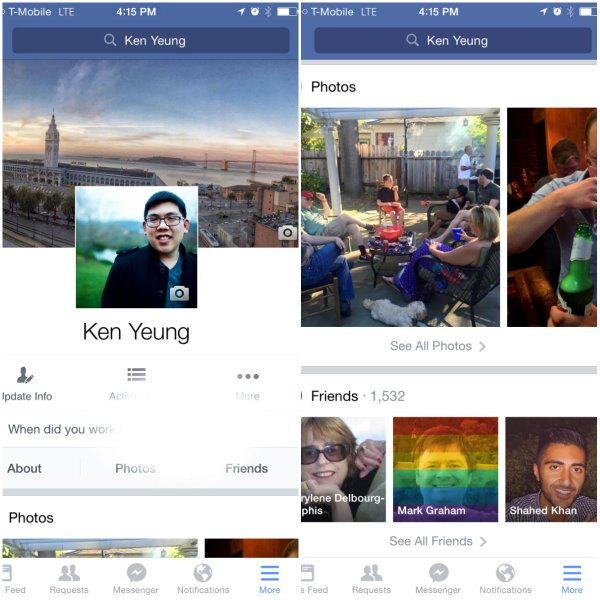 As you can see, there is a more prominent focus on the visual elements, specifically a user’s cover photo, avatar, and other photos. No longer are your photos and friends limited to a small box hardly viewable on your iOS device. Instead, there’s a carousel-like motion where you can scroll through all your photos by swiping your finger.

What’s more, if you visit any user’s profile and swipe on their cover photo, the app will let you cycle through all the different photos they’ve used before.

One could theorize that Facebook wants to make it easier for users to click on the user profile or photo that they want without going through too many steps.

The notifications screen has also received a small touch-up. It looks much cleaner, with a blue dot next to items you have not read yet.

It’s important to note that while some may be seeing these changes on their iOS device, we’re not seeing them on Android or on the Web. Also, company pages remain the same.

Should this roll out to the masses, this update would be the latest in a series of design changes Facebook has made over the past few weeks, such as the rollout of an updated logo, a revised News Feed with more emphasis on videos, and a new iOS photo uploader.