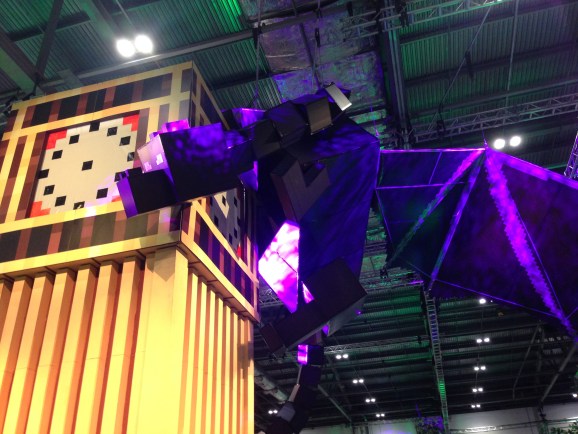 An Ender Dragon wrapped around Big Ben in the Minecon 2015 exhibit hall.

LONDON — It’s not like Minecraft needs to prove that it’s moved beyond being just a video game into a full-blown global cultural phenomenon. But it got more evidence of this, anyway, at the start of Minecon 2015, its first player-conference since 2013.

Having sold 10,000 tickets in the blink of an eye, Minecon 2015 was certified as the largest conference devoted to a single video game by the Guinness Book of World Records.

But forget the shiny plaque. All you had to do was look out into the packed ExCel Center to see the thousands of Minecraft players, primarily kids and teenagers with their families, waving their plastic diamond swords to know that things seem to be going just fine in Minecraft land.

I was in the crowd with my two kids, ages 12 and 10 and both also devoted Minecraft fans. We were fulfilling a bit of a dream, having missed the first official Minecon in Las Vegas back in 2011, back when it had just launched version 1.0.

Of course, the big question lurking in many people’s minds (though probably not those of the youngest fans) is how life under a corporate umbrella with change Minecraft?

The most immediate change was the absence of Minecraft’s creator, Marcus “Notch” Persson at Minecon 2015. In deciding to sell, Persson said he planned to walk away from Minecraft, having become overwhelmed by its success.

And by all appearances, he kept to his word. Whether it was his request or a company decision, I can’t recall hearing a single mention of Notch at any of the opening or closing ceremonies or any other panels I attended. Everyone seemed to be all about celebrating today and looking forward, and that may be just fine with Persson.

Because this was my first Minecon, I can’t compare it to past events. But the next most noticeable thing about this event was Microsoft’s giant booth at the heart of the exhibit space. 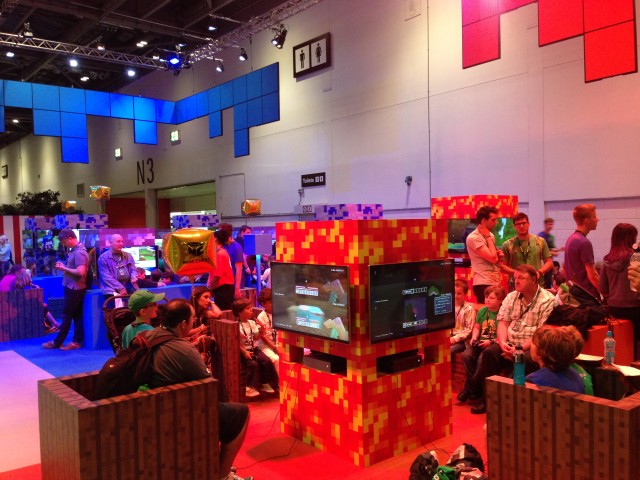 Above: The Microsoft booth at Minecon 2015. 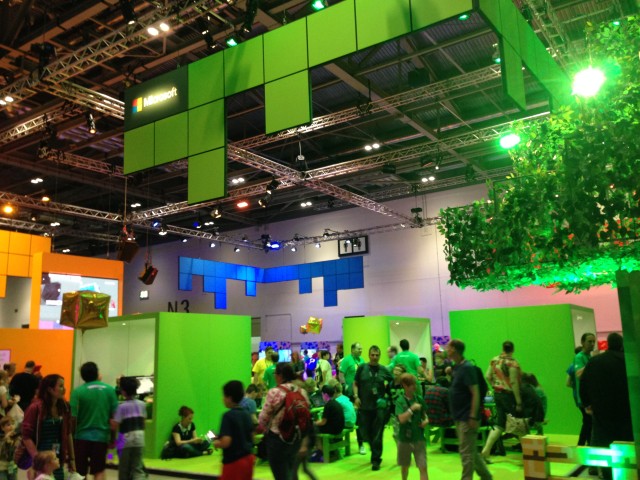 Above: The Microsoft booth at Minecon 2015.

The booth had dozens of Xbox stations, tablets, and desktops set up for people to play Minecraft. It didn’t seem to be pushing any particular message, beyond “Minecraft is awesome.” And it certainly didn’t seem like people were avoiding it or giving it the suspicious side-eye.

Of course, it’s way too early to render and kind of judgment about Microsoft’s stewardship of Minecraft. But I’d argue that a few of the initial signs are in fact hopeful. If nothing else, the development of Minecraft for the HoloLens, Microsoft’s new holographic-augmented reality headset, seems flat-out awesome based on the demo it recently gave at the gaming industry’s big trade show, the Electronic Entertainment Expo.

I was bummed they didn’t do a similar demo live at Minecon. And while some limited demos occurred in a deep, dark room at Minecon, I wasn’t able to snag one of the coveted slots.

But I will say based on what I’ve seen, Minecraft on HoloLens seems incredible. It’s easy to imagine Minecraft is the killer app for this thing, and if so, Microsoft’s acquisition will look like pure genius.

More importantly, HoloLens has the potential for some revolutionary game play. Patrick Moorhead, the principal analyst at Moor Insights & Strategy and a longtime Microsoft watcher, was at Minecon this weekend with his son.

Beyond that, Microsoft is starting to bring more development resources to Minecraft.

For all of its impact, Mojang has 30 people in Sweden. Some aspects of Minecraft, such as the Pocket Edition, have lagged significantly in features not for technical reasons but simply because only a couple of folks were working on them.

Now another 30 people working on Minecraft in Redmond. Microsoft wants to create a unified Minecraft for all platforms (even for its console rival, Sony’s PlayStation), and so it announced this week that on July 29 the Windows 10 beta of Minecraft will become available. It’s based more on Pocket Edition, the stripped-down version aimed at mobile platforms. The Windows 10 version will have support for game controllers, more integration for Xbox Live, and more consistency.

Initially, it will also have fewer features. But for players, if they can have a single experience, that seems like a win. Eventually. And it was going to take Mojang a long time to accomplish such a thing, if it ever did. Microsoft still has a long road ahead to make this happen, but it also has more resources and incentive.

Still, during the two-day event, Mojang people on stage kept referring carefully to their new “partnership” with Microsoft. It seems like an unnecessary bit of corporate soft-pedaling of the fact that ultimately, some else is signing the checks now. Yet it’s a nod to the fact that they are trying to move carefully so as not to squander their well-deserved indie cred.

Right next to Microsoft in the exhibit hall, however, was the large Mattel booth. 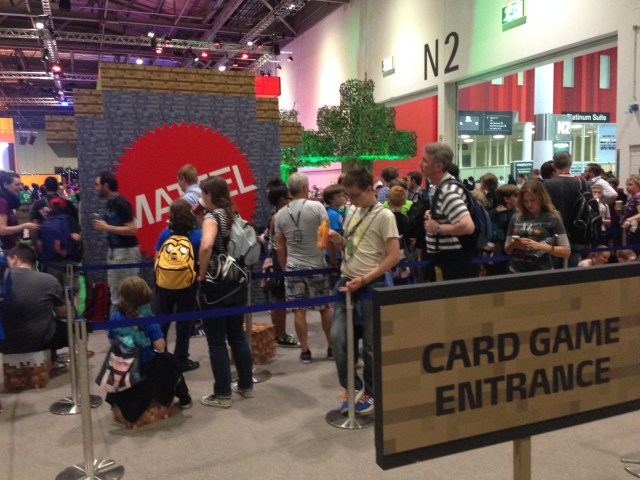 While I have nothing personal against Mattel, I have to admit that the dozens of new plastic-y Minecraft-related toys it had on display for release later this year gave me some pause. This business partnership predates the Microsoft sale. But it’s also clear that they’re really ramping this up in the coming year. 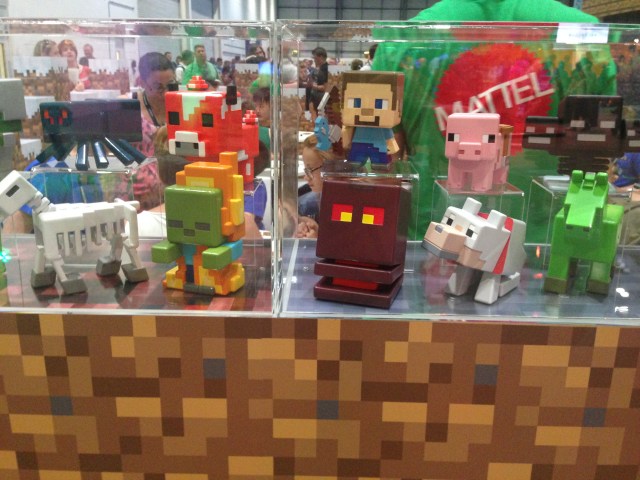 Certainly, this is the way of the world. Mojang could probably have done a bazillion things to maximize revenue and exploit the Minecraft brand besides this. Still, most of this stuff is just, well, stuff. It doesn’t really factor into the game itself. It just seems to mark the loss of just a bit more innocence as Mojang grows beyond its indie roots.

But this is probably just stuff that adults like me worry about it. At the end of the day, the Mattel station for trying its new plastic-y Minecraft bow-and-arrow on a shooting range was crowded throughout the weekend.

And on that note, the overall tone of the weekend was one of celebration, joy, and community. It would probably be hard to find any of the younger kids there who didn’t feel like it wasn’t the greatest weekend of their lives, something you could hear being uttered over and over. Certainly, my kids’ were close to that sentiment. 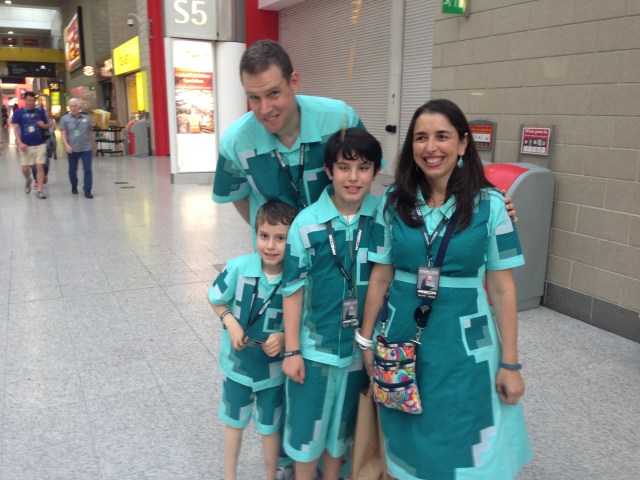 And around the hall, and on panels, we saw great displays of the kind of creativity that lies at the heart of the Minecraft phenomenon. Booths were dedicated to Minecraft in schools, panels on how the U.N. is using Minecraft to help with urban planning in developing nations, and how kids can use Minecraft to learn to code.

Naturally, the parade of YouTube stars were on hand to wave the flag. And the rapturous reception that greeted people like IHasCupQuake and The Diamond Minecart when they appeared on stage certified Minecraft’s hypnotic hold on a younger generation.

I sat through The Diamond Minecart’s liveshow Sunday afternoon, and the thousands of kids in the audience, including mine, were transfixed. And during the Q&A after, kids under 10 wielding plastic diamond swords were practically trampling each other for the chance to ask TDM what his favorite mod is. 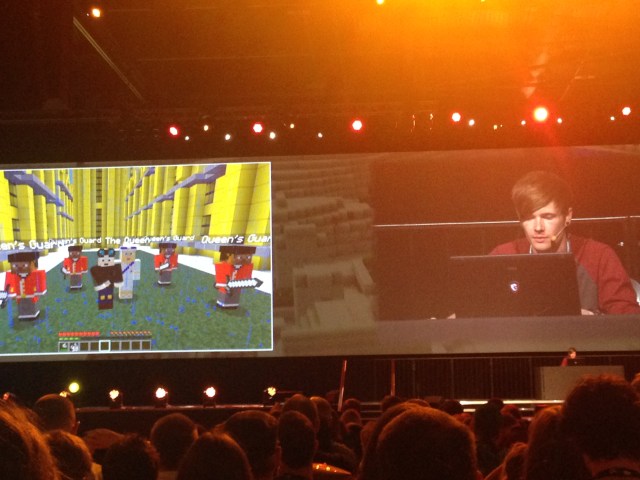 Above: The Diamond Minecart’s liveshow at Minecon 2015.

So the joy that people derive from Minecraft, and that sensation of sharing and discovering it together with close friends and far-flung strangers across the Internet seems to be perfectly intact. It’s quite possible that Minecraft is so distributed, so community-driven, that no corporate master could screw it up at this point.

As I walk through #minecon2015, thinking if Microsoft can keep it fresh and non corporate, they got a $2.5B deal. pic.twitter.com/ug6KxVlRPY

For players, an owner that can keep Minecraft awesome would be priceless. 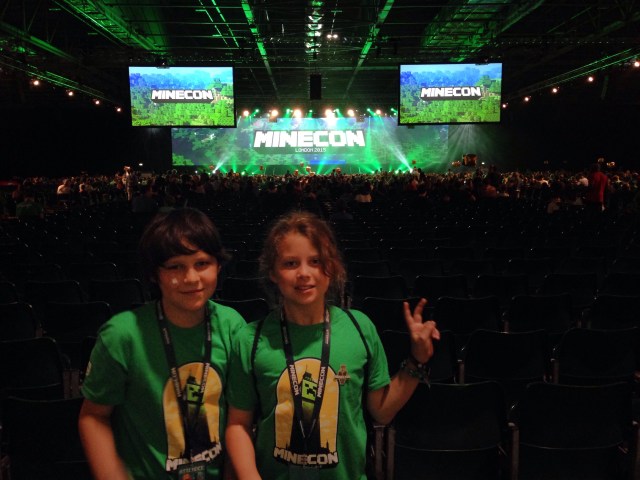 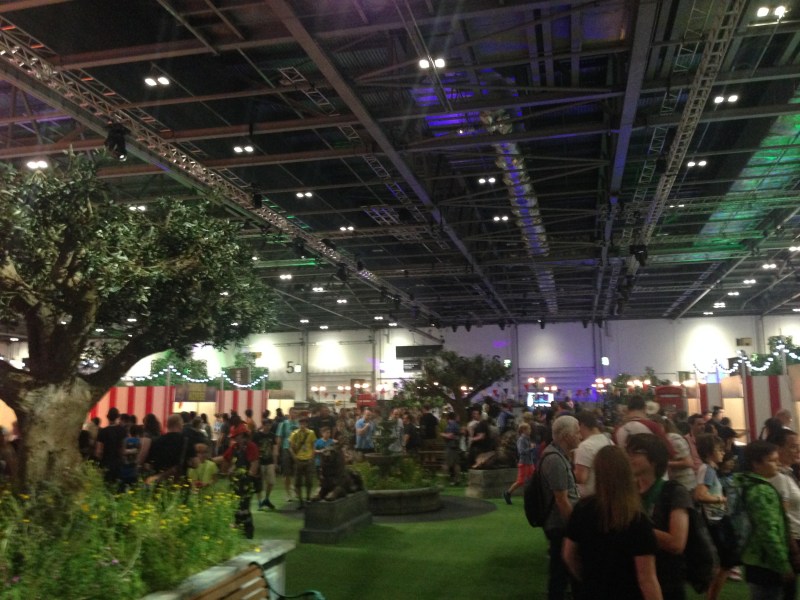 Above: The exhibit hall for Minecon 2015 was decorated like the set of a Minecraft game.