Microsoft is continuing its recent trend of ignoring its own Windows Phone mobile operating system with the launch of a new mobile app designed to help you create impromptu polls around events. 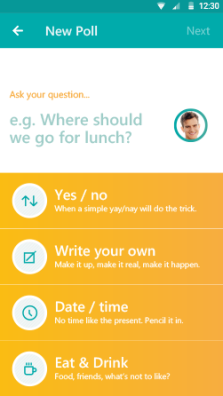 Available for Android and iOS in the U.S. and Canada only, Tossup lets you ask quick questions such as where to have lunch, for example, or where to meet. It can be used to garner opinions on just about anything. And Tossup is the latest in a long line of apps to emerge from the vaults of Microsoft Garage, the computing giant’s lab for experimental tinkering.

Launched in August of last year, Snipp3t is an iOS-only app that gathers celebrity news from across the Web in a single place. Then there’s the Next Lock Screen app for Android which gives you access to key information directly from your lock screen. Picturesque is another lock screen app designed with Microsoft’s Bing search engine in mind. Journeys & Notes is a social travel app that seeks to connect a community of users who have traveled on similar routes.

Though Microsoft has been making bigger moves in the hardware realm of late, particularly with the recent acquisition of Nokia’s devices and services division, it’s trying to remain true to its software roots by building products for competing operating systems — and in the case of mobile, often at the expense of Windows Phone.

Tossup may never end up being a fully fledged product but as with the other Garage apps that have come before, this is Microsoft’s way of testing the market, seeing what works and what just might gain traction.

Tossup was developed by a small group from within the Outlook team and was tested out among employees in-house, as well as at the University of Washington in Seattle and California’s Santa Clara University.

“Everyone has been through the tedious experience of planning a get-together which results in long email threads or text messages that go on and on without any resolution,” explains Ashok Kuppusamy, one of the key people behind the app. “We’ve built an app that helps people in these everyday scenarios.”

Meanwhile, you can watch the official promo video below.