U.S. consumers are warming up to smartwatches, but version one of the leading smartwatch isn’t doing too well in the marketplace right now.

Those are the main points of two new pieces of research on smartwatches out today.

New numbers from Slice Intelligence published on Marketwatch today say that sales of the Apple Watch took a dive in June after holding steady in April and May.

Slice gathers data from emailed sales receipts to monitor how well devices are selling in the U.S. 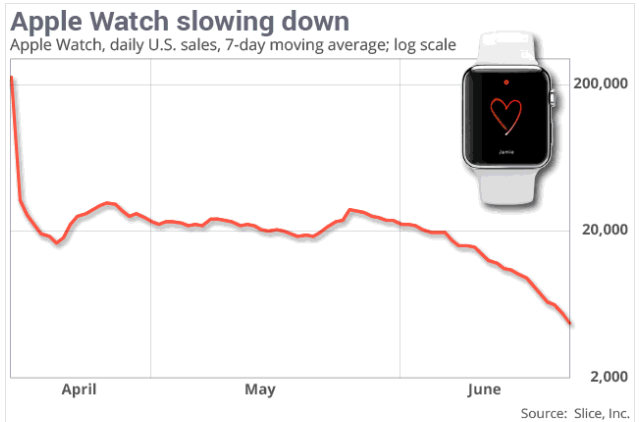 This is the second bit of bad news for the Watch in roughly a week. Slice reported at the end of June that the Fitbit was outselling the Watch after trailing behind since the Apple device became available for preorder April 10.

Meanwhile, Parks Associates released new research today saying that 9 percent of U.S. broadband households plan to buy a smartwatch in 2015. At this time last year the smartwatch was considered little more than a tech novelty by most people outside tech corridors.

Parks adds that 40 percent of smartwatch shoppers plan to spend $100-$250 on a device, with over 60 percent of these consumers planning to use this wearable for fitness applications.

Six percent of smartwatch shoppers plan to spend $350 or more on a device. Interestingly, nearly three-quarters of those planning to spend more than $500 told Parks they would only buy a smartwatch if it worked without a smartphone.