Heroes of the Storm is gaining a following as the multiplayer online battle arena (MOBA) anyone can play. And with the new Eternal Conflict event, which began last week, Blizzard makes a great case for why it’s one of the best companies at keeping their games alive long past launch.

Eternal Conflict saw a massive balance overhaul for the MOBA, along with a new character, map, and minor visual and interface tweaks. It’s an ongoing event, with more characters, skins, and maps coming in a few weeks. But the initial batch of content alone is enough to get me back into the game. The new Battlefield of Eternity map and The Butcher character are among its best, and these should satisfy veterans and newbies alike.

Battlefield of Eternity should have been one of the first maps Blizzard introduced to Heroes of the Storm. This isn’t because it launched with too few maps — it’s now the game’s simplest and most fun map to play.

Every map has an objective beyond destroying the enemy team’s core, and Battlefield of Eternity’s objective couldn’t be simpler. Fitting with Eternal Conflict’s Diablo 3 theme, the map is bisected into heaven and hell halves. Instead of a middle lane, the map’s center hosts a large arena.

Every few minutes, two immortals (Iliarian the angel and the demon lord Beleth) spawn in the arena. As they fight, both teams need to rush over and help kill the other team’s immortal. This creates several protracted fights, since the immortals take quite a while to kill.Whichever immortal wins the fight will then move to one of the two lanes, providing their team with a powerful ally to assault forts, similar to the neutral boss enemies players can recruit on every other map in the game.

Because the immortals stand far apart as they lob shots at one another then switch sides halfway through, teams need to decide whether to defend their own immortal, attack the enemy’s, or hunt down the enemy team. Some teams may even choose to have one or more of their players ignore the fight altogether, pushing one of the two lanes in peace.

It’s a wonderful, chaotic mess of a map, made all the better by the intense fight animations of the two immortals. More than most other maps, Battlefield of Eternity makes you feel as though you’re part of a larger conflict and not just playing some sort of strange future sport. It’s also the first map themed around one of the actual games in the crossover, and it’s cool to see Blizzard start to tie in its universes into Heroes of the Storm more directly.

And because players only need to focus on that single fight throughout most of the match, newer players won’t get lost or confused by some of the more complicated objectives found in other levels.

Battlefield of Eternity is the best map in Heroes of the Storm, both for veterans looking to show their team-fighting prowess and newbies trying to understand how the game works. Maybe my interest will wane as I play more games and poke holes in its design, but as of now, I’m actually a little disappointed whenever I play on any other map. 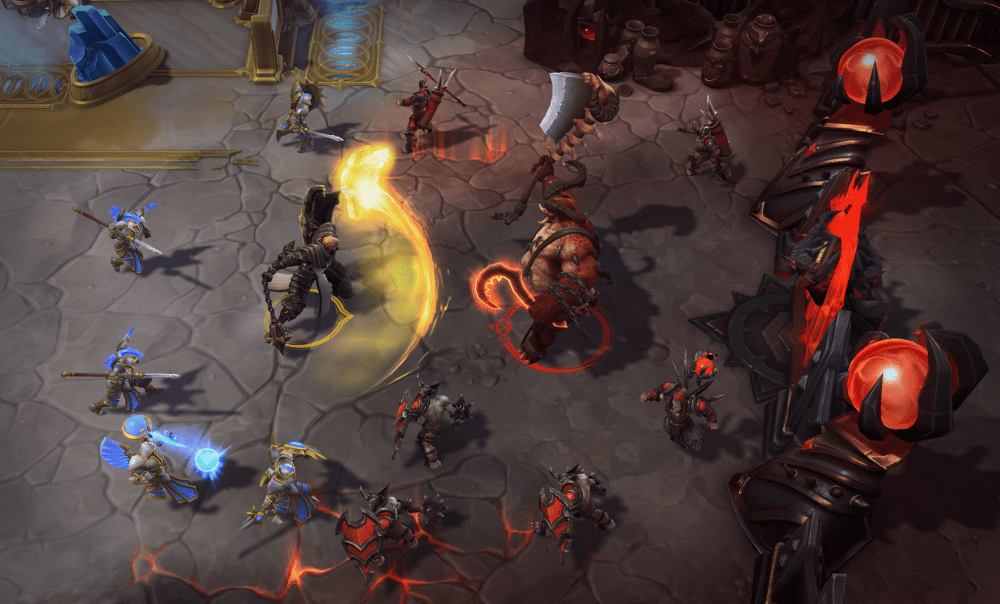 Above: The Butcher’s Brand ability allows him to go up against just about anyone in single combat.

I wasn’t too excited when Blizzard announced that The Butcher would join Heroes of the Storm’s roster. He wasn’t a particularly fun boss fight Diablo 3, or at least not a memorable one. I planned to save my money for the Monk, who should follow in the coming weeks. However, after playing several matches as The Butcher, I’m glad he’s made it in.

The Butcher is an Assassin (a hero who deals massive damage in a short period of time), though he has a few traits of a Tank (a hero better suited for taking damage). His four abilities revolve around starting a fight on your terms and making sure the enemy sticks around long enough for you to do tons of damage. He can slow enemies down and charge and siphon health from them. The charge is his most enjoyable skill; you can start in on one enemy, get them to retreat, kill another who may be around, and then charge at your initial target from a ridiculous range, pushing everyone out of the way as you run toward someone who thought they were safe.

Charging into a crowd of enemies can get you killed, but it’s a great way to set up both of his Heroic abilities. Furnace Blast deals enormous damage in an area after a small delay, and you can begin priming it as you’re charging an enemy. But I prefer his Lamb to the Slaughter ability, which deals far less damage but hitches the nearest enemy to a post, preventing them from walking away from four seconds — eons on Heroes of the Storm time. Upgraded at level 20, it hitches all nearby enemies, making it one of the best ways to stop enemies from escaping after your initial burst of damage.

Along with his four regular abilities, he has the innate ability to collect fresh meat from enemy creeps and heroes. Every drop of blood increases his attack power, and depending on which traits you invest in as you level up, fresh meat can heal him or increase his attack speed. This allows you to cater him more toward his preferred roles as an Assassin, or have him become more of a Tank, depending what your team needs. You lose all your fresh meat if you die, however, so he’s definitely a character built for capitalizing on momentum.

He may be a little strong right now (the range on his charge and the cooldown on his slowing ability feel like they might get tweaked), but he’s a ton of fun. He may not be as novice-friendly as some other heroes, but he’s definitely an option people playing some of the easier Heroes like Raynor could graduate to as they look for more complex characters to play.

As Blizzard shows it’s serious about Heroes of the Storm as a real player in the MOBA market, prolonged events like Eternal Conflict are just the right way to keep players coming back and awaiting new content. The Monk and King Leoric are still a few weeks away, but for now, I’m having a blast charging enemies as The Butcher on the Battlefield of Eternity.