Fingerprint Digital has come a long way since its inception on CEO Nancy MacIntyre’s kitchen table.

Founded in 2010, the San Francisco-based company wanted to make it easier for parents to find the best educational apps for kids on iOS and Android devices. It created Fingerprint Play, a “kids edutainment” platform that’s like Netflix for child-friendly apps and games. The network acts as a hub for other Fingerprint content: When you download one of the free apps, you’ll see a list of other games that your child might like. MacIntyre and her team travel around the world to bring more apps and developers to its platform.

At the end of Fingerprint’s first year, it had eight apps and three developers. Now, it has more than 1,000 games, books, and videos in its library and works with 200 partners. More than 3 million families play with Fingerprint apps, with kids spending a total of 40 million minutes on the service.

MacIntyre is an industry veteran who formed Fingerprint after working on major video game brands like Star Wars and Civilization. In a wide-ranging chat with GamesBeat, she talked about some of the things she learned about the kids-app business and how Fingerprint is not only trying to help parents discover new apps but also help indie developers monetize their games. Below, you’ll find five of the most interesting points from our interview. 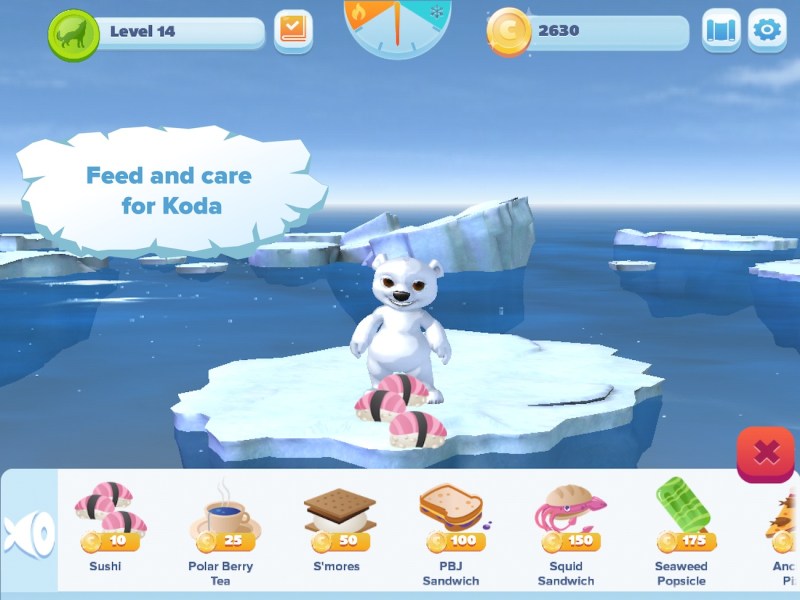 Above: Koda Quest teaches the importance of recycling and water conservation.

Mobile games vs. TV vs. toys

Whenever I visit my nieces in San Francisco, I always see them glued to either an iPhone or iPad. They play a few games here and there, but they mostly use their tablets for watching YouTube videos or cartoons on Netflix. So I asked MacIntyre if educational apps still have to compete with traditional timesinks like TV and toys. She said that in the U.S., most parents allow their children to spend 1.5 hours on mobile devices every day, adding up to 10 hours a week. The average TV watching time is higher than that at more than four hours per day.

“But we don’t really think about it from the perspective of ‘we’re competing with toys’ or ‘we’re competing with TV.’ We see it as educational games, [entertainment-focused] games, and video as the three most used activities on screen by kids under 12,” said MacIntyre. “Once [they] get much older than that, social media and texting becomes the center of their universe. But for younger kids, it’s definitely games and videos that are the drivers of [tablet and phone] usage.”

Fingerprint believes that as more content becomes available for phones and tablets, the more time kids will spend with them and play educational games.

“When you look at the growth in tablets and also the hand-me-down value in tablets — parents buy a new one and [hand] the [older version] to [their children]. Just like you see in the gaming space, all indications are that tablets are here to stay and growing in terms of the importance in the family,” she said.

It’s important to broaden your scope

Despite the growth in smartphone and tablet ownership, not every family can afford those devices. That’s why Fingerprint partnered with technology company Findaway World to sell 10,000 tablets to public libraries across the U.S. These durable devices, known as Playaway Launchpads, are just rolling out now and come with apps from Fingerprint’s huge catalog. The selection covers a diverse range of topics like math, geology, and learning new languages.

“It’s interesting. … There’s a certain segment of the population that tends to be under-served in terms of Wi-Fi, Internet access, and access to mobile devices and tablets,” said MacIntyre. “That segment of the population tends to use the library for access to computers and the Internet. And now, this is the first program that will actually bring tablets and educational content to that audience. We are really psyched about it. The product has come together incredibly well.” 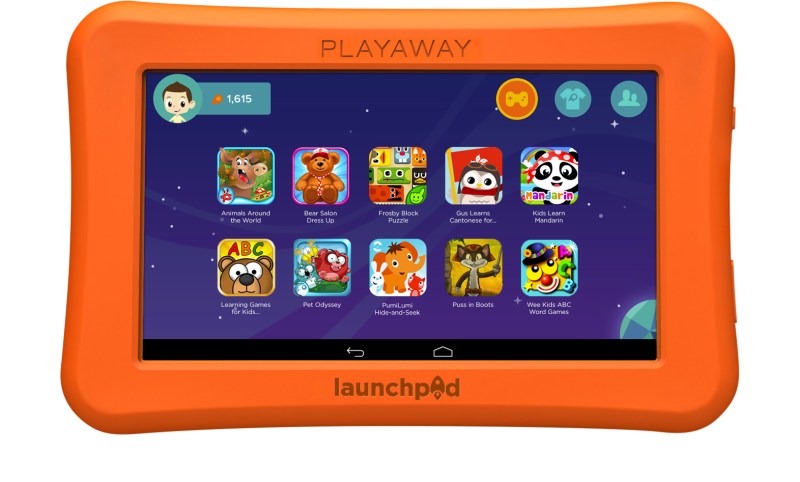 Above: Families can check out the Launchpad from participating libraries.

One of the biggest challenges facing kids-app creators is monetization. They can’t use the same strategies as others do in games aimed at adults.

“Many of the tactics that you might use in the adult market — you can’t and wouldn’t want to do in the kids space. You also don’t want to do advertising like you would in the adult space. So, when you think about where the monetization has to come from, you’re really in a position where you’re limited by business models to premium games or subscription games, or coming up with some other business model that is acceptable to the consumer.”

More and more companies are using subscriptions, which MacIntyre said is beginning to look like a business model that “really works” for this audience. Some of the top-grossing kids apps use subscriptions. But as long as the different app stores have, according to MacIntyre, “almost an unlimited amount of free content,” monetization will continue to be a challenge. Most of the games in Fingerprint’s library are free-to-play and have microtransactions that are more like expansions rather than one-time use items.

“I think there’s probably, out of our 1,000-odd apps, less than 10 that use consumables [temporary items],” said MacIntyre. “We find that the best methods for parents, particularly around edutainment content, is giving them the option to buy content packs. They’re really comfortable with that because they know exactly what they’re buying.” 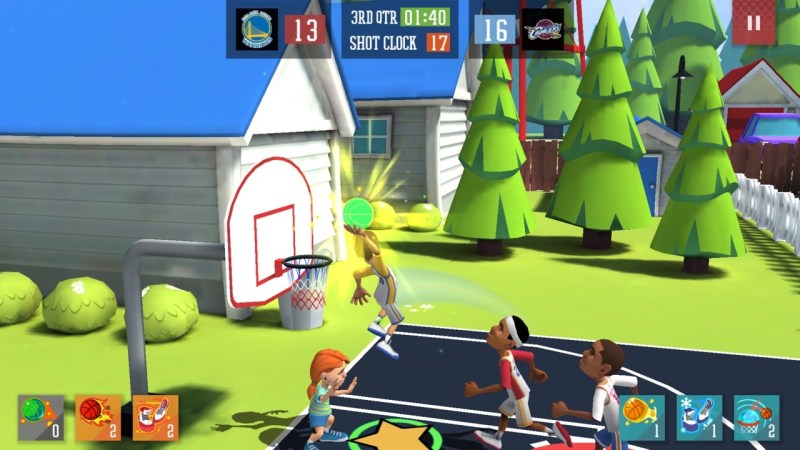 Above: Fingerprint also built a platform for a new series of Backyard Sports mobile games.

When it comes to in-app purchases, Fingerprint found that the simpler the message, the better. For most parents, it’s not a question of which add-ons they should buy. It’s either they choose to pay or they don’t. When they do want to buy something, most end up buying all of the content because they like the convenience of just making one transaction. MacIntyre used Fingerprint’s Kids Learn Mandarin app as an example. Parents can buy five new Mandarin lessons for $5 or all 12 lessons for $13.

“In the same way that we might look at the one-day retention on an app or a one-week retention on an app, parents intuitively do the same thing,” she said. “If they download a free app for a child and they see them play it once, great. If they see them want to play it a second or third time, they say, ‘OK, my child really likes this app, and so, I’m gonna buy the paid version of it, so they can have access to all the content.’ That’s sort of the mental exercise that parents go through.”

Helping the little guy pays off

Though Fingerprint works with big companies like Samsung, DreamWorks, and the Sylvan Learning Center, they also partner with a bunch of independent creators. 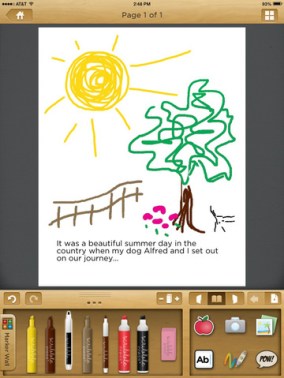 Above: Kids can make their own books in the Scribble Press app for iPad.

“But the bulk [of our partnerships] are just these little — I call them ‘two men and a baby shop’ or ‘two ladies and a baby shop’ — that are developing a couple of great apps a year, and they’re making great content,” said MacIntyre. “But they really [need] a publishing and distribution partner that can help them find an audience.”

One developer grew so big that Fingerprint decided to buy it. When Fingerprint first met with Scribble Press, the company only had three people: the CEO and two developers. The company created a platform where kids could make their own ebook stories using stickers, templates, and writing tools. Fingerprint helped them create a version suitable for younger children (Scribble My Story) and tweaked the original Scribble Press app so that it could be used in schools. Scribble Press has since been downloaded 1 million times and is currently in use at more than 35,000 classrooms in the U.S.

“It made way more sense to bring that company into the Fingerprint fold and actually acquire them, so we could invest and help them build a much bigger business,” said MacIntyre.