Quip is announcing today the availability of a new Windows and Mac desktop version of its collaboration-friendly word processing, spreadsheet, and messaging application. Until now the app has only been available through Quip’s website and on iOS and Android.

“By far the biggest request from our customers is to do a desktop app,” Quip cofounder and chief executive Bret Taylor told VentureBeat in an interview.

Besides that, desktop use of the app has been steadily increasing, unlike that of many other web applications these days. When Quip launched in January, 2014, 20 percent of usage happened in Quip’s desktop web app, and the remaining 80 percent happened on mobile. This month, it’s about 50-50, Taylor said.

Quip on desktop feels springy, reliable, and almost local — but in fact, it’s backing up your work on Quip’s servers. You can use the app without an Internet connection, and it will synchronize once you back online. On Mac, files show up in Spotlight search results.

The arrival of Quip on desktop, particularly on Windows, makes it a more formidable contender to Microsoft’s Word and Excel — but Taylor sees Google Docs as a more direct competitor, because it’s perceived as being free. 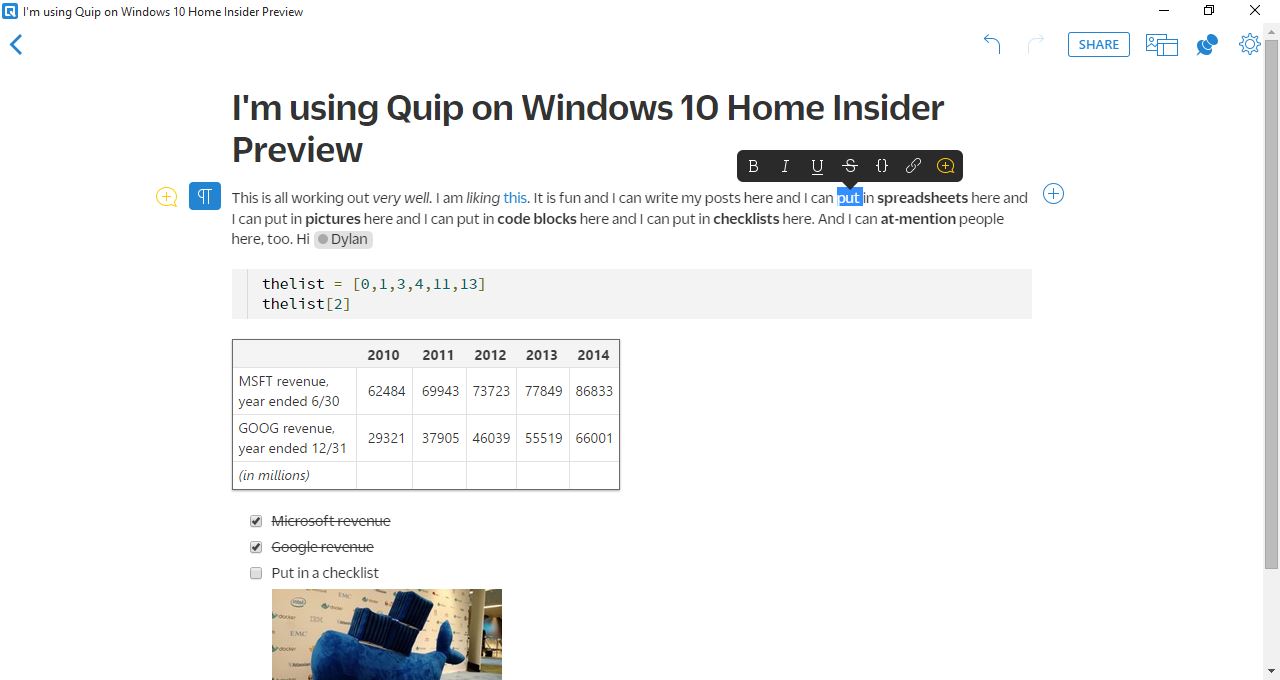 Above: Quip on desktop on Windows 10.

Perhaps the most interesting part of the app is that spreadsheets and text documents can handle edits by multiple users, even when they’re offline.

“In a Quip spreadsheet,” Taylor explained, “every cell is a completely independent atomic unit. … If you go into Quip and you make a spreadsheet cell bold while you’re offline, and another person adds four rows above that cell, it still works, because you didn’t change that cell within the context of the shape of the spreadsheet, or even within a file. You actually made a change to this thing with this unique ID.

“This has really cool side effects. You could make a change to one cell, and someone else moves it four columns over, and it still works. You weren’t addressing it as row 4, column 5. You were actually addressing this thing with this value.”

And if two people edit the same thing — like a bullet item in a list — Quip goes with one of them and shows users both changes. From there, colleagues can revert. “We don’t make you resolve it unless you choose to,” Taylor said.

It might sound like Quip has forced users to deal with what could be a formidable technical challenge, but users don’t seem to mind. “We’ve never once had someone report a synchronization problem within Quip in two years,” he said.

More than 30,000 companies, including Facebook and Stripe, use Quip. The San Francisco startup boasts that its app has millions of users.