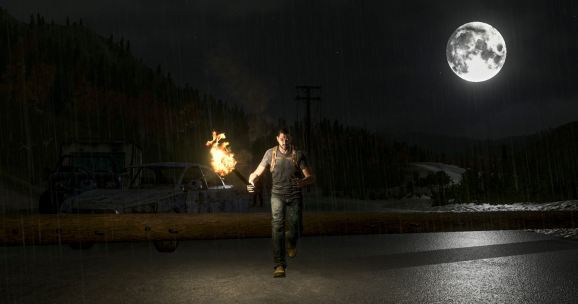 Like this person carrying a torch at night, Daybreak has made itself a target.

Yesterday, the chief executive officer of publisher Daybreak Games made headlines for threatening a group of cyberattackers. Today, the company’s website and games are experiencing outages.

At 2:13 p.m. Pacific time today, a Twitter account claiming to represent the Lizard Squad cyberattackers began targeting the Daybreak zombie massively mutliplayer online game H1Z1. Moments later, people began having connectivity problems not just with that game but also with several other Daybreak releases and its website. Even the Daybreak Games server-status page is struggling to load. Lizard Squad is the same group that took responsibility for the PlayStation 4 and Xbox One holiday assault that knocked those services offline around the time of Christmas.

Daybreak CEO John Smedley has taken to Twitter to confirm that the company’s network is under a distributed denial-of-service attack.

Getting a minor DDOS. We're working on it. should be back up soon. #annoying

This attack comes just two days after Finland convicted Julius Kivimaki, one of the kids who outed himself as a Lizard Squad member, for 50,000 counts of computer crimes. Despite those convictions, the 17-year-old Kivimaki was only given a commuted two-year-sentence, which meant no jail time. The cyberattacker will only have to serve those two years if he commits further crimes.

Smedley took to Twitter yesterday to express his position that this was too light of a sentence. As part of the 50,000 criminal counts, Kivimaki was found guilty of harassing people that include Smedley by sending SWAT teams to his home and threatening to blow up a flight he was on leading to it getting grounded.

@Haze2K1 I'm 46. I've had my identity stolen, tax returns filed, I've been swatted and many other things. So yeah, I'm pissed.

Now, seemingly due to these comments, Smedley is once again having to fend off a group of criminal computer vandals. But while Smedley deals with the fallout of his comments, fans are pretty grumpy that they cannot get online to play.