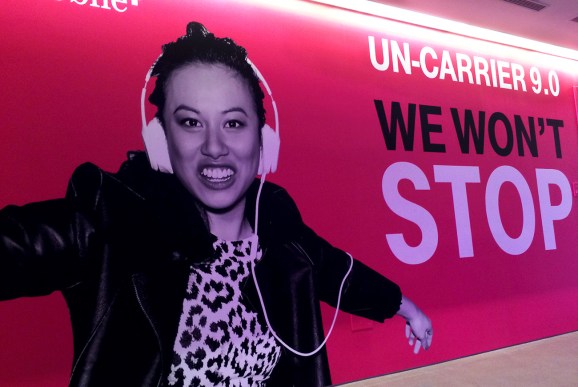 That means U.S. smartphone users won’t have to pay roaming fees when traveling to those territories — that applies to data and calls. They can also now make calls from the U.S. to Mexico and Canada for free. The announcement was made during a conference call with journalists Thursday morning.

“We’ve tried as hard as we can to get from old school to new school,” says John Legere, CEO of T-Mobile during a media call. He’s been working hard to attract new customers to T-Mobile’s network with cut-rate deals. It may be working. Legere said in the last quarter T-Mobile brought on an additional 2.1 million customers, bringing it’s total customer base to 58.9 million — larger than Sprint’s.

This marks the second in a string of new “Uncarrier” programs and pricing options T-Mobile is announcing in succession this summer. In late June the carrier announced the rollout of a new leasing program called Jump On-Demand, which lets subscribers upgrade their smartphone as often as three times a year. It also announced a limited-time offer in which customers can buy an iPhone 6 for $15 a month, when they trade in their current smartphone.

Last December, T-Mobile launched its Data Stash program, which allows subscribers to roll over and save their unused data. Before that, the carrier announced that soon all its phones will be able to seamlessly hand off calls from its LTE network to available Wi-Fi networks. Apple announced that its two new phones, the iPhone 6 and the iPhone 6 Plus, will support that hand-off.

The carrier’s Music Freedom program, announced in June 2014, allows T-Mobile subscribers to listen to their favorite music service (be it Spotify or Pandora or a number of others) without having it count against their monthly data cap. The program was initially rolled out last June, along with a new Rhapsody-powered T-Mobile music service.