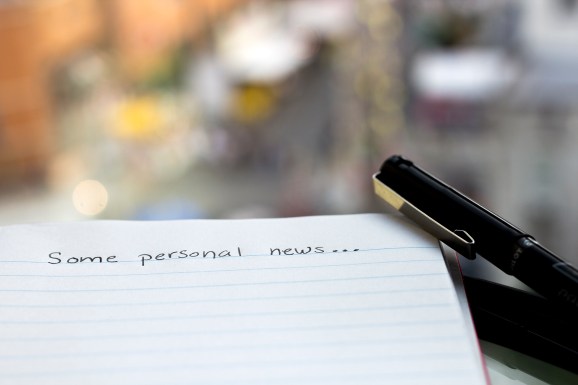 You are no doubt familiar with (and perhaps tired of) the farewell post, the one announcing some “personal news” on a choice social media platform.

It is the thing that anyone who’s anyone, or who thinks they are someone, writes when they leave the thing they are known for doing to go do something else. Even if you haven’t seen the announcements themselves, you’ve likely come across the parodies.

Some personal news. I've decided to get rid of this ridiculous beard. This weekend. It's gone.

some personal news: I just hiked by Connie Britton and we made eye contact

The desire to post major life milestones in public forums is no doubt inspired by the growing number of technological platforms that allow us to communicate our every thought, lunch decision, and haircut faux pas. And while there exist questions about a national rise in narcissism thanks to these digital soapboxes, the farewell post seems to be more a matter of necessity — and the trend is only likely to grow.

Today, we, with our cadre of social followers, are the keepers of our own brand identity. In an age when everyone and anyone can be a celebrity, we are now obliged to relay the news of our departure and subsequent embarkment onto greener pastures with the world. We are our own public relations team tasked with dispelling myths and clarifying intentions.

For evidence, take tech columnist Farhad Manjoo, who last year publicly announced his decision to leave the Wall Street Journal after just a few months on staff for a job at the New York Times.

“The fact that I spent like four seconds at the WSJ before departing to a rival raises all kinds of assumptions—mainly about my own character, granted, but also regarding the WSJ. And I want to nip those in the bud” — Farhad Manjoo, columnist for the New York Times.

Or more recently, TechCrunch co-editor Alexia Tsotsis, who decided to give up journalism (for the time being) to pursue an MBA:

“Okay, I am stepping down as co-editor of TechCrunch, but not due to the allure of Hollywood or whatever is going on with Verizon. Instead, I will be fulfilling my completely rational, lifelong dream of going to business school” — Alexia Tsotsis, former Editor in Chief of TechCrunch.

Announcing a change of direction isn’t a new phenomenon. Before the social platform boom, a person would perhaps send an internal email to their colleagues or tell a handful of individuals about their move or change in profession. In the case of a person of note, a career change might require a press release; in other cases an editorial column might be in order. Popularity was measured in awards and book deals, not likes and follows.

Hey guys, I have some personal news: I'm joining Fusion later this month to oversee its money/finance vertical! (This tweet is not a joke.)

Now we have followers who want to know what we’re up to next, making us obliged to craft an announcement every time we make a move. The farewell post also has the added bonus of perceived transparency. Straight from the horse’s mouth, as they say.

And transparency is important to fans. Yes, fans. Acolytes that religiously follow the social feeds of reporters, executives, thought leaders, and the generally talented. Clans of followers are important to anyone building a brand around who they are and what they do (read: a lot of people).

The tallying of followers on digital platforms and ranking by sites like Klout and SocialRank has given people a sense of celebrity that’s no longer a 15-minute flash in the pan. Now we can measure our success by the number of people who subscribe to a feed of our quips, works, and musings.

This isn’t just about fame or notoriety. Having a mass following is a professional currency all its own in certain industries. For instance, when reporters with a big social media following switch jobs they can theoretically bring their audience with them. For publications that can mean more ad dollars.

Writers aren’t the only ones. Maintaining a following is important to anyone looking for a new gig or trying to amass and keep a clientele. Take for instance, Max Zachariades, who wrote about his departure from Microsoft in a tell-all blog post on TechCrunch that was essentially a take-down of his former workplace. Or About.me’s cofounder Ryan Freitas, who took to Medium to talk about why he was leaving the company he helped found. Even a makeup artist I know posted a long letter to her followers on Instagram explaining that she wouldn’t be taking appointments because of a recent injury.

“I’m moving and I’ve been struggling with whether to do one of these or not,” says Jeff Hancock, professor of communications at Stanford University. He says “struggling” because there’s a negative connotation that hovers around the farewell post.

Hancock, who studies the relationship between mental health and social media, says that although these public letters are somewhat self-promotional, they’re really about sharing who you are.

“We’re very narrative, especially in our current culture, so by saying I’m moving to a new job, it’s an opportunity to get your story out there,”  Hancock says.

Today’s admissions of departure are increasingly morphing into more than just a quick announcement. They’re becoming an opportunity to tell your life story and encourage your following to stay with you on your next journey. Take for evidence Evelyn Rusli, who unveiled her decision to leave the Wall Street Journal in a Medium post titled My Byline is a Lie. In a long narrative she describes a childhood wherein she tried to “blot out” her racial identity in favor of a more beige existence — until one day, when a disclosure about her family name led her to become obsessed with sussing out her heritage. To delve deeper into her search she ultimately boarded a plane bound for Jakarta, thus beginning her decade-long career as a journalist. Rusli closes the post by saying that she is dropping out of journalism and starting a company.

“I am leaving to start a company (I know, I’m a San Francisco cliché). I’m not ready to disclose plans yet, so I’ll just say, in editor parlance, “more TK” — Evelyn Rusli, former reporter for the Wall Street Journal.

It’s a fairly simple message — one that could be conveyed in a tweet, or for the ambitious, a tweet storm. But instead, Rusli opted to tell us her life story and how all the things that have come before have been building to this moment, a momentous one for her. She’s not saying farewell, a mere see you later. She’s got plans, and if you’re interested in knowing more, stay tuned. Whether intentionally or not, Rusli has created a cliffhanger for her fans — one that begs them to stay tuned.

Gone, but not forgotten

Of course, as much as the farewell post is a necessity, it’s also a plea to be remembered — especially in circumstances where a person is dipping out of the public eye.

That doesn’t mean we’re all narcissists, it just means that communication has evolved and we have larger networks than we’ve ever had before.