We’re nearly midway through summer vacation, but still far from the start of the school year. Can’t send your children off to camp, but still need to keep them entertained? Google wants to help you out. The technology company today kicked off its inaugural free summer program, aptly called Camp Google, that runs from July 13 through Aug. 7 and is open to children of all ages (although primarily geared toward kids aged 7 to 10).

No stranger to summer programs, Google has frequently organized these types of events in order to inspire participants to never stop asking questions. Camp Google is not like the traditional programs where you send your kids away. Rather, it’s primarily virtual, allowing “campers” to participate right from their own computers.

Emily Stiebel, product marketing manager for Camp Google, told VentureBeat in an email interview that Google always aimed to create a free summer camp that gets kids learning through fun, interactive science activities and adventures. “The activities have been designed to encourage kids to ask questions, setting them on what we hope will be a lifelong journey of exploration and discovery. We also took families’ busy schedules into consideration by making sure they can access Camp Google activities when and where they want to,” she said.

To achieve its mission, Google has teamed with educational nonprofit Khan Academy, the National Park Service, National Geographic Kids, and NASA to put together sessions and activities for the campers. Each week, the camp has a different theme: The first week will focus on the Ocean, then Space, Nature, and finally, Music. Campers can watch videos from experts in their field and participate in do-it-yourself activities (Camp Google provides a supplies list). 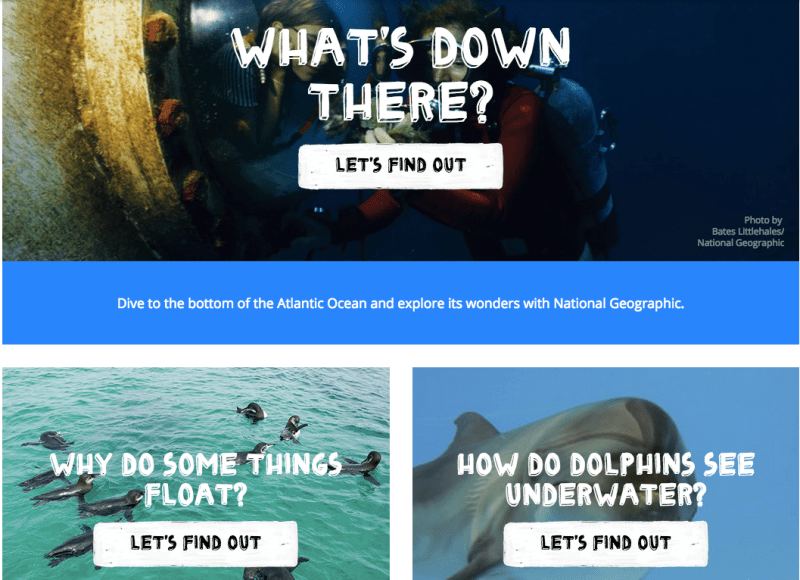 Just who will be teaching these sessions? While there will be a slew of professionals available to provide education for your children, Google has arranged for some notable instructors to participate — Sylvia Earle, one of the co-hosts for Ocean week, was named National Geographic’s Explorer-in-Residence and Time Magazine’s first “Hero for the Planet.” She’ll be joined by Erika Bergman, a submarine pilot who travels the world teaching people about oceans.

Fans of the show Dancing with the Stars won’t want to miss Music week, as Zendaya co-hosts. The actress and musician was the runner-up on season 16 of the hit show.

For Space week, Google has brought in NASA’s Vickie Kloeris and science writer Michael Stevens (aka Vsauce). The former is a food scientist and space food expert at NASA, while the latter writes and hosts web videos about space, food, and video games.

Lastly, Nature week will be hosted by Derek Mueller, a YouTube celebrity with more than 2.5 million subscribers, who specializes in science.

These are just a few names who will be participating in this month-long event. Stiebel says other experts from the National Park Service and National Geographic will also be contributing through “immersive livestream events” that campers can participate in.

Starting July 13, campers will log into Camp Google to participate in a weekly interactive livestream event at 12 p.m. PT. Each one will focus on one of the aforementioned themes. For the duration of each week, campers will do activities like learning why some things float or finding out how dolphins see underwater. All lessons include a quick video overview, instructions, and the list of supplies you’ll need. 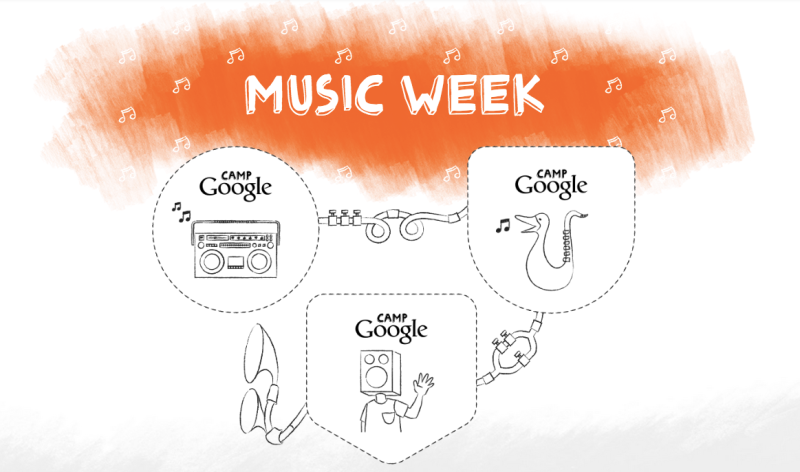 To keep campers motivated, Google is applying some gamification techniques. For each exercise you complete, you will earn a badge that you can use to keep track of your achievements. There are three sub-themes for each of the four weeks.

Stiebel says that Google checked with The Family Online Safety Institute, an international nonprofit organization whose goal is to ensure that the Internet is a safe place for kids and families, and the curriculum has received the group’s approval.

If you happen to miss a day or more, don’t worry. Google says that it will be archiving all its videos on the Camp Google site so campers can go back and access them later to keep up with the program. Of course, while it’s not explicitly stated, it’s likely that Google wouldn’t mind if parents hosted gatherings with other campers to make activities more engaging, rather than having their child sit by themselves watching the videos online.

Camp Google is Google’s most recent summer camp program. In 2013, the company partnered with MAKE magazine for its second annual Maker Camp, but that arrangement appears to have been discontinued. When asked why, Stiebel only responded, “Camp Google is our focus this summer.”

Supporting education is nothing new for Google, and Camp Google gives kids an opportunity to brush up on science, technology, engineering, and mathematics (STEM). “Google aims to inspire young people around the world not just to use technology, but to create it. To do so, we need more students pursuing an education in the sciences,” said Stiebel. Besides Camp Google, Stiebel cited Made w/ Code as another example of this.

In addition to these initiatives, Google has made other contributions to STEM education. It has awarded grants to organizations through its RISE Awards, provided millions of dollars in funding through other means, funded a number of universities through the company’s 3×3 award program, and more.

In a way, Google’s launch of Camp Google shouldn’t be surprising. After all, since the program is all about helping people discover answers to their questions, it’s all about supporting the Knowledge Graph.