Skullgirls has changed since it first came out in 2012. It’s 2 percent faster, has a better tutorial mode, five new characters, and a more dedicated community of players than ever. Skullgirls: 2nd Encore brings every update to the game to the PlayStation 4, making it the most feature-complete version of the game yet.

But while it’s one of the best fighting games for the average player to get into, it has some troubles. And though the PS4 might be the definitive version of the game, it may not be the best deal for dedicated players.

It’s easy to get into

Most fighting games teach you how to move, your character’s special attacks, their distinct systems, and a few combos. Skullgirls’ goes deeper than this. Its extensive tutorials teach you how all of these special moves fit together on a per-character basis, so you know when to execute an uppercut, not just how. It also teaches you the basics of defense, like why you should block low attacks preemptively (by holding the down and away from the opponent), and how to block high attacks on reaction.

This makes Skullgirls a great starting point for anyone looking to get into an intimidating genre. Usually, you have to watch hours of videos online if you want to get a course on how to play fighting games. And for indie developer Lab Zero to have done more to bring in new players into the fighting game fold than big companies like Capcom is impressive.

Couple this with how the combo system allows you to chain light, medium, and heavy attacks into each other with ease and you have one of the most friendly fighters around.

It’s made by fighting game fans

Lab Zero clearly loves fighting games, and it shows in the attention to detail it’s put into giving Skullgirls one of the most expansive feature sets of any fighting game to date. The netplay is smooth, allowing you to check an opponent’s connection before you play them; the training mode is exhaustive, letting you check the range and damage of every move in the game, practice combos in the corner or middle of the stage with a quick restart button, and muck with all sorts of other options.

You can also swap among controllers and map every button to your liking, with a tournament-ready mode which allows you to map the buttons before selecting your character. Lab Zero has also developed a built-in fightstick driver for the game, which means almost any PS3 or PC-compatible fightsticks you have will work on PS4 automatically. Each of these things are minor by themselves, but they add up to make Skullgirls feel like a blockbuster fighting game built on a budget, and one with the players’ interest at heart.

The small roster packs a lot of creativity

Built by a small team, Skullgirls is not going to have the 30-plus character casts of Street Fighter or Mortal Kombat. But Lab Zero has packed a ton of creativity into its 14-character roster. Even though it has obvious palette swaps, like Robo Fortune and Fukua, these color changes are more to save money on asset creation than skimping on design. The characters introduced since Skullgirls’ original release have some of the most stylish and interesting new ideas I’ve seen from fighting games in a long time. Beowulf, with his Hulk Hogan-inspired moveset and hype system, is a clear standout, but he’s in good company with Big Band and Robo Fortune. Some may be aesthetically similar, but no two characters feel alike — exactly what you want in a fighting game. 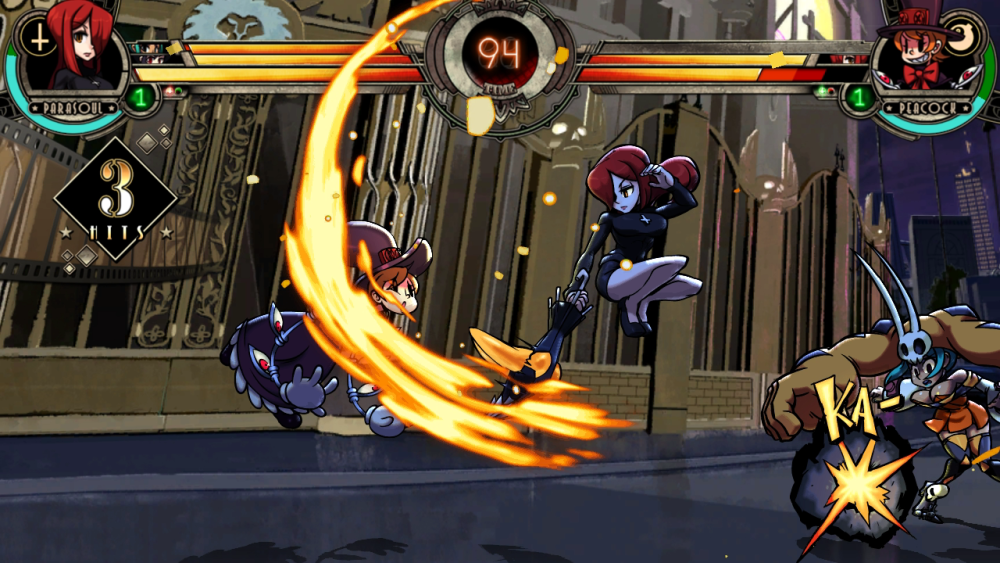 Above: Skullgirls’ animations flow smoothly into one another.

The online crowd is tough

Skullgirls might have more tools in place to teach the average player the game, but it’s still three-year-old multiplayer game — 2nd Encore is simply a port of Encore with a few extras and features in tow. This means that online, you’re bound to meet people who’ve been playing since launch. And if you don’t have some of the its longer, more devastating combos down before you start playing with them, you’re going to get destroyed. You can create a lobby and enter online training mode with friends, but don’t expect your average opponent to go easy on you. Do expect, however, to be caught in combos for longer than you might like.

The story mode is a bit of a bummer

2nd Encore adds voice acting to the original story mode, which still consists a few stills (albeit gorgeous ones) and dialogue between fights, but this isn’t always a good thing. Some characters’ voice actors (Parasoul) are better than others (Big Band). The voice acting isn’t great, which mars an already average fighting game story. The world behind the stories the game tells has a lot of potential, so I hope Lab Zero has a chance to flesh it out further with future updates.

The main cast is still divisive

Skullgirls’ art style is as divisive as it’s ever been. The artwork is beautiful, taking equal inspiration from Japanese anime and classic American animation. You can see Skullgirls’ dedication to its characters in every frame of animation, as well as why each of these characters can cost hundreds of thousands of dollars to make. But I can’t shake the feeling that giving many of the women fighters attacks which show a gratuitous amount of their underwear does a disservice to the art. Not everyone will have this problem, but as it stands, I’m a little weary of showing this to people who may not already be into fighting games, which is a shame.

It’s not a great upgrade

If you already own Skullgirls Encore on PS3 or PC, there’s little reason to buy the PS4 edition. There are a few bonus features, but if the community doesn’t fully migrate over to the PS4 version, 2nd Encore doesn’t justify the switch, especially at an additional $10.

Skullgirls: 2nd Encore is a good buy for anyone looking to get into fighting games, but it’s far from a perfect one. After picking up a lot of good knowledge from the tutorials, you may want to move to a less intricate and combo-centric game with a less intimidating online crowd. If you haven’t tried Skullgirls yet, this is this best place to start, but if you’ve already played it, there’s not much reason to switch to this version for now.

Skullgirls: 2nd Encore is now available for PlayStation 4. The publisher provided GamesBeat with a code for the purposes of this review.