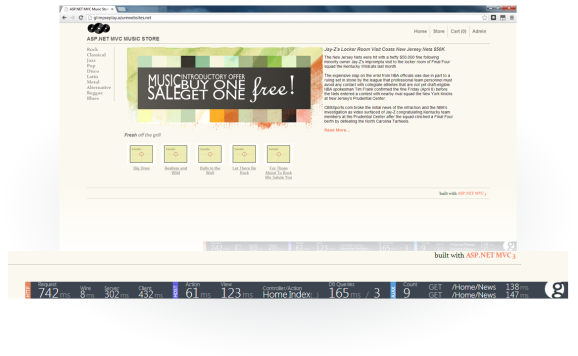 Glimpse's Heads-Up Display dashboard running at the bottom of a website.

Microsoft today announced that it has hired the two creators of Glimpse, an open-source debugging and diagnostics tool for ASP.NET applications. Until now the creators, Anthony van der Hoorn and Nik Molnar, have worked at Red Gate, which has allowed them to work-full time on the Glimpse project for the past three years.

“Since its creation, Glimpse has been used by thousands of ASP.NET developers to gain insight into the inner workings of their applications and to identify performance enhancement opportunities,” Shanku Niyogi, general manager of Microsoft’s Visual Studio Team, wrote in a blog post, regarding the news. “Once installed via NuGet, Glimpse automatically enhances ASP.NET applications by providing an intuitive visual timeline of request execution, a log of SQL queries, URL route debugger and much more; all embedded directly into the web page.”

While Glimpse does have its adherents, it’s not the most popular dev tool around these days. But that could change.

“I’m excited about the opportunity to contribute to Glimpse, and explore ways to make it a key part of the toolset for users of Visual Studio, Visual Studio Code, and Visual Studio Online,” Niyogi wrote.

Microsoft is now the sponsor of the Glimpse project, van der Hoorn noted in a post on his personal blog.

With this deal, Microsoft is making another commitment to open-source tooling, following a list of projects from .NET to Docker. Microsoft is increasingly willing to support operating systems and software outside of its domain, and acceptance of external contributions to Microsoft’s open-source projects are part of this even broader corporate shift.