Big-budget developers don’t get to take a mulligan, and few could have used a do-over more than the Electronic Arts Tiburon team that crafted the totally underwhelming Rory McIlroy PGA Tour.

The franchise sustained a major blow when its poster boy, the seemingly squeaky clean Tiger Woods, made a series of questionable decisions regarding evening entertainment. After EA cut ties with Woods, the development of a 2014 PGA Tour game never got sorted out. The team at HB Studios, which EA contracted to work on its annual golf franchise, went on to release its own independent golf game, The Golf Club, that year.

EA Tiburon took its time with the development of Rory McIlroy PGA Tour, but I honestly have no idea what it spent all of that time doing.

This game is a mess. It is extremely difficult. It lacks the customization options and expansive roster of playable characters we expect from a triple-A sports franchise — especially a battle-tested EA one. Even its highly touted real-life golf course selection is missing the Augusta National Golf Club — site of The Masters Golf Tournament and one of the most famous courses on Earth.

If you are a hardcore golf fan, this has a few things for you. If you don’t know the difference between a punch and a flop shot, then run — run far away.

Tons of ways to get your ball on the green 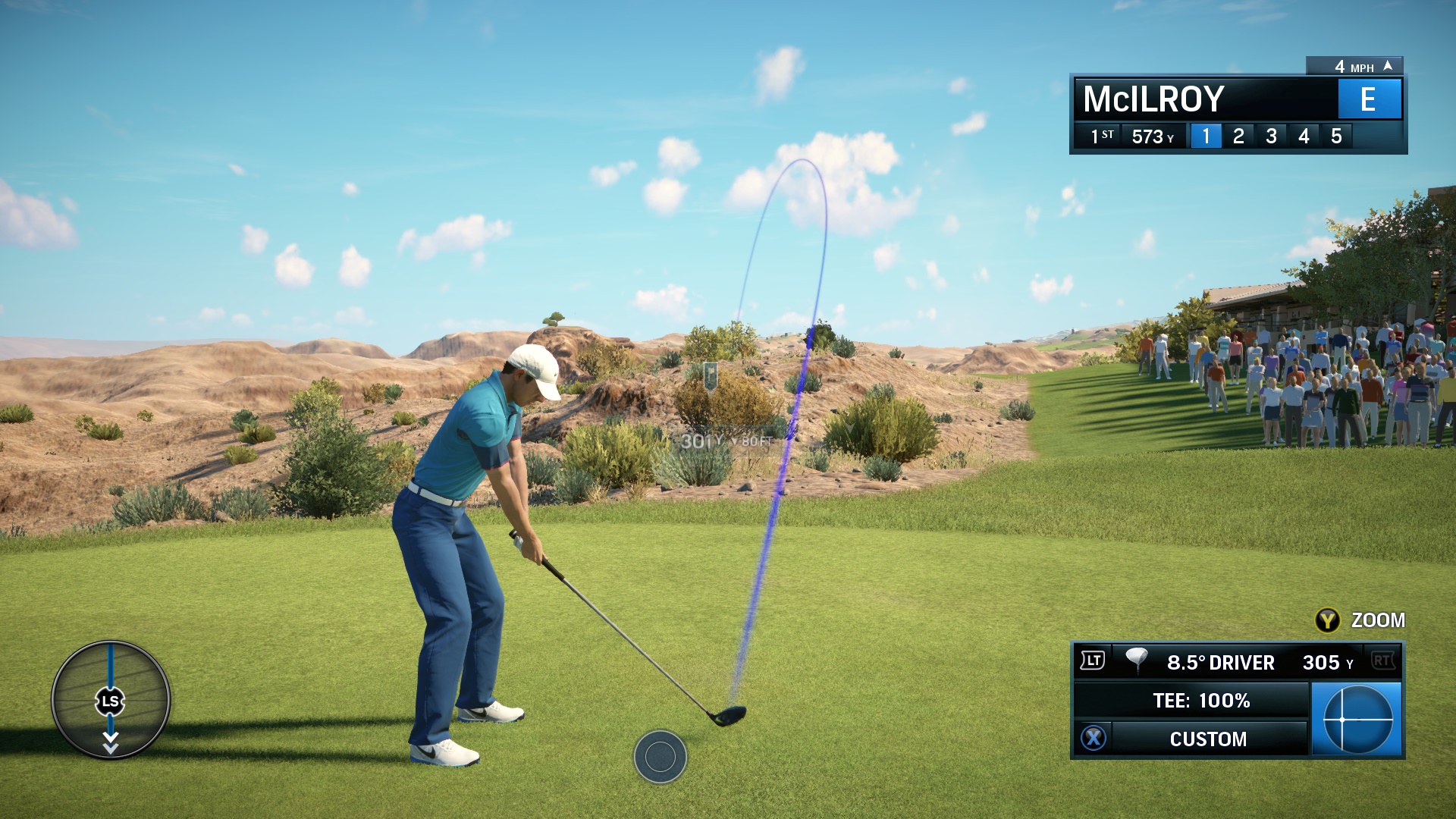 Above: The purple line indicates the arc of the shot — if you hit it correctly.

One of Rory McIlroy PGA Tour’s few bright spots is its dizzying array of shot types, clubs, and spins.

You’ve got punch shots to get you under the trees and flop shots to stop your ball from rolling. You can bend shots with the wind to wrap balls around major obstacles, or you can ease up on the shot stick to hit the ball shorter than your club’s maximum distance.

Players also have a ton of decisions to make about which clubs actually go into their bags. Choose from various wedges, irons, woods, putters, and drivers. If you are feeling especially adventurous, you can even try hybrid clubs. I think they are some sort of wood/iron mix, and frankly, it’s just not natural.

I didn’t grasp most of this customization. I am pretty sure subtracting loft from my driver made the ball go faster, but I can’t be certain. However, some of you may know enough about golf swings and clubs to make excellent use of these options.

For me, every shot that doesn’t hit the audience or land in the water is a perfect shot.

A good variety of courses with minimal loading times

It’s clear that EA Tiburon put its focus on course development, and that shines through in the final product. A dozen actual courses and five fictitious ones offer a great variety of settings.

Three of pro golf’s four most recent major tournament locations are represented. EA’s licensing deal with Augusta and The Masters tournament expired, so it didn’t make the cut.

The made-up courses are pretty fun, too. The title even features one course based on Parcel Storm, a Battlefield 4 map. You can also choose to play a strange practice course in the Night Club Challenge, PGA’s after-dark take on a typical skills challenge mode.

These various courses also don’t require loading between holes. The switch to Battlefield’s Frostbite 3 game engine allows for slashed loading times across the board. Couple this with the Quick Rounds feature, which mercifully enables you to play four of 18 holes and then simulate the rest, and you can zip through tournaments in an hour.

I enjoyed the scenery in Rory McIlroy PGA Tour. It’s a shame that we’re forced to play such impossibly hard and boring golf on these beautiful courses. 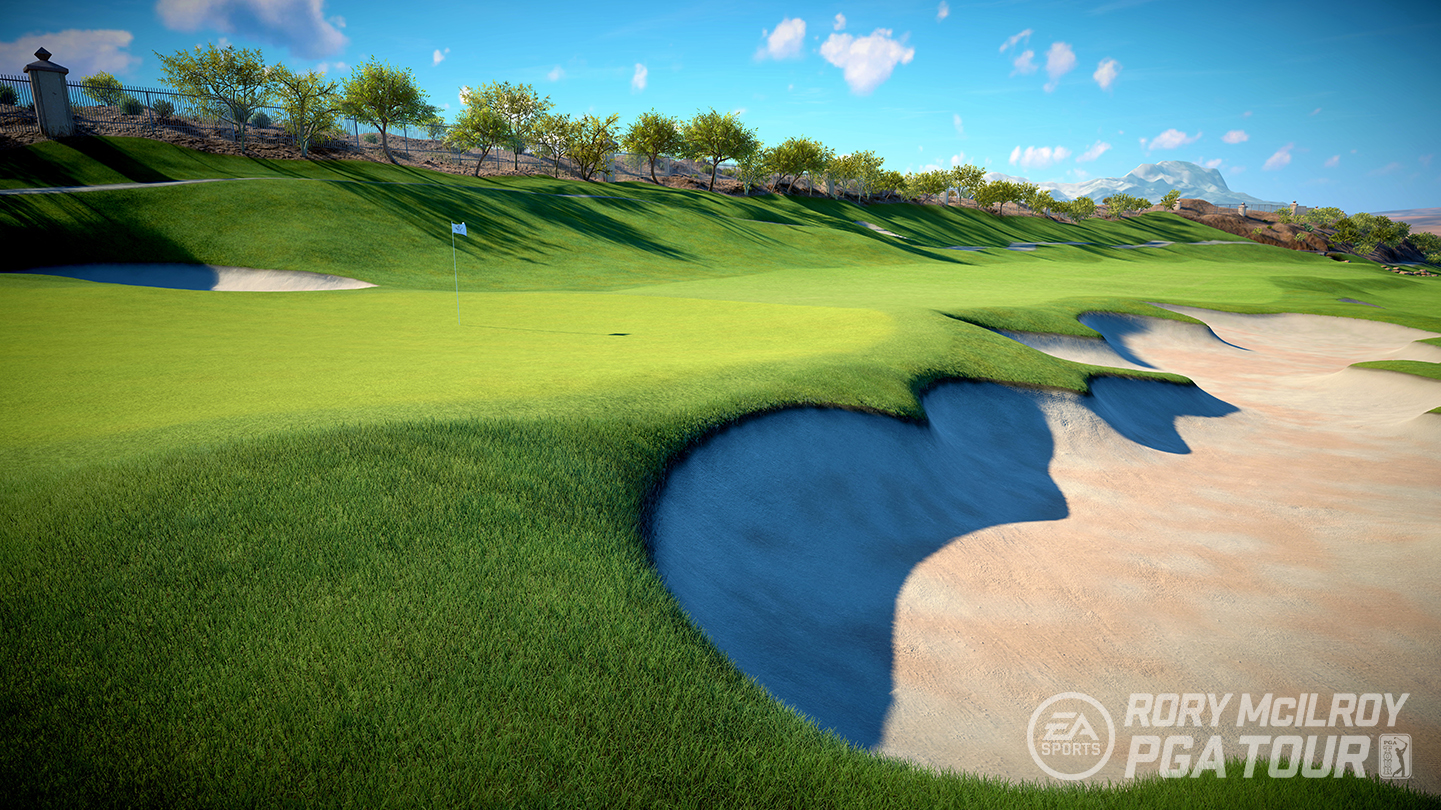 Above: An extremely green rendering of Wolf Creek Golf Course.

You may have a million ways to customize your shot before you take it, but you are totally screwed once you swing that club.

I spent most of my time playing arcade-style, which is supposed to be “for everyone.” I thought this would be an easy, fun playstyle to smash some balls and sink some putts.

It was a nightmare. And the Tour mode, the actual hard mode, is an unspeakable horror. It is the Dark Souls of sports-gaming modes.

In Arcade mode, the cursor for guessing where your shot will land is flat-out broken. It doesn’t seem to take your player’s attributes and clubs or the environmental conditions into effect whatsoever. Previous PGA Tour games would also aim your golfer in the right direction on each shot, enabling you to make minor adjustments or just pull back and let fly.

I can’t stress this enough: Never do this in Rory McIlroy PGA Tour. You will hit it straight into sandy or wet places, and those are enemies of the digital golfer.

Oh, and god help you if you shank one into the audience (and you will). The game has this crazy glitch where spectators don’t move from in front of your golfer while the golfer is shooting. So you just keep cranking it off these horribly animated onlookers, causing your ball to completely stop about 20 yards from where you hit it. It takes about four strokes to get out of this mess, which will almost certainly ruin your round. 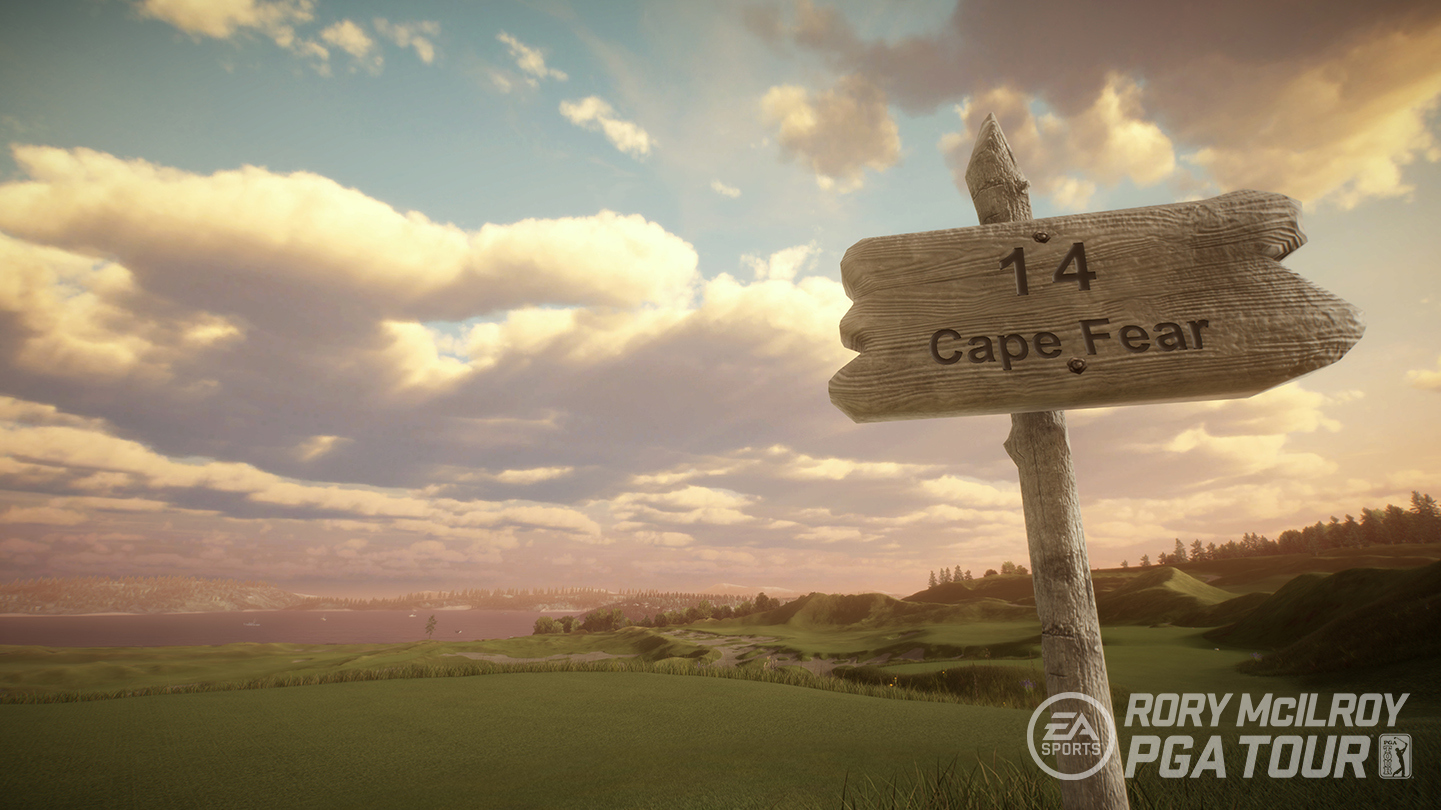 Above: A fitting sign from Chambers Bay Golf Course.

A lack of golfers and created golfer customization

Maybe I’m a sports-gaming snob, but it is absolutely unacceptable to have to choose from preset faces when creating a digital athlete. It’s 2015. Electronic Arts has the Game Face feature, which enables you to upload a picture and create your digital self for Madden, FIFA, and UFC games. Somehow, this feature got lost on the way to the links?

Not only is Game Face missing, but you have to choose between a dozen or so preset appearances for your created player. I honestly can’t remember the last time I had to do this in a major sports title.

If you don’t want to carve your own path through the green, you can choose from all of 12 actual golfers and five ridiculous made-up ones. I am not a huge golf fan, but I am pretty sure that a dozen playable characters doesn’t even account for 1 percent of the professional ranks.

The roster doesn’t include Tiger Woods. I understand this was probably set in stone when EA yanked him off the cover, but it still feels weird to play a golf game without him.

Instead of legends or more pros, we get weird soldiers and a metal dude as unlockable characters. The developers also put somebody’s grandparents in the game in the form of a playable elderly couple with low stats.

Why take a fun, silly approach in this aspect of the game but not allow players to casually rack up low scores? I want an easy and casual game mode; I don’t want to play impossibly challenging golf dressed as a soldier.

Rory McIlroy PGA Tour did not reward the patience of the franchise’s fans. Waiting more than two years for a game with shoddy shot mechanics and less than 20 playable golfers is a direct slap in the face.

Players will get to see some great representations of famous golf courses, and the diehard golf fans among them may unlock the secrets of the elusive under-par round. But most of us will share the experiences of the average recreational golfer: We will hit two good shots in a row, think we finally have the hang of it, then spend four hours cursing and breaking things.

The title may feature a popular sport and a kid-friendly rating, but this is a game for a very select few. Tee up at your own risk.

Rory McIlroy PGA Tour comes out on July 14 for the PlayStation 4 and Xbox One. EA Sports provided GamesBeat with a retail PS4 copy for the purposes of this review.