The influential works of departed president Satoru Iwata left a legacy that will live not only in the games he created but in what he taught everyone — fans, developers, and marketers — about the business of making games.

From his beginnings as a freelance programmer to heading one of the biggest gaming companies in the world, Iwata showed how great minds can revolutionize the industry. Iwata understood the importance of setting trends, not following them, even when the rest of us thought he was crazy for doing so.

Most important, he taught how anyone can pick up a controller and play a game — the idea behind Nintendo’s greatest strategy.

Everyone can be a gamer

Before the Wii and the Nintendo DS, the last time my mom ever laid her hands on a controller was around 1990. Even then, it was just to humor 6-year-old me. The only other experience she had with gaming was the occasional round of Tetris on my Game Boy. 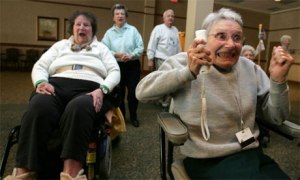 Above: The Wii and its motion controls wound up just about everywhere — even retirement communities.

Then around 2008, my mom became a Wii Sports fanatic. When she wasn’t swinging the Wii Remote in her best attempts to be Serena Williams, she was solving puzzles with Professor Layton on the DS. She was the ideal customer for the little two-screened handheld. She bought several games for her rose-colored DS Lite.

The DS’s touchscreen and the Wii’s motion controls made it possible for anyone to be a gamer. Seniors in retirement homes were enjoying Wii Sports Bowling because Nintendo decided to go against the grain. The system was a monster hit, and it happened under Iwata’s watch.

When the other guys walk a straight line, you take a hard left.

Iwata’s Blue Ocean Strategy for Nintendo meant that the game maker’s big plan was not to compete with Sony and Microsoft. Rather, it would venture through uncharted waters “free from competitors” as he called it — hence the name Blue Ocean. “We are not competing against Sony or Microsoft. We are battling the indifference of people who have no interest in video games,” he said.

When the HD console wars started, Nintendo stuck with a system that, when it came to graphics, wasn’t too far from the original Xbox. It didn’t make sense at the time, and some of us didn’t think Nintendo stood a chance.

Turns out the market agreed that fun was more important than graphics. And in the case of games like Wii Sports, simplicity trumped depth. Nintendo knew this all along.

Company leaders can be fun and approachable

Iwata came from a different background. He began as a freelance programmer for HAL Laboratory, eventually joining the studio and having a part in the development of Balloon Fight, EarthBound, and the Kirby series. He was a leader who had real experience in making games.

Even when Iwata served at an executive capacity with Nintendo, he was not above diving into coding. Before the release of Super Smash Bros. Melee for the GameCube, Nintendo worried that the game would not ship on time. Iwata jumped in and did some debugging, ensuring that it made its planned launch.

Iwata Asks, a web series in which the president interviewed his development teams, highlighted his close relationship with Nintendo employees.

Tweets of first-hand accounts with the corporate further showed his friendly demeanor:

I met Mr Iwata once in an elevator at E3, & even though I was a Nintendo nobody, he chatted with me for a minute & couldn't have been nicer

I met Mr. Iwata in 2013 checking into a hotel. No one recognized him. Carried his own bags. I nodded and said "Balloon Fight?" He grinned.

Nintendo Direct broadcasts, which were periodic videos that the publisher streamed, sometimes featured him wearing Luigi hats. He even ventured into meme-worthy self-parody as he held a small bunch of bananas. 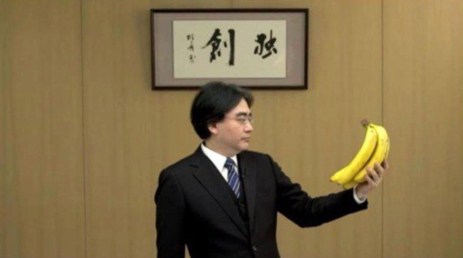 Above: Iwata holds a bunch of bananas during a Nintendo Direct.

Most of all, his dedication proved that hard work can take someone to the top.

Don’t be afraid to take a fall, admit failure, and continue on

Iwata wasn’t afraid to fail. For as much as naysayers claim that Nintendo likes to play it safe, many of those same critics scoffed at the Wii’s trendsetting motion controls (Microsoft and Sony eventually followed with their own answers to the Wii Remote). Sticking to a standard- definition system with online capabilities that seemed like a kid’s stuff when compared to the other two major consoles was a bold move that could have immediately backfired.

Still, Nintendo saw some of its lowest points during Iwata’s time as the boss. The 3DS wasn’t an immediate hit, and the Wii U continues to struggle. It’s unfortunate that Iwata never had the chance to see an upturn before his passing.

Even then, Iwata wasn’t afraid to admit fault. He made it clear that Nintendo took fan feedback seriously after criticism for its E3 2015 showing, and he apologized to fans for Amiibo shortages.

Accountability starts at the top

Iwata knew that accountability started with him. He took much of the responsibility for the Wii U’s poor sales by announcing that he would cut his pay in half for the next several months. Other Nintendo executives also took a reduction in salary.

Iwata stayed loyal to his company until his last days. It seems the old saying about the captain staying with his crew rang true with the Nintendo boss.