Crowdsourced wireless coverage startup OpenSignal has launched its free-Wi-Fi tracking app on Android, two months and 150,000 downloads after it first arrived for iOS.

WifiMapper for Android taps OpenSignal’s arsenal of existing wireless network data and places it in a new standalone app, one designed to help you find all the public places that offer Internet access gratis. 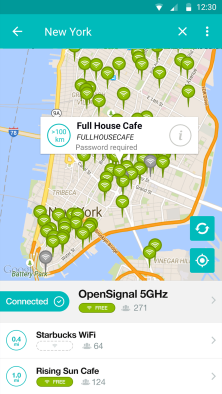 If you’re new to OpenSignal, the London-based startup was founded in 2010 and has built a solid reputation based on its main app on Android and iPhone, which monitors the speed and coverage of mobile networks. With 10 million downloads to date, the crowdsourced data it passively gathers offers an independent view of the state-of-play with networks — rather than believing the data provided by the companies themselves.

Additionally, OpenSignal also tracks when a user is connected to Wi-Fi, offers in-app tools that let you test your speed, and reveals where public Wi-Fi networks are nearby. And it’s this data that feeds into the WifiMapper app.

One of OpenSignal’s key challenges in creating this app lies in knowing whether a Wi-Fi network is “free” or not, which is why it’s asking users to manually “tag” a hotspot as such. But that in itself may be difficult to scale quickly, which is why OpenSignal also includes networks that it believes are free. 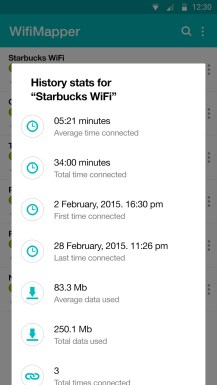 OpenSignal basically guesses this using data from the main OpenSignal app — if a lot of people have connected to a hotspot, there’s a high chance that it’s free.

Moreover, WifiMapper also integrates with Foursquare data, which may already indicate whether a cafe or pub offers free Wi-Fi, while simultaneously tapping additional useful data such whether the coffee is any good or if it offers baby-changing facilities.

As of today, OpenSignal has mapped 500 million hotspots around the world, but only 6 million of these have made it into WifiMapper, based on the likelihood that they are free to use.

There are a myriad of similar apps out there already, but given OpenSignal’s existing data and the way it blends this with Foursquare, WifiMapper is a particularly compelling proposition for those seeking to avoid expensive roaming charges while abroad, or those with a limited 3G / 4G data plan.

While its new app is largely the same as the iOS version, there are a few unique features in WifiMapper for Android.

For example, you’re able to connect to a Wi-Fi hotspot directly through the WifiMapper app, rather than having to navigate to your network settings. Also, you can view a comprehensive history of all the Wi-Fi networks you’ve connected to — the locations, durations, and data consumptions. It’s basically a Wi-Fi connection diary for geeks.

Some interesting new features are in the works too, for both Android and iOS. For example, you’ll soon be able to share passwords with fellow WifiMapper users — this means you can connect to a cafe’s network without having to ask the person behind the desk. Plus, an option to make hotspot maps available offline will be added, which will obviously be useful for those on the move who are unwilling to use 3G to see where the free connections are.