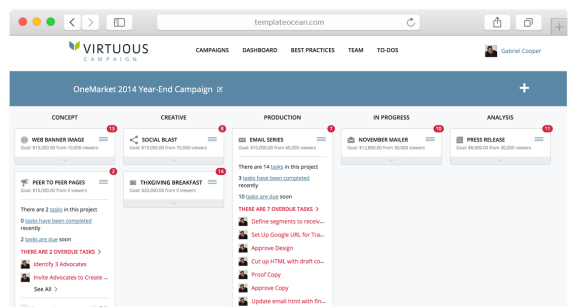 It’s no surprise that every industry has some form of customer relationship management (CRM) tool, including the nonprofit space. Keeping in touch with donors is especially important, and one company that wants to take advantage of the market is Virtuous Software. To help it get started, Virtuous announced that it has raised a $700,000 seed round from investors.

The company’s investment comes from several firms, of which Access Ventures leads. While $700,000 may pale in comparison to the millions of dollars companies typically raise in such rounds, Virtuous Software CEO Gabe Cooper points out that he’s not using the money to build out a product — it’s already built, thanks to bootstrapping the company for more than a year.

“I wanted to be surrounded by a group of folks committed to helping us grow,” said Cooper in a phone interview with VentureBeat. He intends to use the new funding to accelerate growth and for marketing purposes.

Based in Phoenix, Arizona, Virtuous Software is the provider of a CRM that wants to help charities build better relationships with donors and create good in the world. Cooper believes that new technologies are needed because existing infrastructure being used by nonprofits is outdated: “These organizations are solving some of the world’s toughest problems — and it’s critical that they operate efficiently and maintain transparent relationships with their givers.”

Sometimes called a donor management tool, nonprofit CRMs can certainly make or break an organization. And there’s no shortage of options against which Virtuous Software will have to contend, including DonorPerfect, Salsa, Blackbaud, and Salesforce. In terms of appearance, Blackbaud and Salesforce seem to be market leaders, with the former having a $2.75 billion market cap and the latter having $46.67 billion.

Cooper explained that Virtuous Software’s model is akin to HubSpot in that it’s targeting small and medium-sized businesses as well as nonprofits. It has 160 nonprofit customers throughout the U.S., and it’s targeting those with operating revenue between $1 million and $10 million. The average fee that the company charges is $100 per user per month, with most organizations spending at least $10,000 a year.

It’s certainly competitive for CRM companies to get their foot in the door for the nonprofit marketplace, but if they can, it’ll be great for their bottom line.