How do you spend your summers? Well, let me tell you about mine.

Every July, I rent a large moving truck and fill it with a bunch of arcade equipment sitting in my garage. Then I drive that truck down to the Hyatt Regency convention center in Santa Clara, California. Once there, I meet up with other like-minded hoarders of coin-op machines who have brought their own moving trucks full of games.

We unload, cuss, sweat, solder, glue, and bolt everything down inside a large convention hall. Then we invite the general public inside to bang around our machines for two days straight, before repeating the process in order to bring our gems back home.

I’m talking about California Extreme. It’s part game show, part massive arcade, and part therapy session for those of us that hoard these giant electronic beasts.

Since this an event put on by collectors, California Extreme can also provide a great opportunity to play rare and unusual games that you won’t be able to find anywhere else.

If you’re thinking of heading to this year’s show (July 18 and July 19), I’ve compiled a small list of six rare, cool, and interesting games that are worth checking out.

Keep in mind that there are hundreds of games at California Extreme each year. This list would be at least 10 times longer if I mentioned everything worth checking out. So keep a sharp eye and an open mind while at the show. 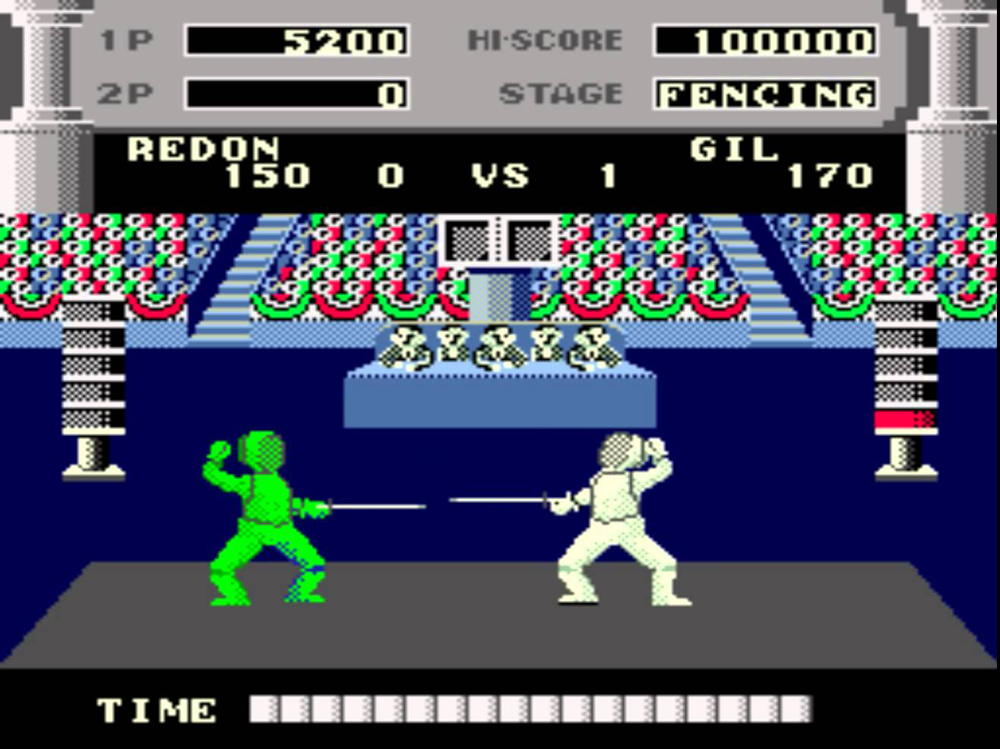 Above: Have at you, scrub!

Great Swordsman is a single-player fighting game that … wait, where are you going? Come back here! Listen, I promise that you won’t be disappointed by this.

Great Swordsman is a 2D fighting game that puts the player through three eras of sword-fighting (Fencing, Kendo, and Gladiator) spanning 15 levels. You can’t block or jump, and it has no special moves (and definitely no Ultras). The player can only move forward and backward with the stick and can attack with one of three buttons representing the vertical plane: high, mid, and low.

It sounds rudimentary and limited, but this is the most footsie-intensive ’80s-era game I have ever seen, and yes, I am counting Karate Champ with that statement. “Footsies” is a tactic from fighting games in which a player is trying to fake their opponent into making a bad move, which they can punish their foes for big damage. In Great Swordsman, the player is trying to fool the computer into choosing a specific vertical plane to attack, which will open it up for a counter somewhere else.

Adding more depth to the mind games, move animations are tied to how long the player holds the button down. So I could try to fool the computer by holding a high attack and then let go of the button mid-animation and try to activate a low stab instead. It’s like faking rock, but then suddenly sticking your two fingers out to create scissors, then pulling them back in order to form rock again. It’s a shame that Allumer did not have the foresight to create a two-player, competitive version of this game. 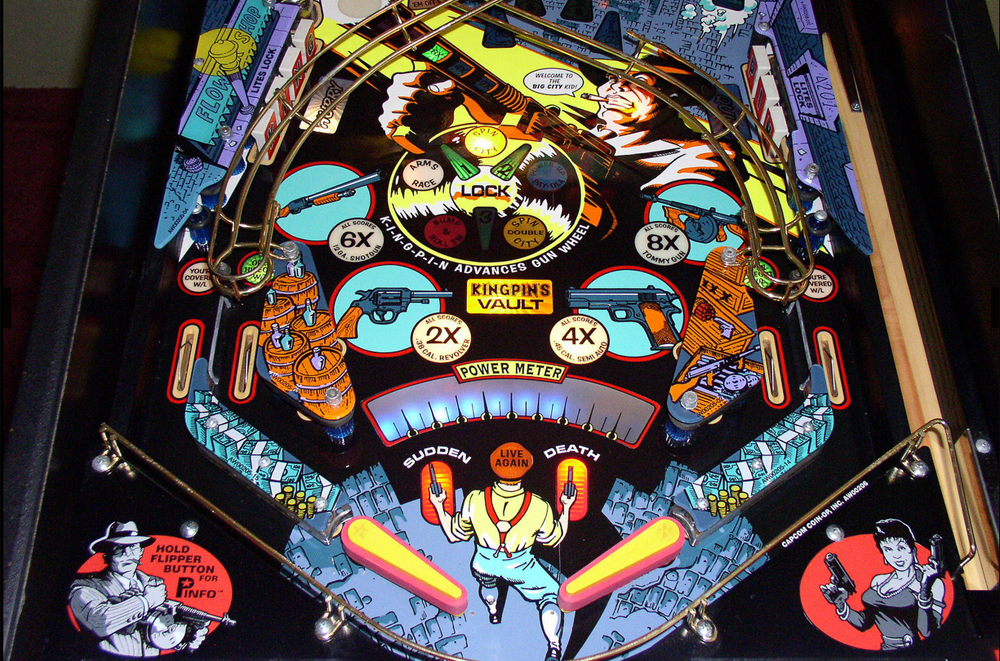 Above: Capcom art direction in a pinball machine? How did this concept not take off?

It may be difficult to believe, but Capcom was once in the pinball business. And no, I am not talking about the Street Fighter II pinball machine that Gottlieb licensed from Capcom.

The Japanese company famous for its video game franchises had a legitimate group of pinball designers and artists on the payroll. And although the division only pumped out five games before closing down shop, those that made it out the door are considered high-quality products in the pinball world.

Which brings us to Kingpin. This was the last game to make it out of Capcom’s pinball division before the shutdown, and roughly 10 tables exist (many of which are in various states of prototype). The one that regularly makes the trip to California Extreme is considered one of the later production models, with much of its code and design sitting in a finalized state.

The pinball game takes place in Prohibition-era Chicago, where the player is put in the role of a two-bit thug trying to climb the ranks of the local mob. Completing modes, such as collecting weapons or moving contraband, will put the player into a showdown against rival criminals. Eventually, after gunning down all rivals, the player will face the Kingpin himself and raid his secret stash.

Kingpin featured some cool ideas peppered throughout, including a working slot machine and a sudden-death electric-chair mode where power to the flippers slowly die out. 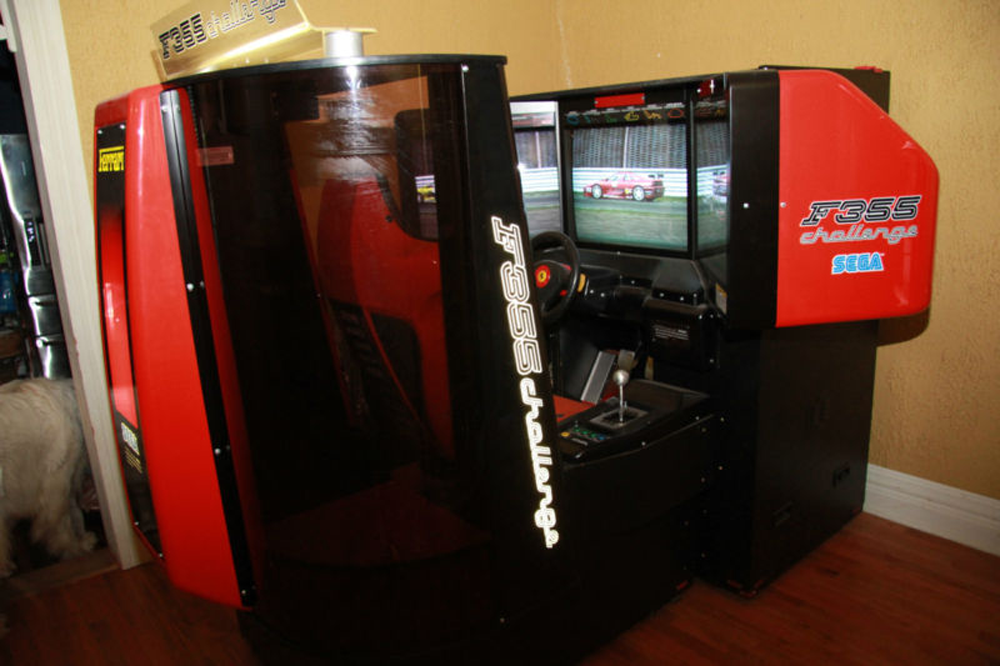 Above: Yu Suzuki is obsessed about two things: Shenmue and Ferraris.

F355 Ferrari isn’t so much an arcade game as it is a manifest of Yu Suzuki’s passion for Ferraris. It’s a cabinet that is designed under the guidance of a Japanese man’s obsession for Italian sports cars and is less a practical, reasonable piece of coin-op equipment.

The unit screams eccentricity, with a replica Ferrari driving seat, steering wheel, seat belt, shifter, and working brake light in the back (so everyone in the arcade can be aware of when you’re braking). It uses three 25 inch CRT monitors handling 12, 1, and 11’o clock views from inside an enclosed cockpit. Although this was a normal setup for simulators of the time, and may not seem so strange in today’s multidisplay friendly future, it was considered major overkill for arcade operators who only wanted to deal with the more cost-effective, one-display-per-unit machines.

A home version appeared on the Dreamcast, which featured cross-platform save via the console’s Virtual Memory Unit (VMU). Although there’s nothing wrong with enjoying the Dreamcast version, the magic of this game is completely lost without sitting in one of Suzuki’s insane custom-built shrines to the Italian sports car brand.

Above: Rarer than an original Black Lotus card.

Image Credit: Acclaim/Wizards of the Coast

Picture if you will: It’s the mid-1990s, and a little trading card game called Magic: The Gathering has revolutionized the tabletop gaming industry. Suddenly, a card game about wizards and dragons becomes the next hot IP, and every publisher in the video game industry is clawing each other for the chance to license the franchise. Acclaim eventually wins out and gains a licensing deal, so it puts together a tiny team to develop a Magic: The Gathering-themed arcade game. It sounds like money in the bank, right?

The Magic: The Gathering game that Acclaim developers put together took everything card-like out of the concept and turned it into a weird trackball action title. Players take control of one out of three wizards, representing the five elements in Magic: The Gathering, and toss spells at each other in a Warlords-esque arena (Warlords being another game you should check out). It’s not a completely hopeless endeavor, but when people think Magic: The Gathering, they definitely don’t expect this.

The only prototype unit known to exist hit Sunnyvale Golfland (in the San Francisco Bay Area), where it was so poorly received that it was abandoned and banished to backroom storage. I can confirm this, as I remember seeing the poor husk being used as a shelf for trash, sitting next to the bathrooms during a Street Fighter tournament held there (it’s a small world!).

Before Golfland employees could get to dismantling and converting the cabinet into a more lucrative game, a local collector was able to save the unit and has been bringing it to CAX ever since. It’s a strange game, for sure, but seeing as only one is known to exist — it’s worth playing at least once if you’re at the show.

Above: “What do you mean I have to be ‘jumped in’ to the Nintendo gang?”

To promote the animated feature Wreck it Ralph, Disney had an actual video game version of Fix it Felix Jr. developed for web and mobile devices. Their creative team decided to take things one step further and actually created a handful of arcade units, using old Nintendo arcade cabinets.

Disney used these cabinets strictly for marketing purposes, and they made special appearances at various locations. An original, functioning, Fix it Felix Jr. is considered quite rare and is worth a lot of cash to the right collector.

Luckily, generous members of the arcade-collecting community have created reproduction Fix it Felix Jr. artwork, along with a way to run the game on a PC installed in the cabinet. So anyone that can find an old, unloved Nintendo arcade cabinet and can create their own Fix it Felix Jr. unit that is nearly identical to the marketing prop.

Although the Fix it Felix Jr cabinets that show up at CAX usually aren’t one of the rare movie props, but rather one of the lovingly refurbished reproductions, it’s still a cool treat to get to experience an otherwise incredibly rare game.

Have you ever found yourself in a situation where you’re racing a sibling toward a doorway and you both wind up there at the same time, so you shoulder shove each other in an attempt to squeeze through first? This is essentially what playing Panic Park is like.

The cabinet contains two handles (red and blue) attached to individual levers that can swing horizontally. Each player grabs a handle and controls their avatar onscreen via swinging the handle left or right. Minigames often involve trying to jockey for space near the center of the screen, which means a lot of physically trying to shove the other player, in real life, out of the way,

On paper, the game sounds much more violent than it actually is. Yet at the same time, it’s more involved than just twirling a stick around. My recommendation for anyone feeling timid about stepping up to Panic Park, is to try it against someone your own size.