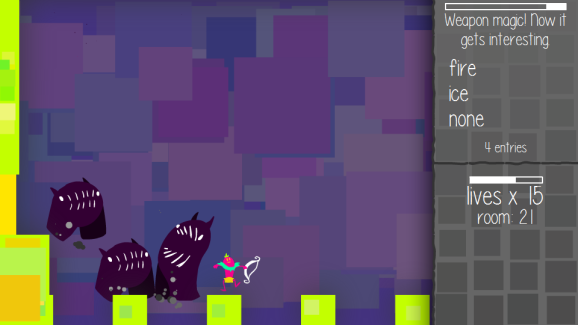 Choice Chamber is on sale now.

A developer has built a game with Twitch chat integration from the start, and now it has unleashed that creation on the world.

Choice Chamber is out now on Steam and the Humble store, and it enables Twitch audiences to participate in the game of a broadcaster. While this is similar to the horror game Daylight and the rigged-together Twitch Plays Pokémon livestream, development house Studio Bean claims that this is the first original release built from the start to incorporate Twitch. That video site has millions of viewers who spend hours watching gaming content every day, and games that catch on with that community often benefit from higher sales.

Choice Chamber started in development in 2013, according to developer Michael Molinari. Then in March last year, Studio Bean took the game to Kickstarter with the hopes of bringing in enough cash from the community to finish development. That led to Twitch reaching out to lend aid.

“Twitch has been supportive since day one,” Molinari told GamesBeat. “They even helped fund a quarter of the Kickstarter last year.”

Now that Choice Chamber is out, and it’s up to the community to turn it into a success. This is something that has happened previously with games that developers built with Twitch in mind. Take  the intentionally buggy and silly game Goat Simulator from Coffee Stain Studios, which the developer intended to appeal to people making gaming videos. And that helped it go on to sell more than 2.5 million copies on PC and mobile.

Studio Bean is the latest company hoping to ride the wave of Twitch streamers to the bank.