That’s all I’ve got so far by using Beme, a strange new app from Casey Neistat, a compulsive autobiographer and Professional Internet Person.

The app, pronounced “beam” but also cleverly doubling as “be me,” basically operates like an early version of Snapchat. As Neistat succinctly explained, “There’s no preview, there’s no review, and there’s never a need to look at your phone.”

(In fact, it’s much quicker to list the very few things that Beme does do.)

Once you’re in, you see a disappointingly bad UI. Instead of elegant simplicity, you just feel like there’s a major part of the app you can’t seem to access.

Beme makes interesting use of your iPhone’s proximity sensor. The screen goes dark when covered and begins recording automatically. So, instead of holding a phone — the dreaded Black Mirror — between you and your subject, you place it over your heart like a bizarre Pledge of Allegiance and hope everything works out OK.

You get four seconds. That’s it.

Vines are tightly edited to boost context. Beme is instantaneous and aimless, and then it’s over.

The app’s header says “X people spent X seconds being you.” That’s great, but were they “being” me or were they watching me fumble around, unaware of what’s in my frame? 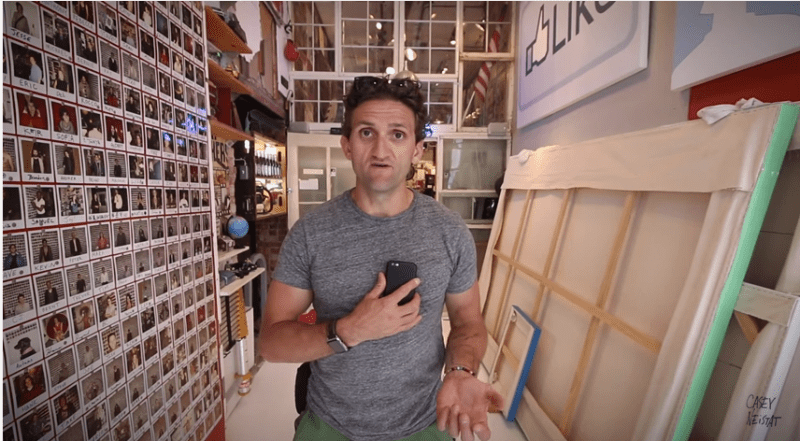 The video you take, whatever was captured, gets posted automatically to your friends (assuming they aren’t waiting for an artificially limited access code).

The gist is to share moments while remaining in the moment. Neistat wants us to capture little snippets of our lives without a phone screen always in the middle of things. Each clip is only viewable once and expires after 24 hours. You say hello and goodbye in four short seconds and that’s it. There’s no “Story” for assigning a longer shelf life to certain clips.

You can, however, reply with “feedback” by tapping the screen mid-video to send a selfie from your own front-facing camera.

(Not to spoil anything, but my “feedback” will always be me, probably shirtless, staring into my screen with a double chin. Enjoy!)

Beme also aims to remove the temptation to filter and Photoshop ourselves to death. Our Instagram feeds are cherry-picked representations of our lives that engender a fictionalized version of ourselves.

The idea is fascinating, but it’s just silly in practice.

You just take your phone out, press the home button, enter your password, run the app and then capture the moment without interrupting it.

The problem is that Neistat’s dogged pursuit of “authenticity” is the same shaky-cam faux-reality that makes all those Paranormal Activity movies so tiresome.

You know what’s nice? A photo of your friends who went to the beach together on a beautiful day. They pause their fun for a moment to put their arms around each other and pose in front of a setting sun, thanks to a self-timer or an accommodating stranger.

You know what sucks? Shaky, impermanent footage of the tops of their heads that are overexposed because the sunlight blew out the camera’s metering.

Look, I get it. It’s vain to use eight apps to really nail that Instagram of your brunch. But I also like framing.

Your brain’s memories aren’t factually authentic, so why do you want to capture real memories if they look like garbage?

As long as we’ve got a device in our pocket instead of, say, implanted in our corneas, this just won’t work out.

What about the Apple Watch, you say? Put your arm straight up in front of you for four seconds and tell me how natural that feels.

In an interview with the New York Times, Neistat (accidentally) illustrates this point: “How would I look if I were just talking to myself in the mirror? If I’m in the stands at a U2 concert watching Bono, how can I capture this moment without interrupting it and making it fake?”

You would look weird, because talking to yourself in the mirror is a weird thing to do, and it is best done alone. As for your shaky U2 concert footage with poor audio: Nobody is going to watch it because smartphone concert footage is the worst. With your phone against your chest, now we get terrible U2 audio and the back of the tall guy standing in front of you.

But there are other issues at hand as well:

Apart from the vids & disclosing your exact location, all content is retained by @bemeapp indefinitely, even after account termination #beme

Beme still has a long way to go. In the YouTube announcement for the app, Neistat himself even calls it a “hot mess.”

Or maybe it’s just that Snapchat and Periscope are still infinitely better and more useful. Either of these could employ a proximity sensor trigger, leaving Beme a victim of its own conception: “viewed once, then gone forever.”