I had fun playing Tembo the Badass Elephant, but I just wish it wasn’t so easy and shallow.

It’s a five-hour 2D platformer that fails to introduce anything new, and it’s just not as good as similar games released in the past year, like Shovel Knight and Ori and the Blind Forest. It’s just not that exciting. But despite being terribly familiar, it’s still a competent platformer that can be a joy to play, and it has a charming elephant for a main character (Tembo) who’s a parody of Rambo. Yes, I’m not making that up.

Above: Peanut butter makes the whole world go round.

Tembo is perhaps this platformer’s biggest strength, and it’s the one original idea developer Game Freak was able to come up with. When an invading enemy force called the Phantom Army takes over what I presume is planet Earth, the military has but only one option — to call in Tembo to kick some evil butt. He’s a blue elephant that sports a red bandanna, and he has some serious fighting skills. Besides his pleasing aesthetic, the smorgasbord of animations for Tembo are hilarious and wonderfully realized, such as the way he jumps and floats in the air or how he uses his trunk.

It’s all great fun, and these animations make up for how Tembo can’t speak; they do a great job of giving him personality. He reminds me a great deal of the days when mascots like Crash Bandicoot, Sonic, Banjo, and Conker were all the rage. What is even more interesting is that Sega is publishing this game, and it looks as though it might have finally found its replacement for Sonic.

While not as stunning as Ori and the Blind Forest, Tembo still looks beautiful, with bright color palettes that pop. Tembo himself looks like a Looney Tunes character, and the enemies are also irresistibly quirky and eccentric. It has several different settings, and they all look distinct, each with a specific charm. One level takes place in some sort of ’70s disco club that doesn’t look like anything else in the game.

Tembo the Badass Elephant instantly reminded me of Saturday morning cartoons, more specifically stuff from Cartoon Network like Codename: Kids Next Door and Johnny Test. And the light tone that it exudes complements the art style it’s going for. I mean, Tembo eats a peanut butter jar to regain his health, for crying out loud! 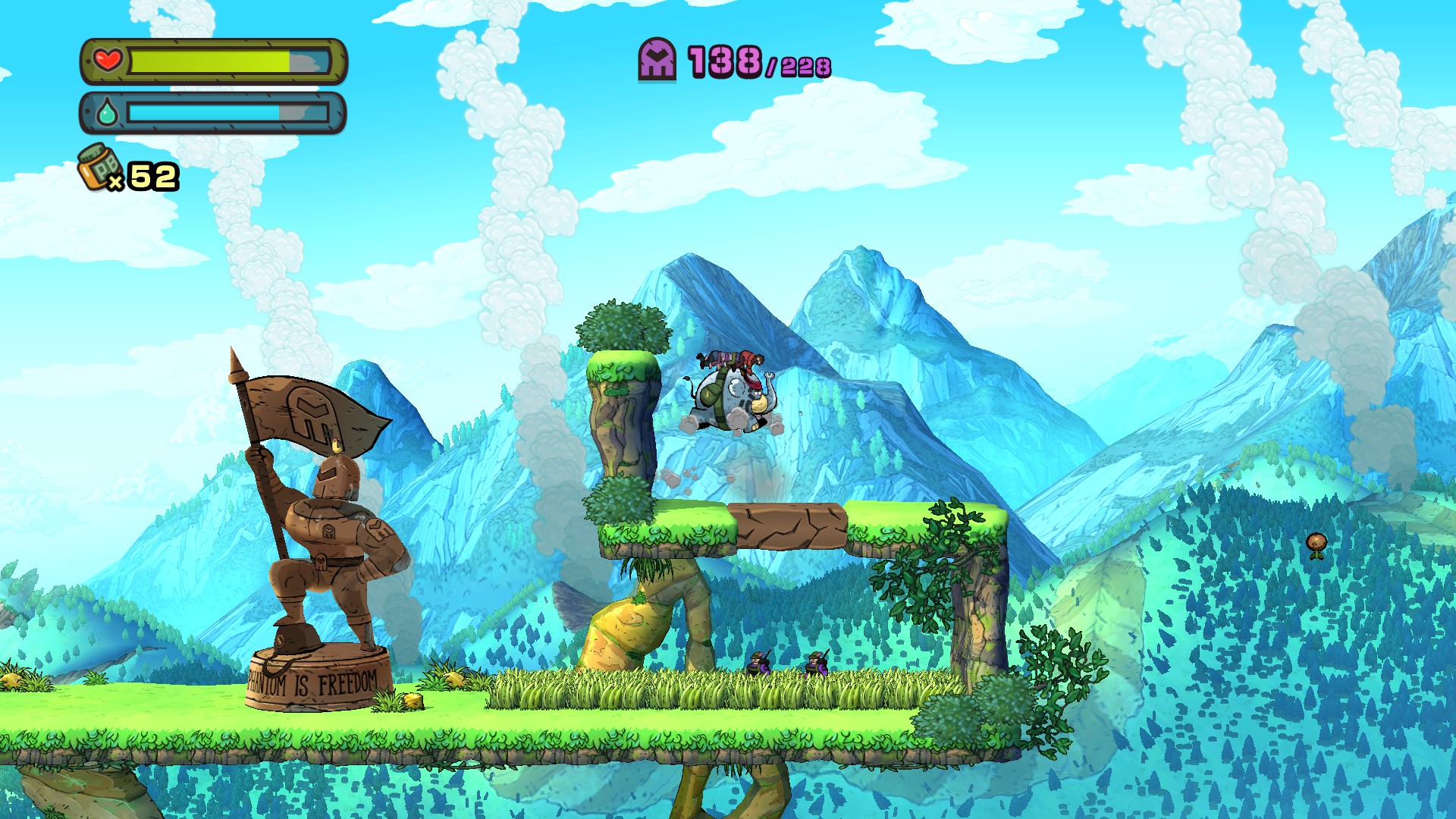 Pretty much anyone can pick up Tembo and have a good time playing it. Its satisfying tutorial expertly introduces all of the core mechanics, and none of it overwhelms. Tembo can dash continuously by holding down the Square button; he can jump, bash enemies with his trunk and put out fires, and do devastating barrel rolls. Defeating enemies while controlling a powerful elephant never got old, and the enemy design has enough variety that it remains interesting and avoids repetition.

It has 14 levels, each containing peanuts to collect that are the equivalent of gold coins in the Mario games. Collecting 300 grants you an extra life. You also can find up to 10 civilians to rescue in each level, so this adds to its replayability.

Every single one of Tembo’s moves use the Square button, and that is one strange decision, especially considering that it never uses Circle or Triangle. This results in Tembo doing a barrel roll when I really wanted him to jump after dashing (and other issues). It creates moments of frustration that could’ve been easily avoided if, let’s say, you hit Circle for dash. Worse, it has no way for you to reconfigure the layout. 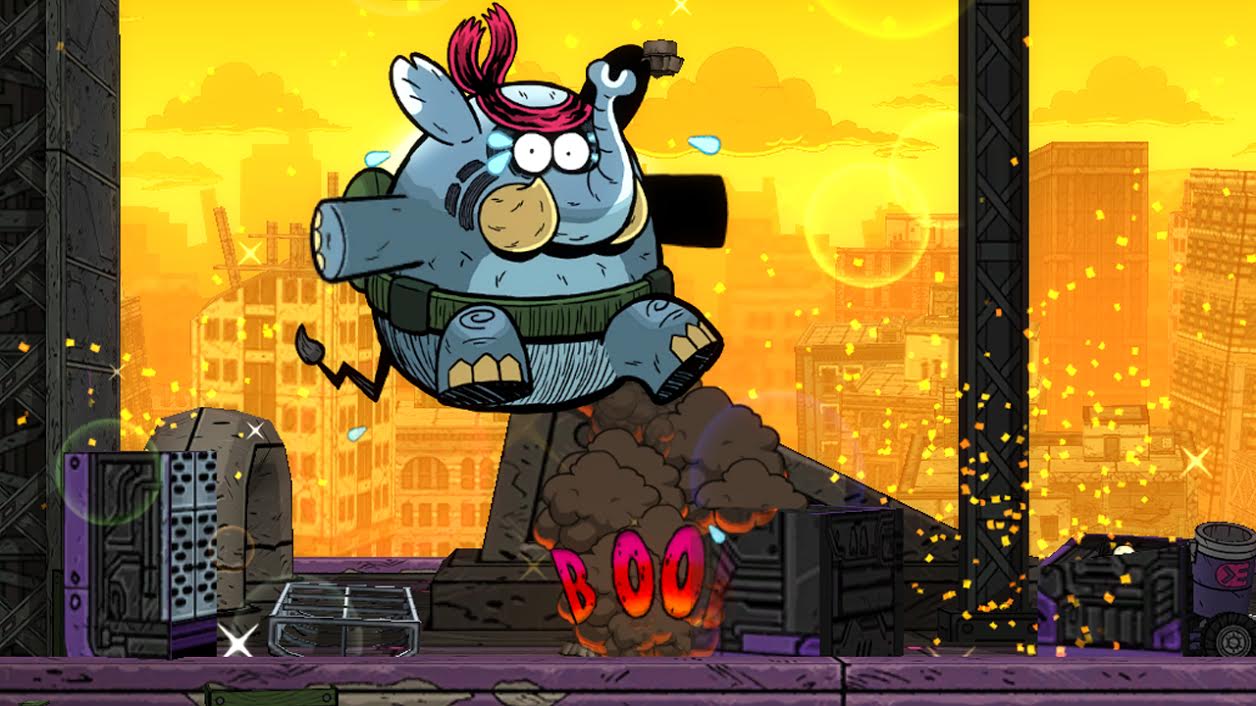 It’s not challenging and too simplistic

Tembo and the Badass Elephant isn’t hard. Folks that are awful at 2D platformers should be able to complete the game without a fuss. It never evolves from being a by-the-numbers platformer that feels almost half-baked, devoid of any surprises. The first four levels are a clear indication of what the rest of the game looks like — the later stages just have a little bit more enemies to defeat. The boss battles (four in total) are repetitive, uninspiring, and are also way too easy. It took me less than 20 seconds to defeat the first boss.

Take something like Rayman Legends: It manages to constantly introduce new mechanics, enemies, and clever level design into the mix every chance it gets, and its boss battles are quite clever. Tembo and the Badass Elephant is the opposite. That’s a shame, because the foundation is there for something much greater.

Tembo the Badass Elephant is almost worth it for its fantastic protagonist alone — almost. But it wastes its full potential. Nothing’s awful about it; it plays well, runs great, sports a fantastic aesthetic and main character, and can be great fun.

But since many similar games like Shovel Knight offer more content, a greater challenge, and actual innovation, why would a person ever purchase Tembo the Badass Elephant? The one exciting thing here, though, is that a full-fledged sequel could finally, legitimately end Sega’s overreliance on Sonic.

Tembo the Badass Elephant comes out on July 21 for the PlayStation 4, Xbox One, and PC. Sega provided GamesBeat with a digital PS4 code of the game for the purposes of this review.