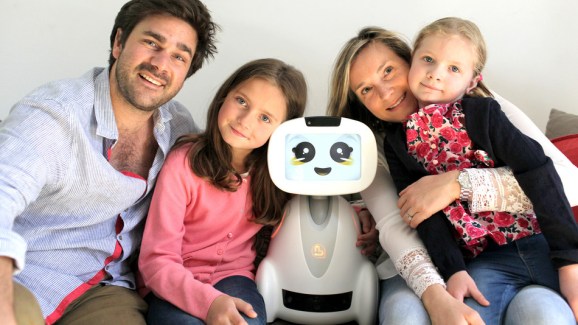 Each week our friends at Backerjack highlight a cool, crowdfunded gadget. This week we look at Buddy, which has more than doubled its original $100,000 goal.

There are a growing number of multi-function robots on crowdfunding sites. While some, such as JIBO, may strike consumers as too robotic to warm up to, others, like the Personal Robot, may be rejected as too creepy because of their attempts to seem human.

The WALL-Eish Buddy might just manage to avoid both of those problems, because this new social robot, which is designed to be a family companion, is fairly cute. The robot’s face is featured on an integrated tablet, and its wide eyes and small mouth make it appear a bit like a friendly cartoon character. Preliminary tests with the Institute for Children with Autism found that its kid-friendly appearance makes it a good companion for such children, according to Buddy’s Indiegogo page, inspiring a special needs package as an $899 perk.

The open-source, connected robot was designed as a modular platform and can be expanded with accessories that initially include a docking station, a pico projector, and an arms set. Using facial recognition, Buddy will remind family members of important events and also remain on the prowl for potential dangers inside and outside the home. It can communicate wirelessly with other devices, including Nest and other smart home devices, via Bluetooth and Wi-Fi. Although its tablet is Android-based, its app will also work with iOS and Windows mobile devices. The Buddy Classic Edition, shipping in July 2016, will cost $749 retail, but there’s an attractive early bird price of $549. Its maker set a campaign goal of raising $100,000 by August 12, but it has made it to its fifth stretch goal with 23 days still to come.

Buddy marks an advance in the progression of agents from Siri to Amazon Echo, as it moves and interacts proactively. It should be especially appealing to families with children, but at least some of its functionality may be best suited to those with development skills. To use its software development kit, prior knowledge of 3D Unity, C++, C#, and the JavaScript programming languages are all beneficial, according to its maker. Beginners, however, should be able to create simple apps.

To keep up with the latest crowdfunded tech innovations, sign up for the Backerjack Daily Digest.