In the creative world, there can be irritating problems when designers and developers need to communicate with one another. If nothing else, it’s a time-consuming process and requires more work than is probably needed. Naturally, this raises the question: Shouldn’t there be a way to make things simpler?

Zeplin hopes it can be that solution, and it’s launching today. This Y Combinator-backed company offers a nicely designed interface that will provide developers with the information they need in order to program the website or app they’re working on. Designers import their completed design file, and Zeplin will automatically provide developers with the project element’s dimensions, colors, and behaviors. It also includes a component that allows designers to create a universal style guide for developers so they won’t have to constantly search for guidelines on how to treat text, buttons, and so on. 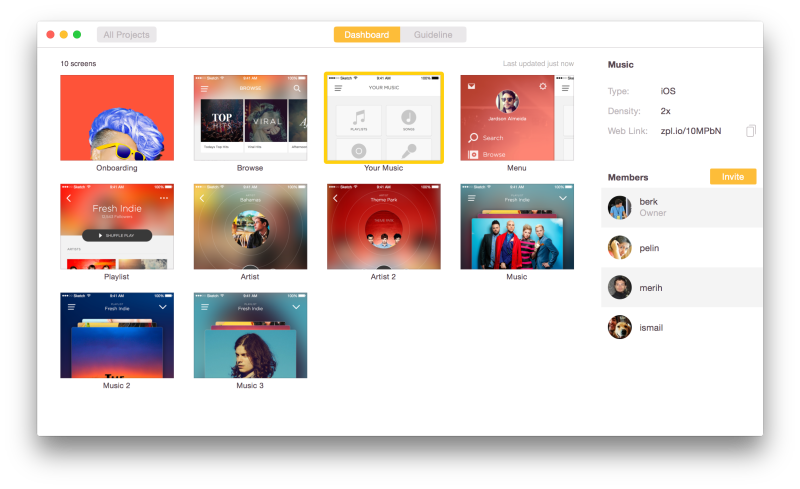 The service opened up in beta last September and has more than 30,000 individual users, including teams from Slack, Pinterest, Shopify, and Feedly. It was founded by Pelin Kenez, Berk Cebi, Merih Akar, and Ismail Ceylan, a group who previously worked together in an agency in Istanbul, Turkey.

Zeplin wants to fix the collaboration problem between designers and developers, so the optimal place to use this product is in the production phase. Kenez says that the service won’t be ideal if you’re prototyping, but is rather intended for when your designs are complete and you want to build out the app.

Designers looking to use Zeplin will find that, for now, it only works with Sketch, the professional digital design app for Macs. Kenez and Cebi told VentureBeat that while the team is looking at other integrations in the future, Sketch is “more hip and what more designers are using now.” Adobe Photoshop support could be coming soon, however; Kenez says that Adobe has reached out to her company about when that support will happen. Interestingly, Adobe has a similar service called Extract, though Cebi said that it’s not collaborative like Zeplin — could Adobe eventually eye an acquisition? 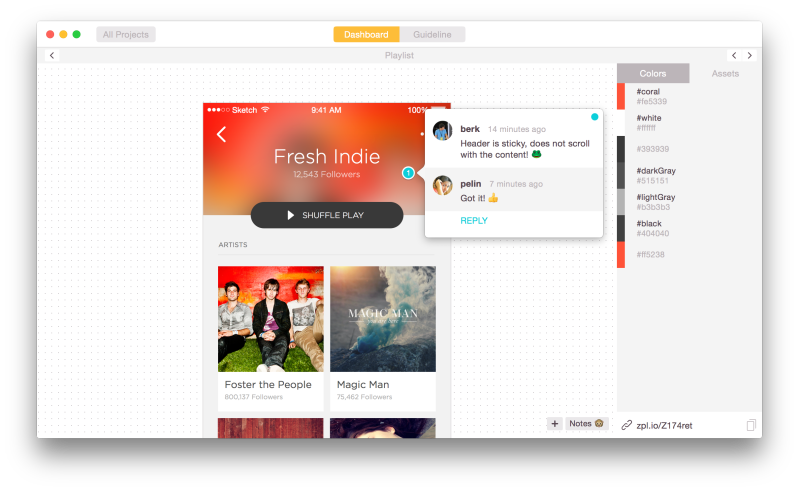 Above: Designers and developers can add notes to their projects to speed up project timelines.

Other integrations Zeplin is considering include support for file-storage services like Dropbox. Additionally, Kenez said that due to demand, team communication app Slack will be added to the service in a few weeks. The company is also exploring other use cases, including how quality assurance testers could benefit from Zeplin.

Zeplin’s foray into designer-developer collaboration isn’t revolutionary. It’s going head-to-head against the likes of Avocode and Invision, both of which count major brands as customers. What’s more, Invision just landed $45 million in funding earlier this month, giving it a huge financial advantage over Zeplin. But Zeplin remains undeterred. It is taking the same route as Slack by going after startups and small agencies, all of which have teams using the latest (but perhaps not mainstream) tools on the market and which are willing to provide Zeplin much-needed feedback.

Zeplin’s desktop app is available for Mac users only, as Sketch is a Mac-only application. Non-Mac users can still use Zeplin, but only via the Web. Users can import website, iOS, and Android app projects into the service.

The company also recently released a payment plan for its users. Under a monthly subscription model, teams will be charged based on the number of projects they have (the first one is free). All plans include unlimited team members.

“In Zeplin, we’re pushing designers and developers to be together throughout the entire process,” said Cebi.