Apple sought to reassure analysts and shareholders that the company was still one to bet on following the release of its Q3 FY2015 earnings. Following the market’s close, Apple’s stock dropped nearly 7 percent in after-hours trading. Some have raised concerns about the company’s performance in China and this was only reinforced by looking at the company’s quarterly report, which showed a 21 percent decrease sequentially in revenue from the Greater China market.

Many of Wall Street’s fears are a result of China’s stock market crash on July 9, which is considered to be the worst since the global financial crisis. So when China showed up on Apple’s earnings as having the second biggest revenue drop for the quarter (the rest of Asia Pacific was first with a decrease of 30 percent sequentially), investors got spooked.

During a conference call with analysts, Apple CEO Tim Cook addressed this topic by saying that his company remained “extremely bullish” on China, and passed off any fears about the country’s sluggish market. Apple will “continue to invest” in China, he said. The company will continue to put the “pedal to the metal” in making investments in the country.

While the equity markets in China has become volatile recently, which Cook says could create some speed bumps in the near term, over the long haul, the country is going to be an even bigger player in Apple’s business. In fact, if you look at this quarter’s earnings, revenue from China is down 21 percent quarterly, but up an amazing 112 percent annually. 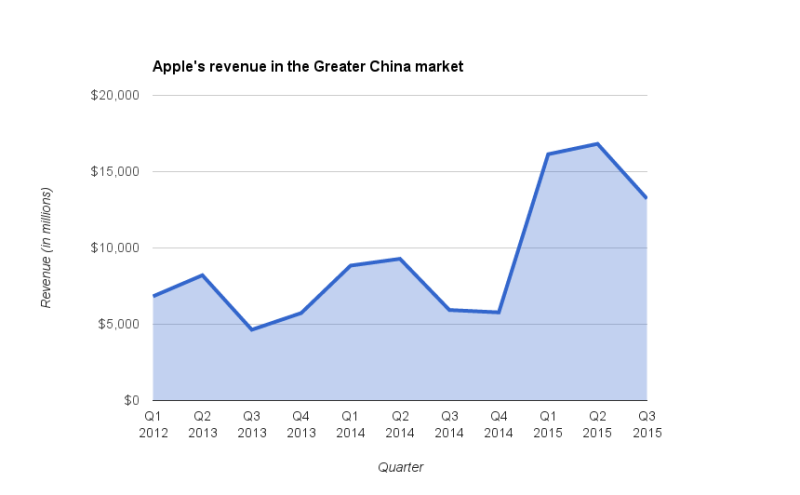 Above: Apple revenue from the Greater China market by quarter 2013-2015.

In fact, if you look at revenue that the company has generated from China, the trend is interesting — from Q1 FY2012 until Q4 FY2014, it remained below $10 billion. But for the past three quarters, it has jumped up to between $13 billion and $16 billion. China has been one of the main drivers of growth for Apple over the past couple of quarters. The country is, after all, the second biggest market after the U.S., and Cook attributes much of that business to growth in the rising middle class:

The rise of the middle class [in China] is continuing and it is transforming China. I saw a recent study from McKenzie that’s projecting the upper middle class to grow from 14 percent to 54 percent of households over the ten year period from 2012 to 2022. So we’re within that period at this moment.

Prior to Apple’s earnings report, at least two analysts had made comments about the company’s involvement in China. Brian White of Cantor Fitzgerald said that “despite the sharp sell off in Chinese equities, the company is ‘still in the midst of a transformational, super cycle.'” Steven Milunovich of UBS had also remarked that a slowing Chinese economy is a risk for Apple. However, the firm’s economist Tao Wang shrugged off that assertion, saying that there’s a “limited impact” on the economy and that there’s “little evidence of stock market gains substantially affecting household consumption.”

Multiple times during the earnings call, Cook reaffirmed his company’s commitment to investing in China, saying that the market opportunity in the country held a lot of promise, and specifically that LTE penetration in China is around 12 percent and hasn’t reached the same level of fiber in other countries. These things, among others, present an “incredible smartphone future there.” Simply put, Cook said: “I think China is a fantastic geography with an incredible, unprecedented level of opportunity there and we’re going to be there.”

While Apple is down in the stock market right now, it’s probably best to believe that the company isn’t that concerned — it’s not worrying about 90-day cycles, but rather the long-term. Which is why this is not a big thing.