If you want go deeper into Sid Meier’s Civilization: Beyond Earth, Andrew Frederiksen has just the thing for you. The lead game producer at Firaxis Games showed us a preview of the Rising Tide expansion of 2K’s Beyond Earth computer game at a recent preview event at its studio in Novato, Calif. The new content is coming this fall, and it is aimed at keeping players addicted to the sci-fi planet colonization game for many hours.

We talked to Frederiksen about the deeper diplomacy system, where you can get a better sense of your relationships with other faction leaders by knowing what they like and what they fear. And we also talked about the effort the team put behind making floating cities on the seas — the biggest feature addition in the expansion. The Rising Tide expansion is coming to Windows PCs this fall for $30. But here’s the latest details on how the game downloadable content (DLC) plays and its latest features. 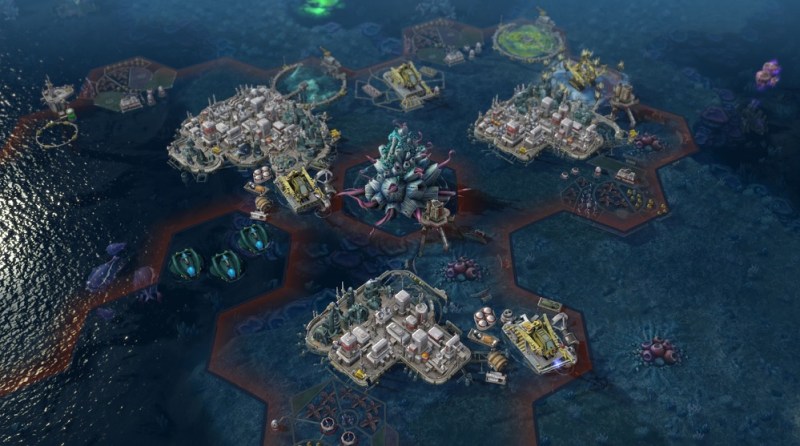 Above: Rising Tide expansion of Sid Meier’s Civilization: Beyond Earth has plenty of water.

GamesBeat: Tell us the thinking behind Rising Tide. What did you want to achieve with this?

Frederiksen: One of the big things is just pushing the envelope more, taking it to places we couldn’t. You can’t take a historical Civ to some of these places. It’s opening things up more and giving access to new systems and expanding what’s already there. You look at water gameplay. That’s something Gandhi never had — floating cities in the Indian ocean. Queen Elizabeth had ships but not cities. That’s something you can do in all these new ways.

The affinity system, adding the hybrids and the new gameplay that comes out of having those hybrid affinities and how we’ve rebalanced that stuff. That’s new. And the diplomacy system is something we’ve looked at where we should have done more. It’s big. You saw it. This diplomacy chain is different from turn one.

GamesBeat: It seems like you get more choices in diplomacy for a start.

Frederiksen: It’s not just more choices. You certainly do have a wider variety of things to pick and choose, but it’s also this transparency you have into understanding other leaders — the fear and respect and how that contributes to their behavior, their options, who you can be friends with. With that transparency, you now have more ability to try to guide the diplomatic landscape. I know that guy cares about this thing, so I’ll do that thing, so he’ll like me more, so we’ll be friends, so I can get more capital. Then we can go to war together. Before, you would open diplomacy and say, “Wanna go to war?” They’d say no, and that was the end of it. You didn’t know why or what to do to change that. 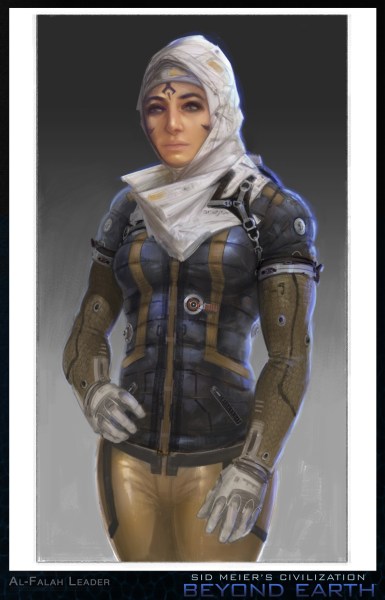 Above: ArshiaKishk leads the Al Falah faction in Civilization: Beyond Earth – Rising Tide

Frederiksen: It’s transparent in that you can have an understanding of where things are and why they got there. You can infer where they’re heading. But you don’t have a “turns until they declare war” meter. You have those communiqués at the top where they say things like, “Hey, I notice your cities are starving. Why don’t you feed your people?” And you think, “Okay, this person cares about food. I should increase my food rate so they respect me more, and we’ll have a better diplomatic relationship.” You can look at the comments you get from them, look at their traits, and see what they care about. Then you infer what actions will help or hurt your relationship.

GamesBeat: Could you also just trade food with them?

Frederiksen: The trading now is out of diplomacy directly. Trading is strictly in trade units, trade vessels, and trade convoys. You can send those. Those will yield not just food and gold and energy. They can also trade strategic resources, like firaxite and xenomass. If a city has those you can trade them. If someone says, “Your cities are starving. You need to give them more food,” I can say, “Hey, you’re good at food. Let’s make an agreement that my capital generates more food. Now you like me because we have an agreement together and because I’ve got more food, plus my city’s growing better.” It’s what we hope diplomacy creates in the real world, where everyone’s helping each other out.

GamesBeat: Is there some real-world science behind the floating cities? Is that possible?

Frederiksen: I’d like to think so. There’s plenty of research out there. Our designers are as much into real science as science fiction. Not everything is one to one, but there are lots of concepts, lots of ideas that get their juices flowing. One of the new wonders for water cities has to do with taking a mysterious alien organism and harnessing that to help our citizens be healthier. But when you read the fiction about it — it’s kind of like that Star Trek science, where someone takes something kind of real and works it into a new paradigm. “If we make a couple of logical conclusions beyond this, it could happen.”

GamesBeat: Your borders, basically, are almost meaningless now. You can move your cities, so borders restrict you less?

Frederiksen: If you own territory, it’s just as much your territory on water as it is on land. If someone doesn’t have open borders with you, they can’t enter without going to war. You do gain it differently and manage it a bit differently. If you claim too much of it, you may not be able to work all of it. You may be out of range. If your empire is so wide, but you have only one city, can you crank out enough units to defend all your borders? It’s a tradeoff.

GamesBeat: Are there things you’ve fixed, so to speak, compared to the original?

Frederiksen: We have a lot of things we took feedback on and balanced as we were going and introducing things. The victory conditions for the affinities, where those lie and how much affinity you need to gain them and how quickly the AI will pursue them, we’ve done a lot of balance with that. That’s as much a factor of the feedback we got from the base game as it was introducing hybrid affinities, where we need to work out how much you gain from different affinities and where that fits in. I don’t know that I would call it a “fix,” but it’s a lot of balance in response to the feedback.

Even when we’re working on something that people didn’t specifically talk about — people talked about the diplomacy system. Until you guys get your hands on it and start talking about it in detail, nobody really knows what it is, but we’ve heard what people want to do and how they want to be able to understand things. While we’re designing we try to fit that in.

GamesBeat: What can you tell us about the new characters, the North Sea Alliance?