Mobile gamers have used Kamcord and Kamcord-capable apps to record 50 million videos, and now the company is building on this by pushing into live broadcasting.

Today, Kamcord is launching a feature that will enable people to use its app to livestream mobile games. This is a first for the company, which as focused up until this point only on recorded content. The livestreaming feature works on iOS, Android, and on PC — where you can hook up your phone or tablet to your computer and livestream using software like OBS or XSplit if you want. With more than 100 million people watching live video content on sites like Twitch and millions more making clips for YouTube, Kamcord is trying to capture a piece of that market while focusing on mobile, which is something its competitors have mostly ignored.

“The big appeal for us with live is it really let creators and fans interact in a really meaningful way,” Kamcord cofounder Aditya Rathnam told GamesBeat. “It also allows us to build the ultimate gaming destination.”

To kick off its mobile livestreaming in a big way, Kamcord has brought on more than 20 of the top mobile-gaming video creators from YouTube and Twitch. And some people are already live right now playing games like Hearthstone: Heroes of Warcraft. 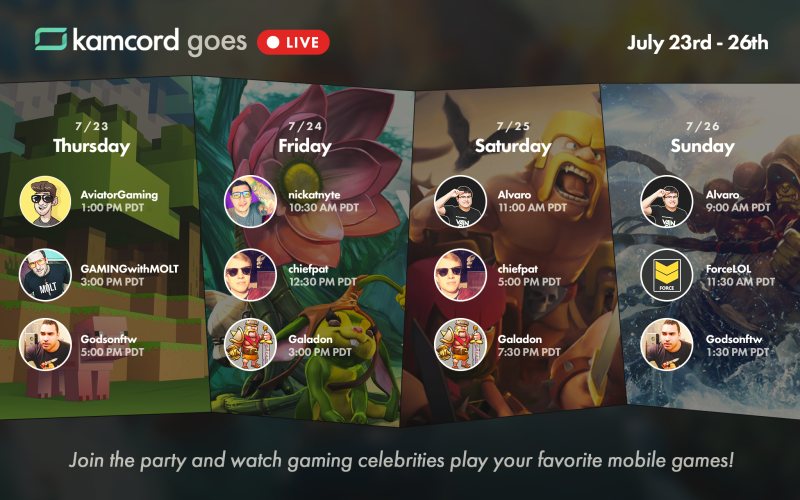 Above: An upcoming schedule of Kamcord broadcasters.

This is a huge opportunity for Kamcord to establish itself as the go-to destination for the millions (if not billions) of people who consider themselves mobile gamers first.

“Other top creators and I have wanted a dedicated mobile gaming community for a long time,” YouTube Clash of Clan celebrity Chief Pat said in a statement provided to GamesBeat. “Keeping fans happy is our number one priority and there’s no doubt that fans are going to have a blast interacting in real-time on Kamcord streams. There’s just so many more ways to form a stronger connection when the conversation goes both ways.”

And ensuring the conversation is fun and responsive was a huge goal for Kamcord. The company added chat features a few months ago, and so that was already in place for livestreaming. But the startup also wanted to provide low latency of around 10 seconds so that broadcasters could quickly respond to chatters. Other services, like Twitch, have a lag time of around 20 to 30 seconds.

But perhaps more impressive than the lag time was the time it took Kamcord to get livestreaming up and running. The company started working on this feature in full only about six weeks ago, and it is already delivering a consumer-ready product. Of course, it always knew this was something Kamcord knew it wanted to do.

“Livestreaming is something that has been on our radar for a long time,” said Rathnam. “We’ve been thinking about it for a couple of years. Having thought about it like that for a long time — and having built much of the infrastructure around it — helped us get it out so quickly once we decided to do it.”

Now, it’s up to the community to deliver the content. And Kamcord, with its partners, is trying to get that off to a booming start. But Rathnam knows that his site won’t really take off until it starts producing its own stars.

“We are getting a lot of materials in place to make it really easy to make new people go live on Kamcord,” he said. “That’s going to be very important. The partners obviously are our anchor, but we also want to create Kamcord that can generate grassroots celebrities.”