Tech product community board Product Hunt has added a new category to its popular service, called Books. Available in an open Beta, the service allows users to share reading material they enjoy — everything from the best new non-fiction to the latest literary releases, to anything else curated by the community.

Product Hunt Books is the second category the service has added, following the release of Games in June. To mark the product’s launch, several highly regarded authors will be hosting Ask Me Anything (AMA) events from now until September. Speakers include Ashlee Vance (“Elon Musk“), Brad Feld (“Startup Communities“), Seth Godin (“What To Do When It’s Your Turn“), and Kevin Roose (“Young Money“), among others. 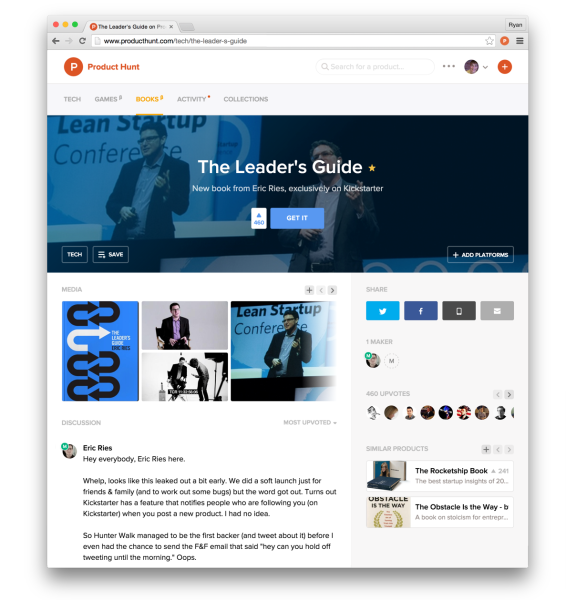 Above: Product Hunt Books listing of "The Leader's Guide"

Already, the company has organized collections from Mark Cuban, as well as those by venture capitalists Keith Rabois and Marc Andreessen, who have curated books that can help entrepreneurs.

In a blog post, Product Hunt’s Erik Torenberg said that adding books was the next logical step. He explained that the Product Hunt community loves to read, citing the popularity of venture capitalist Peter Thiel’s book “Zero To One,” which received more than 500 upvotes , and of the Bookstck collection,  which has nearly 1,000.

Additionally, the company feels that curating serves an important function, as there are more than 100,000 books published each year. Torenberg said people often ask him to recommend interesting books, and now the entire Product Hunt community can chime in.

Lastly, Product Hunt wants to tap into a growing trend among authors, who are increasingly bucking the tradition of waiting until publication to share their latest book. The company feels its Books category will be favorable to those who are keen to release ideas first as blog posts or Tweets, and who may even upload entire chapters in order to start a conversation.

What Product Hunt has done is reimagine the book club people traditionally host in their living rooms. Now, the “club” is much larger, and fast-moving, and there’s a likelihood of having the author interact with you directly to answer your questions. One other fun thing that the company is doing to celebrate the launch is hosting a “readathon” this weekend (July 25-26), featuring in-person book clubs and including hundreds of people in more than a dozen cities around the world. The book that will be read is Ashlee Vance’s biography of Elon Musk.

If you’re new to Product Hunt, it’s like Reddit or Digg, but specifically for “products” (read this article for more details). This term has been loosely used to address almost anything recently launched by a company, such as apps, hardware, games, and now (obviously) books. Founder Ryan Hoover is said to have raised $6.1 million in venture capital under the premise that he needs to look for early adopters in a myriad of industries, not just in tech. This includes fashion, music, gaming, and now books.

You can check out what’s on Product Hunt Books right now.