China-based smartphone maker Xiaomi has announced a partnership with Uber that will see the alternative taxi company take on a dual role of ecommerce company and on-demand delivery.

The tie-up is timed to coincide with the launch of Xiaomi’s latest flagship device: the Mi Note, a 5.7-inch “phablet.” In Singapore and Kuala Lumpur, Uber users will be able to order the Mi Note in a “flash sale” directly through the Uber app on July 27.

This move essentially gives Uber exclusivity for the Mi Note for 24 hours before it goes on general sale through Xiaomi’s own Mi.com website.

To purchase a phone, users in the aforementioned markets open the Uber app, select “Xiaomi” using the little on-screen slider, and place the order.

The entire payment is processed in the Uber app, with the fee charged to whatever card is linked to the Uber account. The Mi Note will then be delivered in however long it takes for the driver to arrive — we’re talking minutes here. 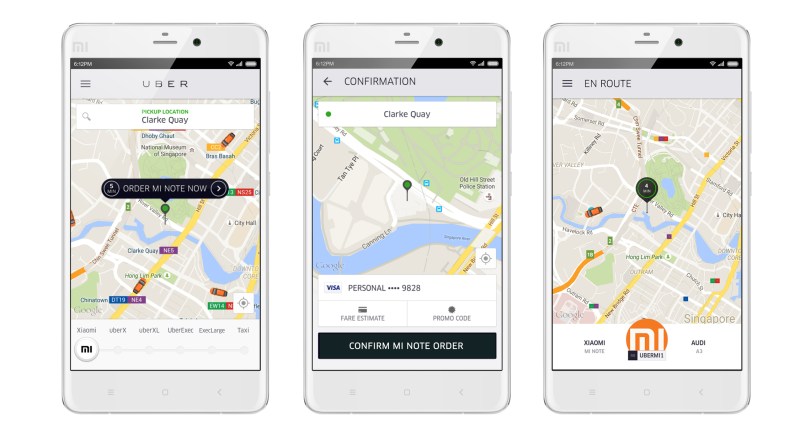 Since the launch of its first smartphone way back in 2011, Xiaomi has emerged as one of the world’s largest smartphone manufacturers, though it has largely operated within the Asian market so far.

Back in May, this all changed when Xiaomi announced its official entry into the U.S. and Europe with the news that its online store would be launching imminently.

Uber has been blazing a trail around the world, disrupting industries and generally causing widespread mayhem. It has increasingly been turning its attention away from transporting people into transporting goods, too.

The company has let users order ice cream through the app for a number of years, though on a limited basis. It proves the company is as much about a network of drivers and vehicles as it is a simple technology-enabled taxi company.

Last week, Uber revealed a tie-up with Chelsea soccer club, one that let users request a replica Chelsea shirt delivered to their door — though this was little more than a glorified PR initiative, as the shirts were a giveaway.

There is, of course, an element of that with this latest initiative in Asia. But letting users actually buy a flagship phone through the Uber app — before it goes on sale anywhere else — is a major show of marketing might by Uber. And it also helps demonstrate Uber’s credentials as an ecommerce platform.