Funk of Titans feels like a cheap, free-to-play mobile game that costs $6.99 on Steam. Developed by indie studio A Crowd of Monsters, this blended concoction has missed what makes a runner platformer so fun in the first place and, instead, botches its interesting premise.

First released on Xbox One in January, Wii U in May, and now on PC, the game plays similarly to Temple Run, and other endless runners, but this time you assume the role of Perseus. The story is quickly introduced in just a few short text blurbs. Zeus, who is only a fan of funk, orders his son (Perseus) to take down the titans of pop, rap, and rock. The reason why Zeus wants to get rid of all the other musical genres besides funk is never explored, but the three titans act evil enough to justify Zeus’ and Perseus’ violent actions. This musical twist on Greek mythology sounds original and quite clever on paper, but the execution is painfully poor. Funk of Titans is shallow, short, and boring.

For all of the graphical issues the game has (it doesn’t look that great), the actual art design itself is decent. The characters look eccentric, especially Perseus, and the game is colorful. Some levels that are set during dusk sport stunning lighting effects as well. Seeing this interpretation of Greek mythology makes for quite a visual treat — so much so that I actually think Funk of Titans could work as a children’s show. Plus, you can purchase various items, such as headgear and weapons, that add visual humor into the mix. For example, Perseus can equip a stormtrooper helmet and a lightsaber. 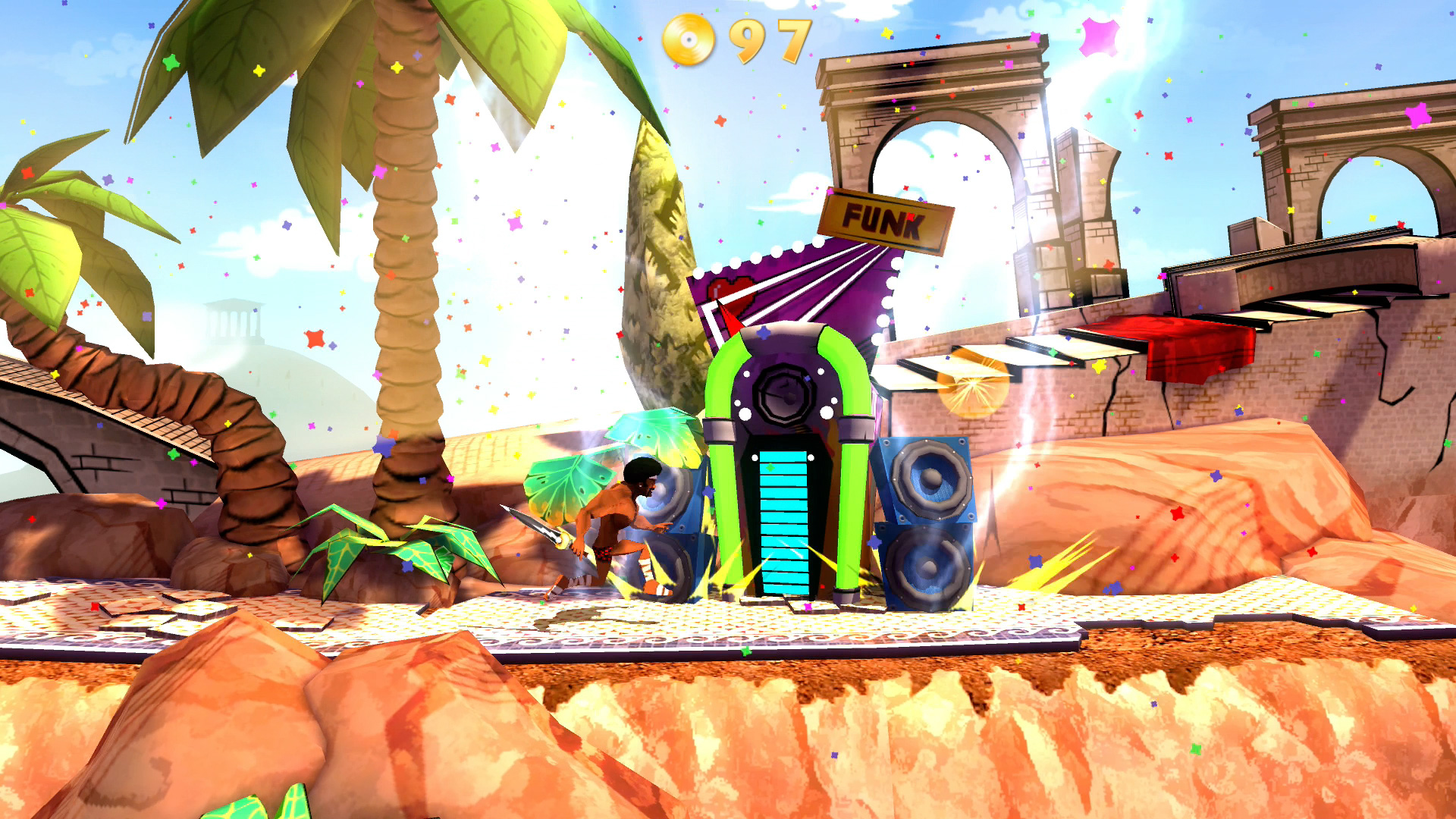 Above: Look at the color!

Unfortunately, playing the game almost put me to sleep. Since it is an endless runner in the same vein as Temple Run, your actual input is minimal as you can only perform two actions: jump and hit objects/enemies. Perseus runs by himself. But, you need to worry about avoiding the same three types of enemies by jumping on them or slashing them. And you have to dodge obstacles like spikes or fire, too.

That’s the entire game over the course of three hours, and only the last couple of levels contain a bit of a challenge with some interesting vertical gameplay. You can collect gold vinyls, which you’ll use to purchase stuff like the aforementioned lightsaber, but these items are only useful as fun visual cosmetics. You can complete the game without purchasing a single thing, and you might not even notice this feature.

The game has a little more than 40 levels, but each can be completed within five or fewer minutes. And you’ll encounter several awful boss battles. The showdowns with the titans are simple quick-time events. You have to press all four directional keys quickly during three rounds of dance-offs that contain some of the most awful sound design I’ve had the displeasure of experiencing. This is a game based on music for crying out loud! A handful of minigames are also available, which consist of Perseus riding on a rocket-powered Pegasus toy while collecting gold vinyls, but these are a drag to play as well. 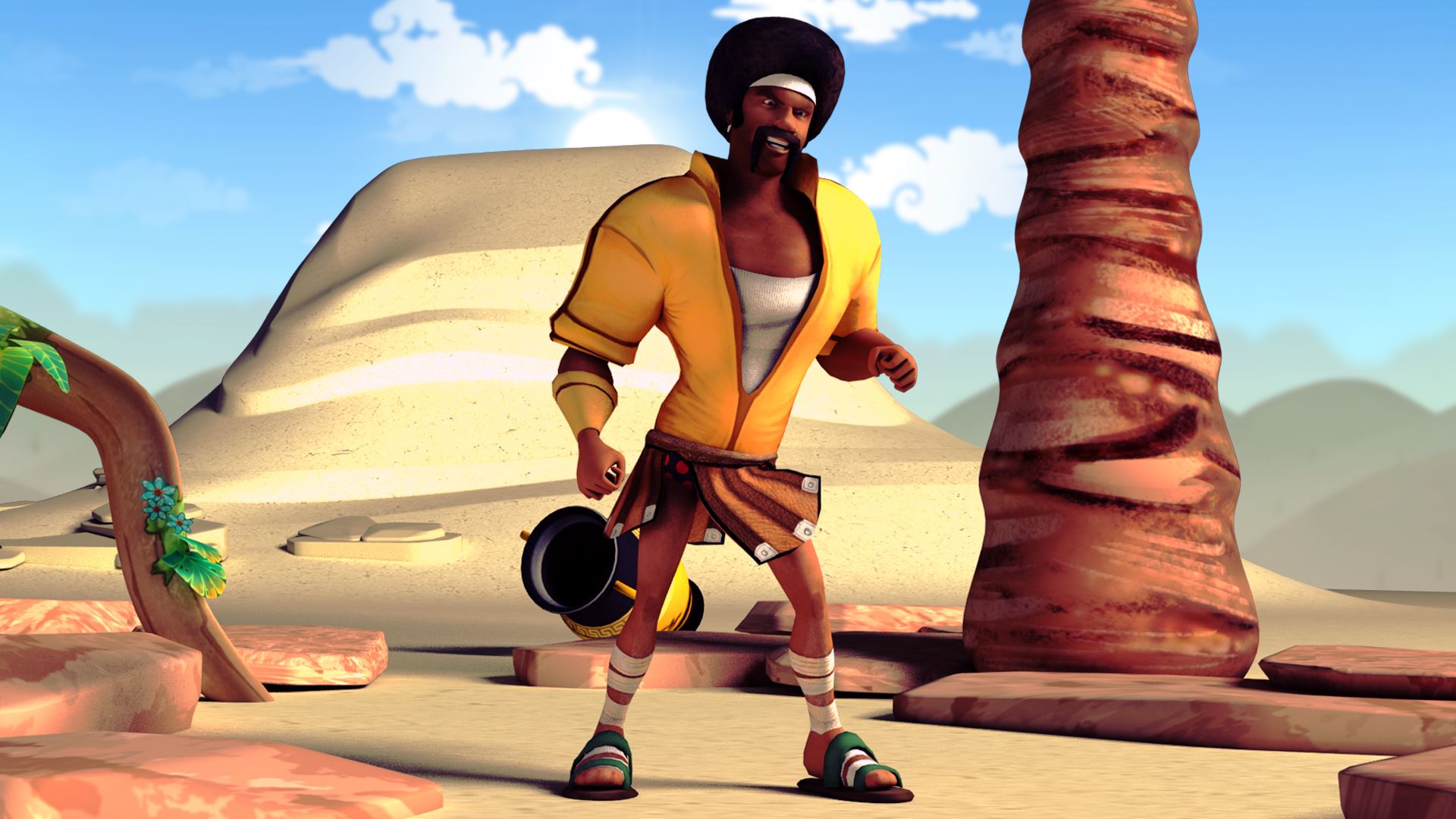 Funk of Titans costs $6.99, which is quite egregious considering the content that’s on offer. Most of the game’s issues could be ignored if it was a free-to-play mobile experience or if it even just cost a single dollar. The title simply can’t justify its price, and this highlights its flaws dramatically. Spend your money elsewhere.

I spent nearly three hours playing Funk of Titans, and I can’t remember the last time I had such a humdrum experience. Combining Greek mythology and music seems like a brilliant idea with gargantuan amounts of potential, and developer A Crowd of Monsters should be commended for thinking of something this original at least. Unfortunately, the game is a complete waste.

It’s a chore to play. It’s poorly written — with humor that’s crass rather than funny. And it has a gaudy introductory asking price. Funk of Titans is definitely far from groovy.

Funk of Titans is out now on Steam. Merge Games provided GamesBeat with a Steam code of the game for the purposes of this review.