Crowdfunding isn’t dead. But it’s also probably not for you.

Kickstarter is back on the rise when it comes to funding games, according to a report from data firm RJMetrics. And the crowdfunding site, which enables anyone to ask for contributions from the public to help ideas get made, owes its resurgence in this space to what made it such a big deal in the first place: big-name developers. After a number of massive campaigns raised nearly $25 million in Q3 of 2012, Kickstarter had seen a steady decline in the money contributed to game ideas.

Until the last three quarters, that is.

As big-name developers return to Kickstarter in recent months, we can see why the site is bringing in more money. Projects like the Banjo-Kazooie followup Yooka-Laylee, the Castlevania: Symphony of the Night followup Bloodstained: Ritual of the Night, and much-desired sequel Shenmue 3 have all debuted this year — and all are among the most funded projects in this category.

But this is not a sign that Kickstarter is turning into a viable source for funding for most developers. And you don’t need to dig deep into the numbers to see that is the case. Since 2011, the site has had more than 7,100 gaming projects. Those have raised nearly $160 million from backers. That might seem like a lot, but here’s how you make that number look really small: publisher Electronic Arts spent $200 million making Star Wars: The Old Republic. Which is only one game.

What that $160 million breaks down to is about $22,500 per campaign — although we all know that not every project meets its Kickstarter goal. Instead, most fail. And most of that money goes to a few megahits. 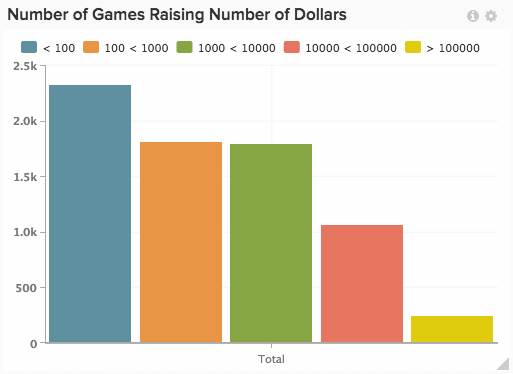 Above: Most of the money goes to just a few projects.

So Kickstarter isn’t going anywhere. But it is definitely a platform for known creators to capitalize on their fans who want to see more of the same.

After crowdfunding games stormed onto the scene back in 2012 when developer Double Fine raised more than $3 million to make an adventure game, many saw the service as a way for interesting ideas from small studios to get made. And while some games, like Chivalry: Medieval Warfare, FTL, and Choice Chamber have managed to successfully raise money through crowdfunding. Kickstarter doesn’t seem like it will ever replace traditional funding or even really come close to matching it.