Flaviar has been catering to the world’s liquor-lovin’ masses for more than three years, with a subscription sampling service that delivers an assortment of hand-picked spirits to your door every month. While Flaviar has been a Web-only affair since its inception, today sees the official launch of its first mobile app, following an extended beta period.

Founded out of London in 2012, Flaviar has raised around $500,000 in funding since its launch. In response to a growing demand for Flaviar in the U.S., the startup joined Y Combinator in the summer of 2014 and moved its headquarters out to San Francisco.

The company still has an official subsidiary in London, though its team of 22 is split between offices in San Francisco and Slovenia. 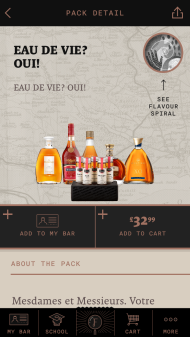 Above: Flaviar for iOS

Available on iOS only for now, the Flaviar app is all about discovering new tipples, including scotch, whiskey, bourbon, rum, gin, cognac, vodka, and more. You can search tasting notes from more than 10,000 different brands and blends, read reviews, build your own “virtual bar,” and even order tasting packs and full-size individual bottles — this service available in the U.S. and European Union.

The company is setting out to become the “go-to source for fine spirits,” so even those who don’t wish to buy through the app can still read articles about spirits, along with other “educational” content which includes how-to guides for spirits-tasting.

While the new app is a natural extension of the existing Web-based offering, insofar as you can manage your tasting pack subscriptions and read reviews in-app, it also brings an extra dimension to the service. 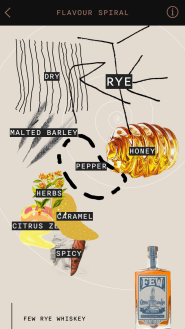 For example, the mobile app offers what it calls a “flavour spiral,” designed to help you visualize the taste of specific liquors. Indeed, the company commissioned an artist to draw 252 individual components for the flavour spiral.

“We all hate that feeling of insecurity when looking at shelves full of bottles, trying to decide what to get,” explains Flaviar co-founder Grisa Soba. “Prices, labels and bottle shapes can’t tell me if I’m going to like the drink or not. That’s why we made the Flaviar App – to give people the best insights possible on what to expect.”

In a nutshell, Flavor is setting out to “be your IMDb for liquor,” as Soba puts it.

Though you can buy full bottles through the app, Flaviar’s subscription-based element tackles a genuine problem — with so much choice out there, consumers like guidance on what the best “things” are. Birchbox has been doing that with beauty products for a while already, and you could argue that the core raison d’être of Apple’s new Beats 1 radio station is the same — it’s all about sifting through the gargantuan arsenal of new music out there to deliver a hand-picked “best of the best” compendium.

Flaviar’s launch comes two weeks after Distiller, a whiskey-centric recommendation engine, introduced a similar new e-commerce service that lets you purchase bottles directly through its app, though it’s only available in the U.S.