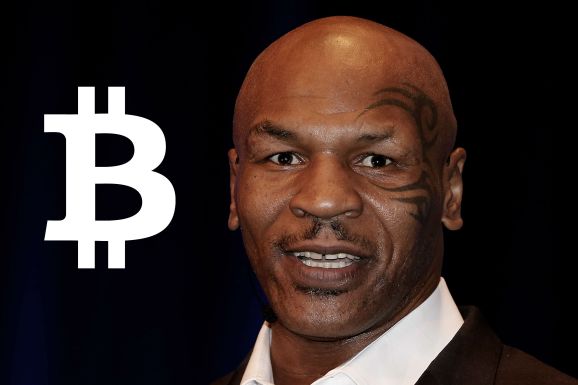 Mike Tyson is either getting into the Bitcoin game or is getting scammed out of a bunch of money.

Tyson, a former heavyweight boxing world champion, tweeted a link this weekend to a website with the best URL you’ll see all year:

Coming soon… http://t.co/Blf592VtUW… Changing the way we get change.

The man who once squandered $400 million wants to change the way we get change.

It almost makes sense: nobody wants to tell Mike Tyson he can’t do something. A stint on Dancing With the Stars? A documentary about your passion for pigeons? A feature on Madonna’s new album? Now Bitcoin?

The Mike Tyson Bitcoin ATM website gets straight to it: this machine will turn your cash to Bitcoin in 20 seconds. Mike Tyson’s shortest fight ever was 30 seconds. Coming to Las Vegas in August.

A spokesperson gave CNBC this comment from Tyson that he definitely did not write:

“I’m very proud to be a part of the Bitcoin revolution. Digital currency is the future and the more I learn about it the more intrigued I become. Digital currency is going to level the playing ground for those that want alternatives for financial freedom. No one knows better than I how uncertain the economy can be and at this juncture in my life it is imperative that I am proactive about my financial planning and for me it includes Bitcoin.”

But this wouldn’t be a Mike Tyson story without some kind of bizarre hiccup.

Silicon Angle points out that this whole thing could easily be a scam: Mike Tyson Bitcoin’s URL is registered to a Peter Klamka, who owns Bitcoin Brands Inc and Bitcoin Direct LLC.

Bitcoin Brands Inc is an OTC stock with a market cap of less than $7,000. Unlike the NYSE or NASDQ, these are unlisted stocks, so details are scant.

Nevada state records show that Bitcoin Direct LLC filed opening paperwork just four months ago. A press release soon followed in which the company describes itself as providing “bitcoin transaction solutions.” That same release notes that the company is financed by the Conex Cattle Corporation, a beef provider that purchased a majority stake in Bitcoin Direct just after it opened.

Googling Klamka’s name yields equally shady results: the first is a bizarre website with equally bizarre comments that appear to be written by someone very defensive of Peter Klamka. The second result is a court brief stemming from his failure to pay child support.

In all likelihood, a huckster has convinced Tyson, a professional head trauma survivor, that Bitcoin will be his Foreman Grill. Or maybe Tyson actually is passionate about “proactive financial planning.”