SpellUp is a game that I really wanted to like, but it ended up having too many quirks for my liking. And they aren’t the kind where this iOS game spells your score out in fireworks or gives you bonus points for using words like “bromance.” To the best of my knowledge, it does neither of those things, and either one of them would make me enjoy it more.

It’s fun enough and good for a quick fix of competitive wordplay, but it will quickly grind down your patience and willingness to play it long-term. 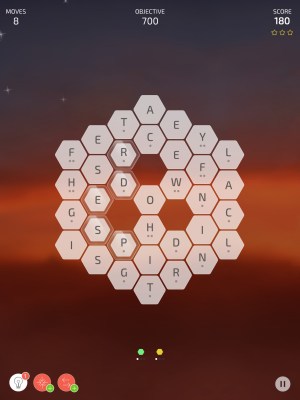 Above: No matter what other requirements you have in a level, you must always clear those “glazed” tiles by using them in a few words.

It offers a fair amount of strategy

Here’s how SpellUp works: You get a board full of letters and a goal. Usually, you need to make a certain number of points in a determined set of moves, but the game will throw some obstacles at you like asking you to unlock and use some power-ups or making you remove specific tiles.

But it’s typically all about the score, and you have a lot of freedom about how to go about maximizing your total. If you spell three four-letter words, you’ll unlock a green tile that doubles the score of any word that includes it. If you spell three words of five or more letters long, you’ll get a golden tile for a triple word score.

Using both a green and a gold tile in a word gets you a rainbow tile which gets you a huge score and also removes all of the rows containing the specific spaces you used. So if you’re really trying to do well, you have to keep an eye on where letters are, how you can use them, how many moves you have left, and decide whether to use a green tile now or try to go for a more advanced move.

It’ll definitely keep you thinking, and that’s where SpellUp is at its best. 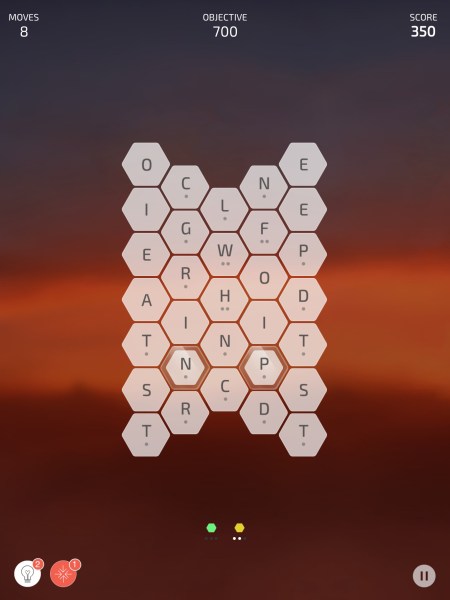 Above: SpellUp's boards come in all shapes. As long as you can make that shape with hexagons, anyway. 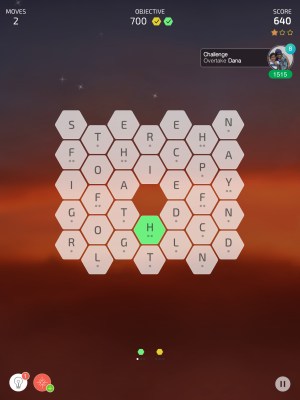 Above: The green power-up is your steadfast friend. The gold power-up is fickle and mean.

It won’t just let you think for 10 goddamned seconds

Word games are usually pretty helpful when you take a little while to make a move. They might highlight a word for you or offer a hint to help you move on.

SpellUp does the “here’s a word” thing, but it doesn’t take long to decide you’re stumped. I timed it, and it waits exactly 10 seconds before it gives up on you. And it doesn’t even suggest a great word, either. I’ve found better words after this happened, but it was hard to do so with SpellUp constantly throwing some glimmer on a bunch of crappy tiles I knew I could beat.

You can turn this option off, but sometimes, I want the help. It would be better to set the length of time before the hint appears or, better yet, give you a hint button for when you decide you’re stuck. SpellUp does include a word-finding booster that will help you out in exchange for some in-game currency, but the choice between annoying, free help and useful in-app purchase bait is not much of a choice at all.

The special-tile counters are not your friends

As much as I like the strategy SpellUp requires, the combo tiles have some weird rules.

So you have this weird combination of the greens having the specificity of only working on one word length but letting you be inconsistent (it won’t even start over if you use a three-letter word) and the golden tiles requiring some pretty steady results and punishing you for a single slip-up. This lends a bit to the planning aspect, but it also means that you’re far more subject to blind luck than you should be in a skill-based title.

Horrible and unskippable game modes will stop you dead 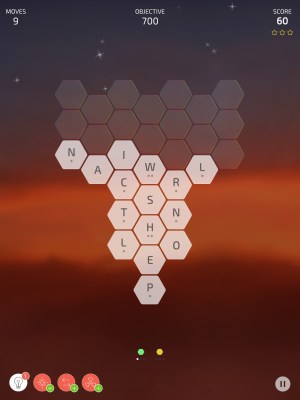 Above: Seriously: Eff this mode.

I’m all about games giving you some variety; I really am. But I’m less a fan of those times where you end up stuck in a mode that you hate and have to slog through it in hopes of finding something better on the other side.

For me, SpellUp’s timed mode was this moment. You start out with a few letters, and then more fall from the top of the screen. You still have to hit a certain score in a specific number of moves, but you’re also trying to do so before the board completely fills up.

And while some pressure-loving players might appreciate the risk-reward of letting the board fill up and holding out for a bigger word, it mostly just stressed me out. And my only options at this point were to power through a bunch of levels I hated or go back to the ones I’d already played. I suppose I had another option: Stop playing completely. And it was definitely tempting.

For the two or three things that SpellUp does right, it has too much frustration and confusion to deserve a permanent spot on your iPhone or iPad. It asks you to do some pretty good complex thinking, which is nice, but it also sticks you with modes you may not like and forces you to get through them. It’s worth a play or two to see if you like it, but it probably won’t stick with you.

SpellUp is out now for iOS. The developer provided GamesBeat with a download code for this review.