Sequentially, this is an increase of 8 million MAUs (4.63 percent) from the previous quarter, which had 308 million MAUs. However, it’s a 15 percent increase year-over-year. Some analysts estimated that the company would grow between two and eight million net users compared to the 14 million last quarter — 310 million MAUs had been floated around.

Most of the growth in the second quarter came from outside the U.S., with 250 million.

The company says SMS Fast Followers, which is a command users can send via text to quickly follow others, contributed the vast majority of MAUs it added on a sequential basis. Mobile MAUs represented approximately 80 percent of all the MAUs. 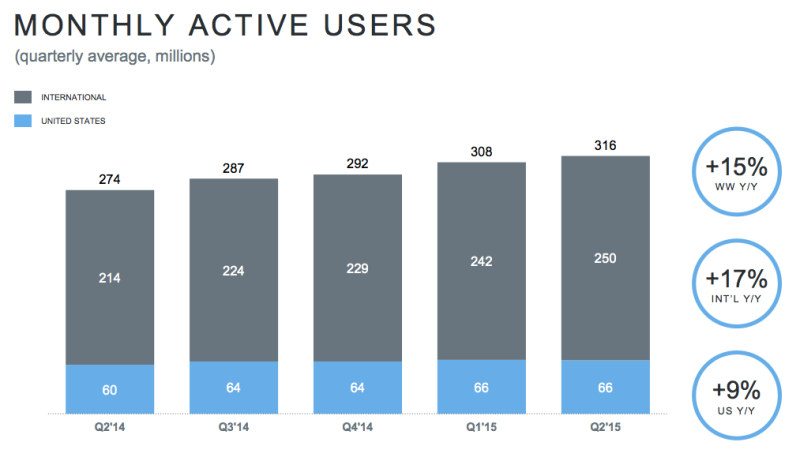 “Our Q2 results show good progress in monetization, but we are not satisfied with our growth in audience,” said Twitter interim CEO Jack Dorsey. “In order to realize Twitter’s full potential, we must improve in three key areas: ensure more disciplined execution, simplify our service to deliver Twitter’s value faster, and better communicate that value.”

We’ve heard this story before.

The company has been making changes to its platform to help jumpstart user growth. In the past several months, Twitter has launched Project Lightning in an effort to show people what can be done on the site. It has also made tweaks to reach those who are both logged in and logged out to improve engagement, while also providing tools to advertisers to reach users by targeting them around around interesting events.