The tablet market continues to contract, a decline that first began in Q4 2014. In fact, Q2 2015 is the third straight quarter in a row to see a decrease year-over-year: 44.7 million units shipped worldwide, down 7.0 percent from the 48.0 million units that shipped the same quarter last year, according to market research firm IDC. 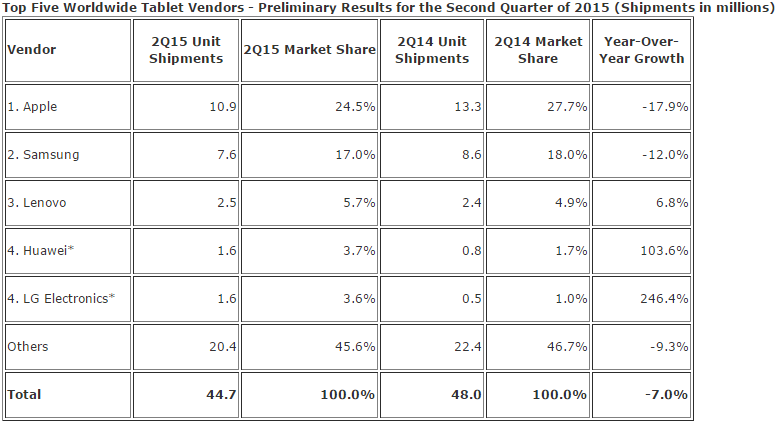 Both Apple and Samsung saw their respective numbers fall as competitors swooped in to pick up the scraps. Apple dropped 3.2 points to 24.5 percent market share, meaning it grabbed less than a quarter of all tablets this past quarter thanks to shipping fewer units. Samsung slipped 1.0 point to 17.0 percent, and it also shipped fewer units. Because of the smaller drop for Samsung, the gap between the South Korean company and the U.S. company continued to shrink.

“Beyond the decline, we’re seeing a profound shift in the vendor landscape as the top two vendors, Apple and Samsung, lose share in the overall market,” Jean Philippe Bouchard, IDC’s research director for tablets, said in a statement. “In the first quarter of the year, Apple and Samsung accounted for 45 percent of the market and this quarter, with the growth of vendors like LG, Huawei, and E FUN, their combined share dropped to 41 percent.”

As before, IDC attributes the tablet market’s decline to longer life cycles (at least when compared to smartphones) and increased competition from other devices, including phablets. The hope is that new Windows 10 devices may be able to rebuild momentum.