Satoru Iwata’s last quarter as chief executive of Nintendo was a good one. The Japanese video game company reported it returned to profitability for operating income in its first quarter ending June 30.

The paint-shooting game Splatoon and a weaker yen enabled Nintendo to report a small profit, just after 55-year-old Iwata died from cancer on July 11. It’s just another small part of a legacy of success that Iwata left at the Kyoto, Japan-based company. 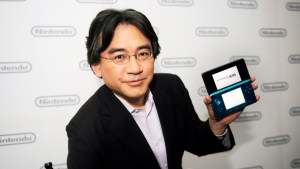 Coming up with a profit isn’t an easy thing for Nintendo, since its Wii U console lags behind the latest consoles from Sony and Microsoft. Nintendo is planning to scrap the Wii U and launch a new system, the NX, sometime next year.

But Nintendo’s 3DS handheld is selling strong in spite of competition from mobile devices. And Nintendo’s Amiibo interactive toys have been a surprise success. The launch of Splatoon, the paint-splashing competitive title, also helped earnings. All of that adds up to a successful rear-guard action while Nintendo strategizes how to seize the initiative in gaming in the future.

With Iwata gone, the responsibility for the larger comeback lies with Super Mario creator Shigeru Miyamoto and hardware architect Genyo Takeda, who are sharing management responsibility in Iwata’s absence. Part of that strategy includes the launch of the NX game console next year as well as mobile games being developed in partnership with Japan’s DeNA. Nintendo resisted putting its games on smart devices for years, but it finally admitted defeat on that front in March when it announced the DeNA partnership.

Splatoon sold 1.26 million units after its May debut. Splatoon was No. 5 on the NPD list of top games in the U.S. in June. Nintendo sold 1 million 3DS handhelds, and it sold just 470,000 Wii U units during the quarter. It is targeting sales of just 3.4 million in the fiscal year. It sold 4.2 million Amiibo figurines. All told, Nintendo has sold 14.7 million Amiibos to date.