Electronic Arts is a prime example of how important revenue from digital stores and in-game transactions are to modern gaming publishers.

The company reported its earnings for the first quarter of its fiscal 2016 today, and it announced that it made more than $532 million from digital revenues. That is up 10 percent year-over-year, and it accounts for more than three-quarters of the company’s total revenues for the three-month period ending June 30. Mobile, console, and PC gaming are pushing the industry to over $100 billion worldwide, and most of that comes from buying and downloading games from digital stores and in-game transactions for mobile and online.

For Q1 2016, EA generated $693 million in revenue, which beat its guidance of $640 million. EA chief financial officer Blake Jorgensen explained that the publisher owes most of that growth to what the company has done in digital.

Most of EA’s digital growth came from what it labels as “PC & other.” This includes its Origin game-distribution service as well as subscriptions for its live services like Star Wars: The Old Republic. 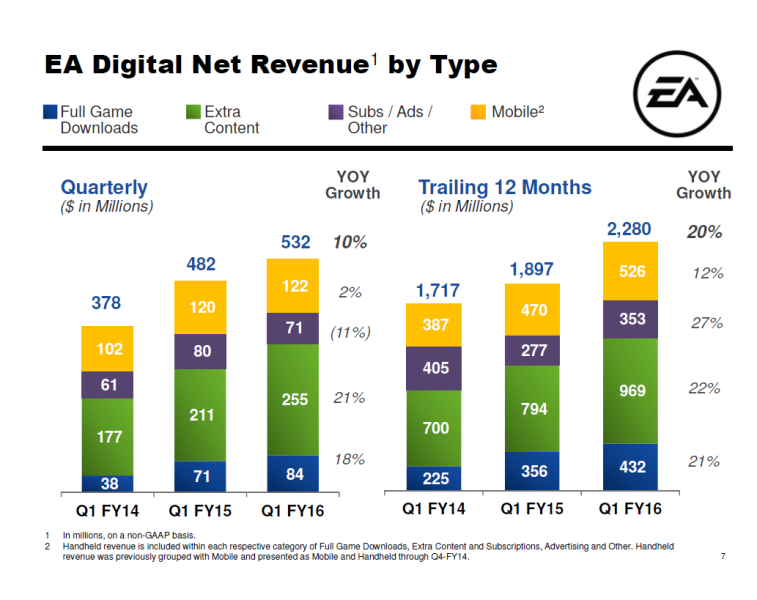 In a further breakdown of digital revenues, the company revealed that its full-game downloads and extra content business are up 18 percent and 21 percent, respectively. Downloadable game made $84 million compared to $71 million during the same period last year. DLC, however, generated $255 million, which is up from $211 million during Q1 2015. These are the healthiest sectors for EA when it comes to generating digital sales.

Mobile is relatively flat at 2 percent growth and $122 million in revenue. And only the subscription and ad-supported game business is on the decline for the company. That dropped 11 percent from $80 million to $71 million.