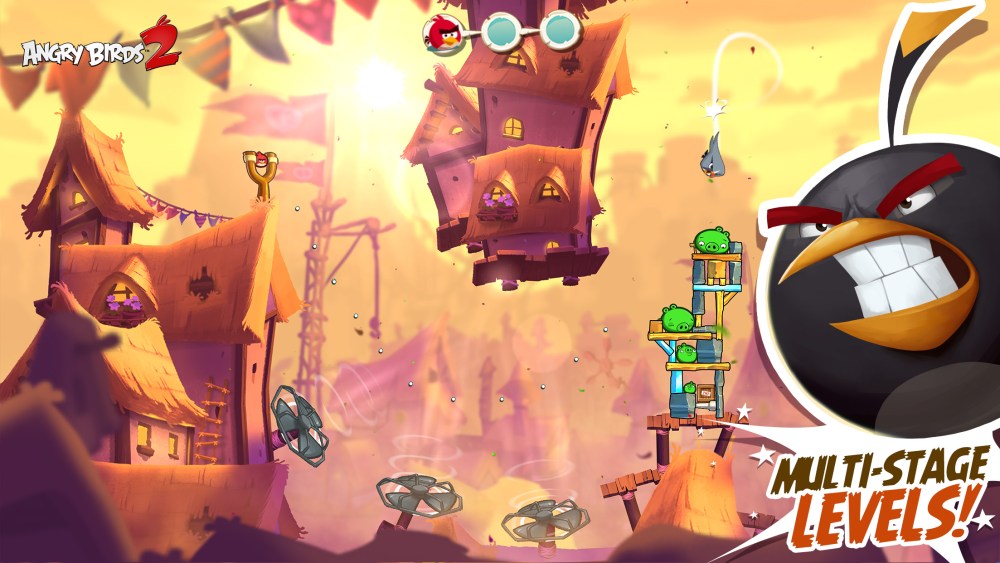 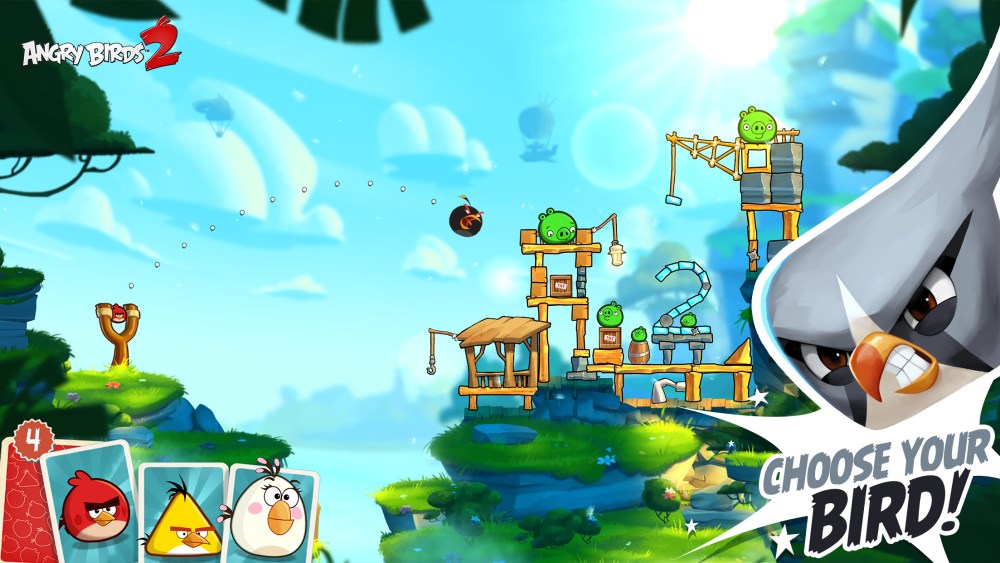 Energy bar? Yep. Five lives that you either wait a half hour or pay real money to renew? Check. Mid-level “oops, I ran out of birds” moments that can only be fixed with a shockingly high number of gems (but no worries, you can buy more with cash!) or a 30-second video to watch? All here.

What’s more, you’re more likely to see these strategies on your screen, because each level of Angry Birds 2 includes a succession of structures to break down. If you fail on the last building, you’ll have to do the whole series over again. 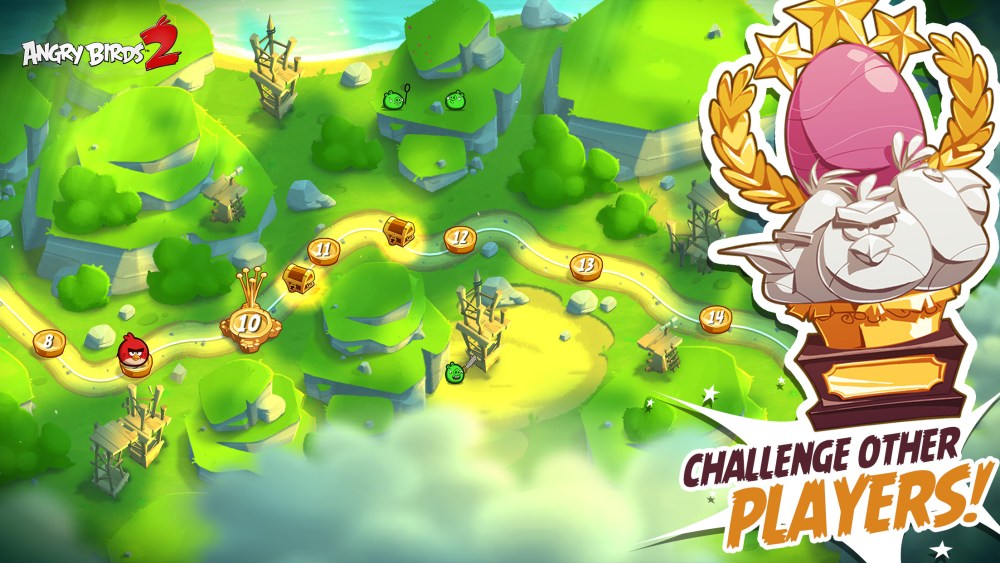 Above: Going online allows you to challenge other players; it’s also an excuse for Rovio to constantly challenge you to connect.

Hey, let’s connect on Facebook. No, really. Are you sure? How about now?

Going online with Angry Birds 2 allows you to compete in the Arena, a daily high-score competition where you get as far as you can with a limited number of birds. You can play twice, once for free, and once by watching a video.

It’s a cute idea, but its insistence that you go online, especially connecting on Facebook, borders on harassment. It cajoles, offers you rewards, nags, even insists that you connect to your Facebook account. At one point, an apparent bug made it unplayable in the 10th tutorial level until the Facebook authorization window was repeatedly summoned and dismissed.

Combine that with the other freemium features and you’ve got the most annoying Angry Birds ever created.

Imbalanced spells give you all or nothing control of the board

Back in the ’80s, an arcade game called Road Blaster gave your cars powerups that you could use to zoom through the levels. They were all fun if you caught them, but you really wanted the nuke, because it would turn every other car or tree or pedestrian or obstacle into a glowing shadow of itself that you could then drive through with a “whoosh whoosh” sound. It was an instant-win button.

Every single one of the Angry Birds 2 spells pushes that button. Whether it’s dropping a flotilla of rubber ducks from space, inflating every pig on screen like a balloon, or turning buildings into towers of fragile ice, they all pretty much guarantee a cleared stage.

You won’t have unlimited spells, but other than the fun of watching the graphical effects the first time through, they add little. The fun of Angry Birds is figuring out your strategy and using your aiming prowess to clear a stage; with these spells, you don’t even have to aim. It’s the “F*** it, I can’t clear this” cheat code of the game, and I found them disappointing. 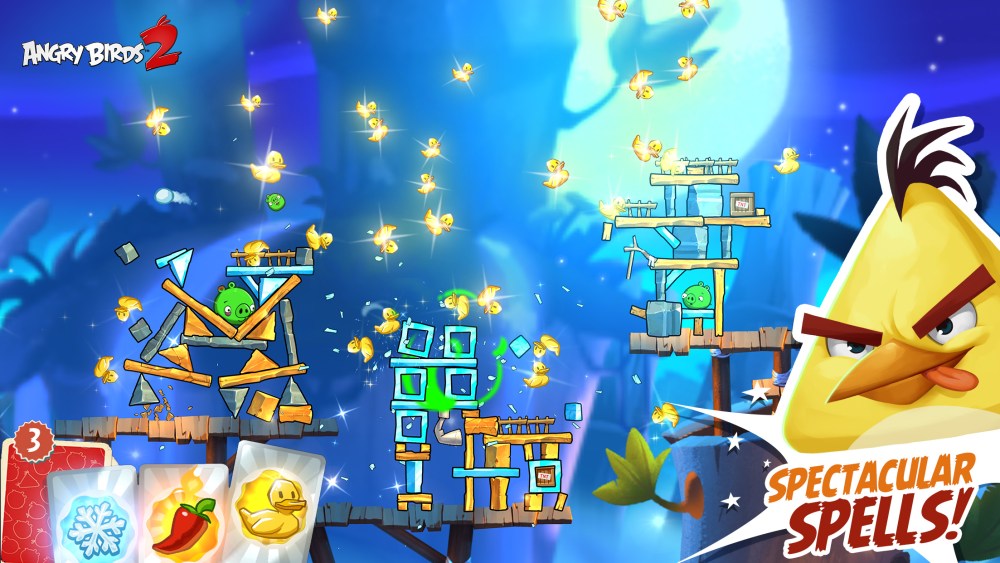 Above: Ducks clear the board for you in Angry Birds 2.

Angry Birds 2 offers some really nice strategic gameplay through careful selection and aiming of your favorite bird assaults. Combined with the gorgeous new backgrounds and settings, that should make this the best Angry Birds yet, even if it doesn’t really innovative.

But Angry Birds 2 is nearly a textbook case of how freemium features and online connection can ruin a casual game. On the one hand, I’m sure Rovio will make much more from Angry Birds 2 than from previous, non-freemium installments. On the other, I wonder whether they could have matched that income by slapping a higher, one-time price on the app, and avoiding the irritation of their millions of customers.

I found the in-app purchases intrusive and destructive of the gameplay flow. If you don’t mind that sort of thing, add 10 points to this review score. If you’re highly irritated by freemium features you can’t avoid, then my only advice is to avoid Angry Birds 2 and opt for one of the earlier games in the series.

Angry Birds is out now for iOS and Android devices. GamesBeat downloaded a code from the iOS store.