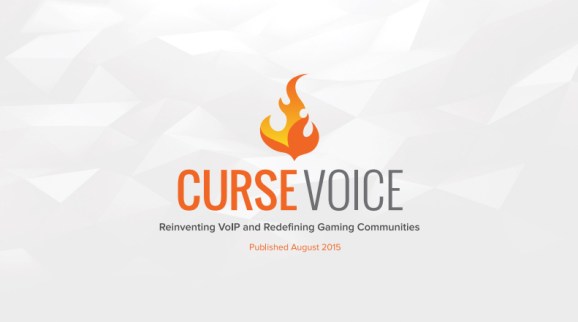 If you’re playing competitive games, communication is key. However, a lot of big titles oddly skip out on robust, in-game voice options.

For years, third-party services like Ventrilo have filled the voice chat gap in PC gaming. However, Curse is arguing that developers need to work harder on their in-game options.

“For developers, online gaming is a constant struggle in innovation,” Curse noted in a press release sent to GamesBeat. “Finding new ways to make a game successful and build a thriving community around any title is hard work. It’s no surprise that developers tend to leave some of the nuances of a good multiplayer experience to their community. Voice chat is no exception, and for the many competitive multiplayer and co-op titles released on a yearly basis, few bother to include any kind of integrated voice communication features at all.”

Curse is best known for its PC clients that easily download and install add-ons for games like World of Warcraft and Minecraft. However, it has also created Curse Voice, its own voice chat program. Unlike Ventrilo, Curse Voice has in-game overlays with select titles, so players don’t need to alt-tab out of their game to change voice options. It has hit 1.3 Million active accounts since launching in May, 2014.

Curse Voice is compatible with PC games like League of Legends, Smite, and Robocraft. Competitive gaming is becoming a huge business. The market is currently worth $621 million, according to intelligence firm SuperData Research. Curse noted in a press release sent to GamesBeat that Robocraft saw a 258 percent increase in active players after it integrated Curse Voice, proving that improved voice options can help grow a game’s community.