Have you ever come across a website, service, application, or product that you’ve been impressed with, and wanted to know more about who created it? You can go the company’s “About” page for more information, but chances are, it’ll just show you the executive team, not the name of the developers and designers. That’s where Makerbase hopes to come in handy, and it’s publicly launching today.

Started by technologists Anil Dash and Gina Trapani, Makerbase is a site that credits makers and highlights digital projects. Users can list projects that they’ve helped create, either for their jobs or in their spare time. It doesn’t matter if the project was commercially successful or not  — the concept is to cast a spotlight on the people who had a hand in the project and the work they did.

If you’re not familiar with Dash and Trapani, both have very lengthy and renowned backgrounds. Dash was the first employee at blogging and content management platform Six Apart, where he served as chief evangelist. Trapani founded the Lifehacker blog in 2005 and has been named by Fast Company as one of the Most Influential Women in Technology in 2009 and 2010. Both Dash and Trapani are cofounders of ThinkUp, which produced Makerbase. 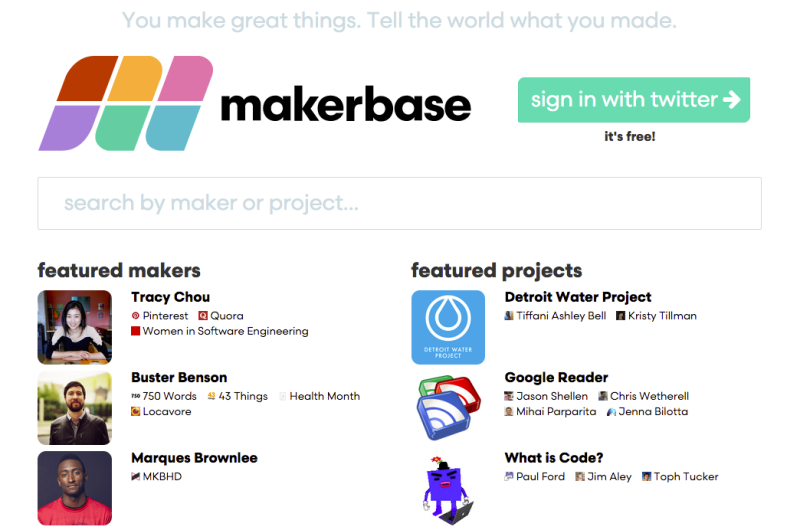 “We often talk to younger people entering tech, and they all say that learning to code is simple, compared to the challenge of just figuring out who to have a cup of coffee with, or how to learn who made an app that they would love to help build,” Dash told VentureBeat in an email. “Makerbase helps fix that issue while also helping those who are already in the industry show off their work.”

Anyone can use Makerbase and anyone can edit pages, just like a Wiki page. If you find someone has been left off a team (no matter their role), you can add them. If they don’t have a profile, you can create a profile for them. 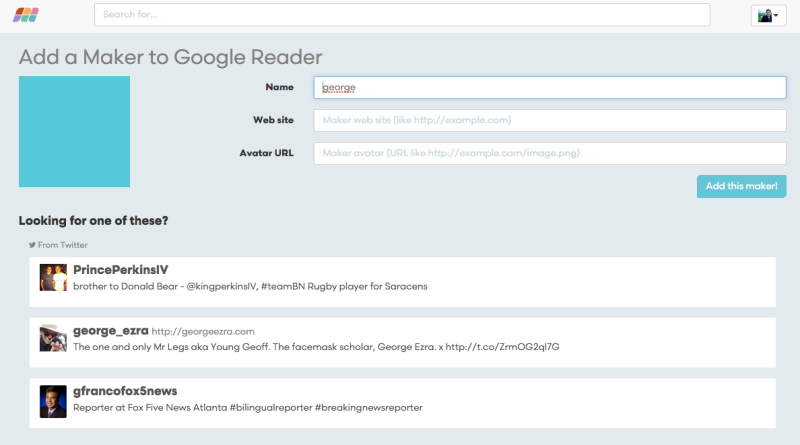 While you can look at individual projects to see who has worked on it, Makerbase also sorts out data by person, so you can look at someone like Tracy Chou and see that she’s worked on Quora, Pinterest, and also created the group Women in Software Engineering. In a way it’s almost like a project-based resume.

A community-based service, Makerbase is free to join. It will make money by selling sponsorships with the first three going to MailChimp, Hover, and Slack. The goal is that when a project is built using any of these sponsors, they can be easily promoted. Only the aforementioned three services are available to be selected, but Makerbase will be adding more in the coming months. 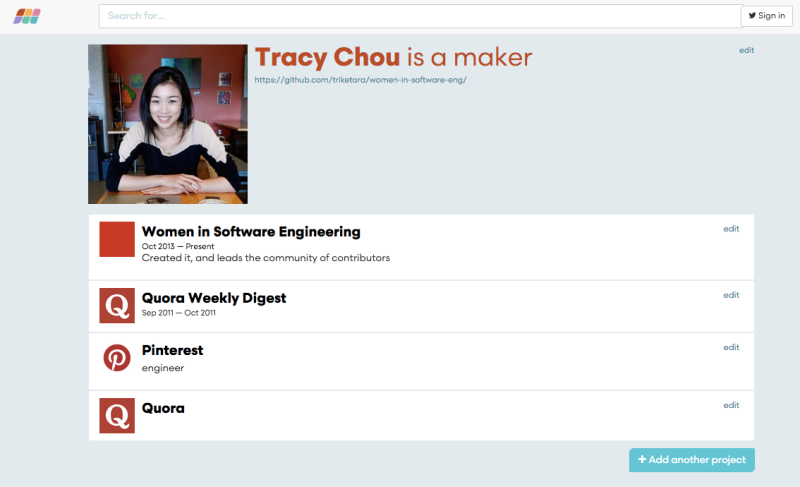 Originally geared to be a part-time project, Makerbase is gearing itself up to help “up-and-coming entrepreneurs” get access to opportunity, including those in underrepresented communities.

To some, the service has some similarities with LinkedIn, ProductHunt, CrunchBase, and VB Profiles all mixed into one. Dash describes it almost like an IMDb for people who make apps, websites, and software. Trapani, herself, can see how comparable her site is to the others, but says there’s a difference:

Unlike ProductHunt, Makerbase emphasizes makers, who collaborated with who, and projects that were completed years ago but led up to someone’s current work. Unlike CrunchBase, Makerbase is not focused on founders or funding or companies at all. (Like Kickstarter, Makerbase explicitly defines a project as a creation that is NOT a company.)

How much work going into Makerbase remains to be seen as it seems to still be a part-time deal for Dash, Trapani, and the team. However, there are almost a thousand users on the site that joined during the invitation-only beta test. It’s likely that if there’s enough traction, this could see more progress.

As of now, the design and features on Makerbase appear very basic and standard, like one would have on a wiki. How rapidly it will be adopted by “makers” remains to be seen.