The computing giant says that it will soon offer the FantasySalesTeam platform to its own customers to “help them incentivize their sales teams to new heights and better results,” according to a blog post by Bob Stutz, corporate vice president at Microsoft Dynamics CRM.

FantasySalesTeam was founded out of Austin, Texas in 2012, by Adam Hollander. The company has taken on $1.5 million in funding to date, with the most recent $750,000 round closing in January.

The basic concept behind FantasySalesTeam is nothing new — companies of all sizes the world over often incentivize staff to push their sales and “think outside the box.”

Where FantasySalesTeam differs, however, is by offering a platform designed to encourage everyone in the sales team at all times. The problem, according to Microsoft, is that the top-performing sales people tend to always be the same people, with those “lagging” becoming “disengaged” once they realize they’re behind.

With apps for Web, Android, and iOS, companies can create tailored games based on specific metrics. Scoring methods are then defined, with employees earning points, and everyone can view the progress and leaderboards of everyone on the team. Heck, there’s even a smack-talk board to dish out abuse to your colleagues. 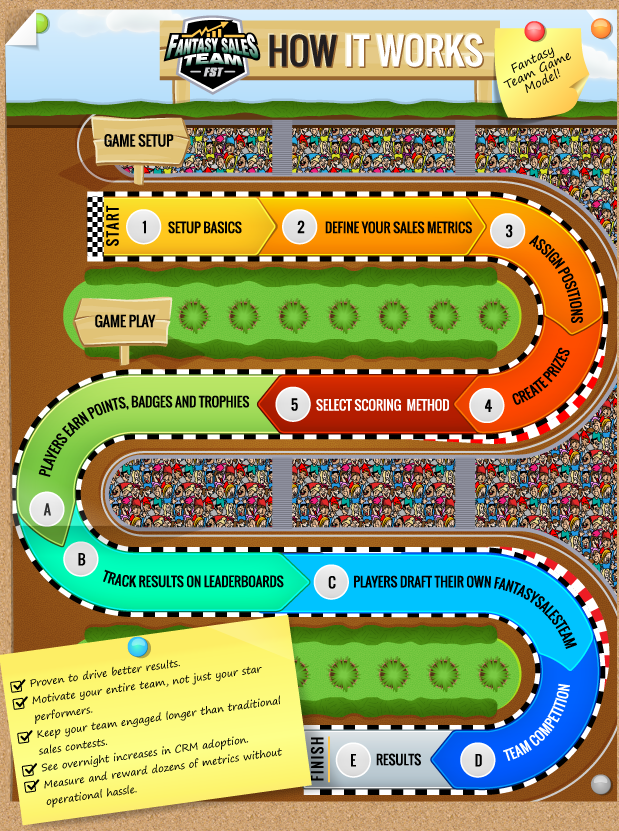 In terms of how scores are tracked and recorded, FantasySalesTeam has already built integrations with customer relationship management (CRM) systems, including Salesforce and — importantly — Microsoft Dynamics. The company also offers an API so it can tap data from any system.

So Microsoft will be dangling direct (and automatic) integration with FantasySalesTeam to help drive adoption of Dynamics. But it says it won’t be closing off access to other existing CRM tools out there, including Salesforce.

Interestingly, Microsoft adds that there is scope for extending the technology beyond that of sales teams. “We will evaluate these other scenarios closely as we integrate and evolve FantasySalesTeam into the Dynamics ecosystem,” says Stutz.

The broader fantasy sports industry is thought to be worth $15 billion in the U.S. alone, so it’s clearly big business. FantasySalesTeam has essentially tapped a trend from the consumer realm and brought it into the enterprise, and Microsoft now wants a piece of the pie too.