What, you didn’t expect me to actually beat all of those games did you?

Rare Replay is a collection of 30 titles from the famed developer’s catalog that comes out tomorrow for the Xbox One. Frankly, playing through all of them for a review would have been impractical. Instead, I sampled each game for 10 minutes and wrote a few impressions. That’s a lot of games, so let’s get to it!

This is a pretty simple arcade-style game. It’s kind of like Joust, except you have a jetpac, you don’t need to press a button repeatedly to fly, and you’re collecting fuel instead of eggs. OK, I guess it isn’t that much like Joust. Still, I thought Jetpac was fun in that classic, arcade-y sense. It’s nothing crazy, but it takes a decent amount of skill and reflex to avoid all of the stuff flying at you while hovering around the screen.

Remember how I enjoyed Jetpac for its simplicity? Lunar Jetman is a complicated mess. It’s a side-scroller that tasks you with destroying an alien base. However, a ton of crap is flying at you from both directions, and it’s hard to avoid it all. Also, you can’t just shoot the base. You have to drop a bomb on it. So, first you need to pick the bomb, then you drop it on your rover, then you get in the rover, and then you start driving it over to the alien base. However, you’ll run into craters that you actually have to build bridges over. You do this by getting out of your rover, picking up support beams that I guess are stashed in the trunk, and then laying them down. This whole time, crap is flying all over the place and trying to kill you. It’s convoluted. 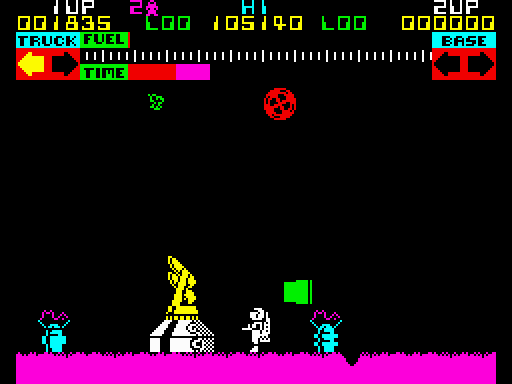 This was kind of like Gauntlet … a bad Gauntlet. Maybe it’s kind of a Rogue-like? You’re running around a maze full of monsters, food, keys, and locked doors. It’s impossible to really know where you’re supposed to go, so you just sort of run around aimlessly. That would be kind of OK except that your life bar is always slowly depleting, so you need to constantly find more food. However, I did like how my axes bounced off of walls when I threw them.

This is another top-down, exploration-based game, except now you’re a guy with a sword in a jungle. You collect gems and slash animals to death. Weird plants can also give you invisibility. It wasn’t much, but at least my health wasn’t constantly depleting, and I didn’t have to stare at locked doors every other screen. So, compared to Atic Atac, I guess this was OK.

You’re the same guy from Sabre Wulf, but now you’re in a 2D platformer where you’re going deep into caves looking for gems. The jumping physics are pretty wonky. You can only go straight up or at a strict angle forward, and missing your jump or hitting an enemy makes you bounce around like crazy. Mario it isn’t. Heck, it isn’t even Pitfall.

Man, Rare made a lot of PC games in 1984. This stars the same dude from Sabre Wulf and Underwurlde. This one, however, is an awkward, isometric platformer. The in-game geometry makes it really hard to tell what items are supposed to be closer to the screen than others, so I died a lot just by running into spikey balls that I thought were further away from me. This game did have a mechanic that turns you into a wolf every minute or so, but it didn’t really seem to make any difference to the gameplay. The transformation animation was kind of cool, though. More than the previous games, I can appreciate Knight Lore’s ambition, and I’m sure this was an eye-opening game in 1984. However, it hasn’t aged well. 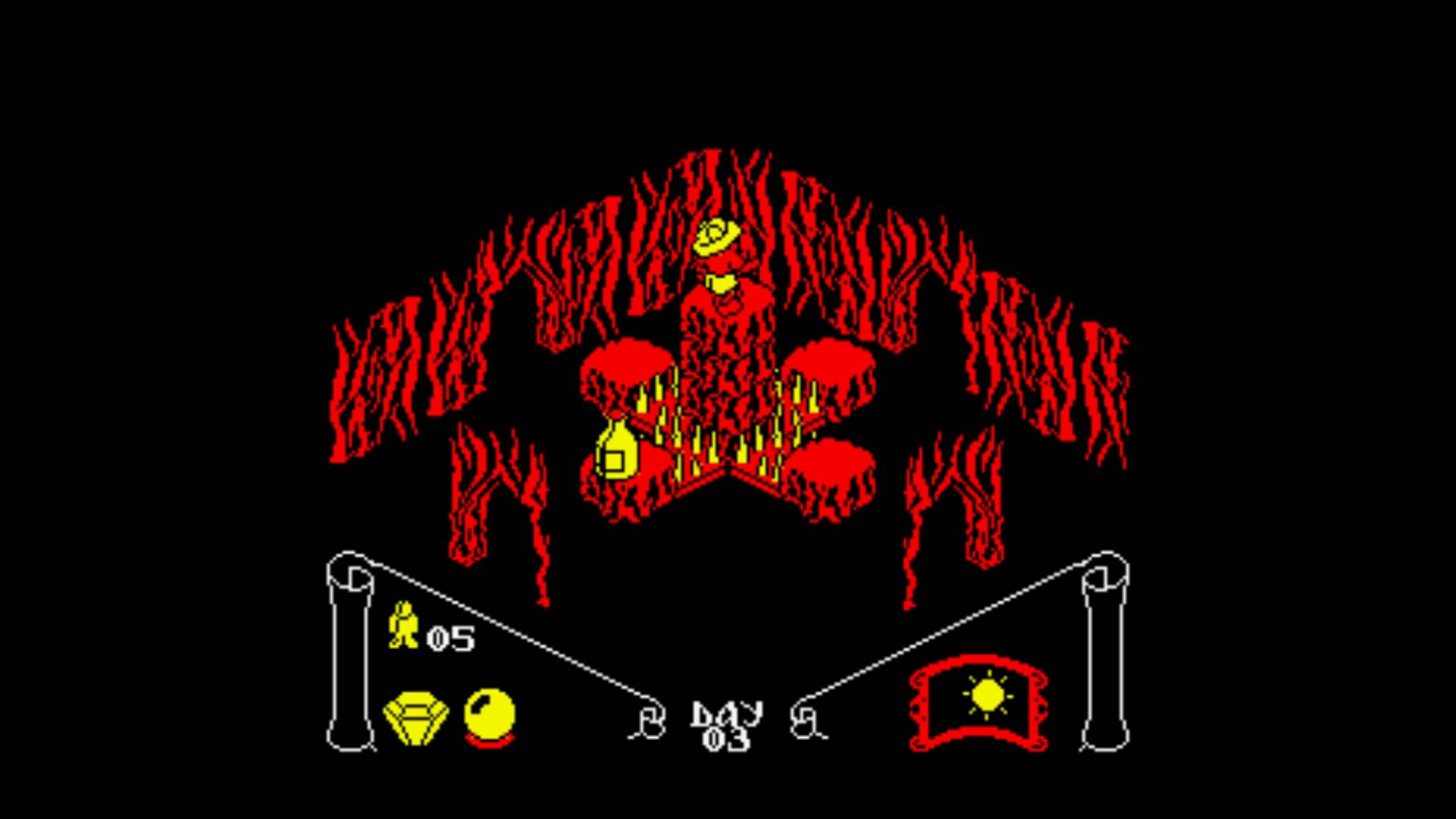 This uses the same isometric view as Knight Lore, but this game holds up a bit better. Basically, you’re a cowboy who walks around a classic Western town looking for a wanted man to shoot. For some reason, walking into the random women who roam the town kills you. It’s also kind of a pain to line up your shots, since everyone is moving so fast and the hit-boxes are tiny.

We are thankfully leaving the ancient PC era behind and entering Rare’s days on the Nintendo Entertainment System. Salom is a simple skiing game. You race down tracks avoiding trees and other skiers, and you can jump off of snow mounds and do tricks for extra points. It’s basic, but it’s amusing.

This is the first piece in this collection that I have any kind of nostalgia for, since I owned it as a kid. It’s an isometric (what’s with these guys and isometric games?) racer. Boosts and items litter the track, making this something of a precursor to the Mario Kart series. It’s still fun, but the isometric view makes it hard to actually see what’s coming ahead of you, so you’ll only get all the items and boosts if you’ve memorized the tracks.

I did not play this back in the day, but it’s awesome. It’s kind of like R.C. Pro-Am but with boats and a lot more variety. One stage is a race, another has you shooting targets while being carried away by a current, another has you protecting swimmers, and then you’re suddenly fighting a giant sea monster. Also, your boat sprouts a tiny propeller so it can fly between levels. Where has Cobra Triangle been all my life?