The mobile advertising system has exploded — but it’s also left many overwhelmed and confused. In this series titled “Maximizing Mobile Ad Monetization” and presented by Supersonic, publishers learn how to take back the reins and navigate the intricacies of mobile advertising. See the whole series here.

If the advertising industry were a rocket, mobile video would surely be its rocket fuel.

Powering the industry’s recent takeoff, mobile video has surged past desktop video as one of the fastest growing segments in digital advertising. By 2019, it’s estimated to become 47 percent of total digital video ad spend according to eMarketer.

Developers are defining new and creative ways to integrate the lucrative video ad format in hopes of securing their piece of that pie. At the forefront of this creative shift is rewarded video. Rewarded videos are modified video ads designed around an in-app economy, granting users premium content such as coins or credits in return for viewing a short video clip.

Let’s explore several examples of rewarded video and how mobile publishers are leveraging this exciting format to maximize ad monetization. 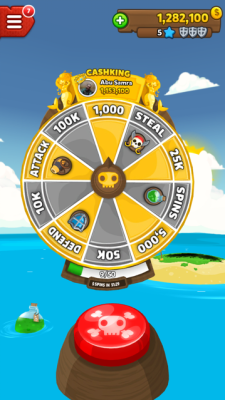 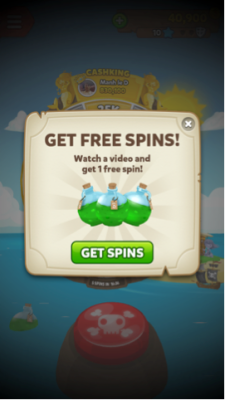 Simply placing a video ad before and after each level is uninspiring and can get quite predictable. Users prefer something more interactive. Instead, encourage your users to initiate video ads through interactions like tapping or sliding functions within the app.

Jelly Button’s ‘Pirate King’ uses this method seamlessly. The game satisfies every person’s pirate fantasy of traveling the open seas in search for treasure and adventure. Its gameplay is centered around spinning a wheel to either win virtual gold, attack another player’s island, or defend your own. Winnings can be used to purchase or upgrade items on the island, buffing its defense against other invading pirates. Although players are only given a limited amount of spins, they can purchase additional spins as IAPs (in-app purchases) if they wish to progress further, faster.

At seemingly random moments, a floating vial will appear in the waters indicating a rewarded video is available to view. Pirates are only prompted to view the mobile ads if they tap on the vial. Upon tapping and completing a video, pirates are awarded a free spin which they can then use to further gameplay in absence of spending real money.

Strive to design natural elements within your app that can be paired with an ad. This will ensure your ad experience is both naturally engaging and interactive to the user. 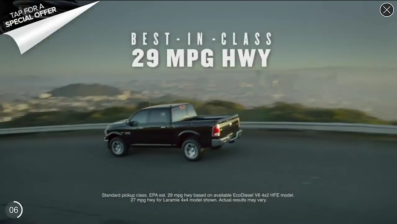 “Consumer consent and control is a powerful trend in digital advertising, and mobile games are leading the way in defining this new paradigm,” said Dave Madden, head of Global Media Solutions, EA.

Forcing video ads on your users is a sure-fire way to lose them. Prevent this by providing full opt-in and video controls. This will maintain a balance between desired ad engagement and the user’s experience.

In the tasty mystery of Chillingo’s Another Case Solved, you are a detective attempting to solve the town’s strange disappearance of sweets. Players must uncover objects, solve puzzles, and track down suspects to piece together hidden clues. In the example above, the detective’s phone is a tap-able element that occasionally rings when a rewarded video is available for view. Notice the following video has clear exit options among other video controls. Should the user change their mind halfway through the video, they can “X” out at anytime and continue on with gameplay.

It’s important to remember that full control goes beyond just the opt-in. Be sure your video creatives provide a clear exit button, volume dial, countdown timer, and an interactive call-to-action for a stronger, less intrusive mobile advertising experience.

3. Break the ice for freemium users: not just for games 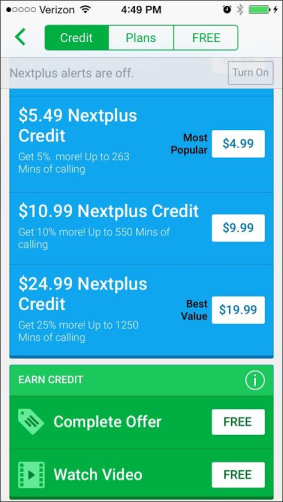 Rewarded video ads are not exclusive to mobile games. In fact, NextPlus, a leader in the messaging and communication app category, utilizes the format as a way to get users acquainted with its premium features.

The utility here caters extremely well to the app’s main demographic. Roughly 80 percent of NextPlus users are between the ages of 13 and 24 — typically an age group who are not heavy IAP spenders and can’t necessarily afford credits. NextPlus awards free credits to users who watch rewarded video ads, thus allowing them to make calls or texts with no financial obligation.

Scott Lahman, Founder and CEO of NextPlus says, “the success of communication apps like Nextplus typically include In-App-Purchases (IAP). In some cases, however, users don’t have the means to make these credit purchases […] [Rewarded Video] has enabled an alternative revenue stream while increasing user engagement with no monetary commitment. It’s a great icebreaker for future power users.” 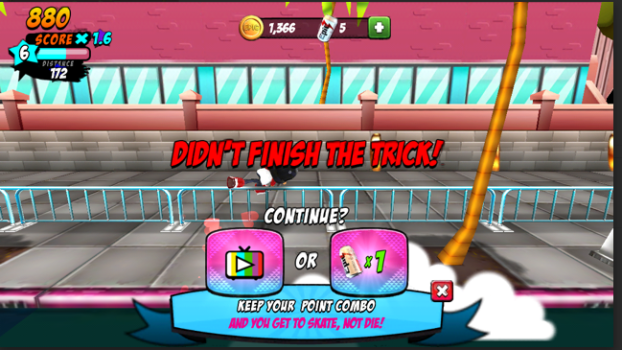 Running out of lives before a major checkpoint or crashing out yards shy of the finish line can be frustrating to many gamers — heck, possibly all gamers.

Fortunately for developers, these events can be alleviated and even monetized. Instances where players fall short or would like to get ahead are great opportunities to present rewarded video ads. Kongregate’s Epic Skater does an excellent example of the former.

The game features a customizable character, equipped with the default helmet and skateboard, dropped in what every skater would consider paradise: a vast, empty city with grindable rails and ledges as far as the eye, or mobile screen, can see.

Gameplay consists of performing tricks to accrue points which can later be redeemed for in-game skins and flair. When a user fails to complete a particular trick, they must select one of three options to progress: watch a video ad, use an energy drink (IAP), or start the entire session over again. Skaters are quick to decipher that watching a 15-30 second video takes much less time than having to start over again, subsequently leading to increased video ad views and IAPs.

Identify where a player’s emotion or defeat can lead to an ad view. These features monetize and mitigate user frustration by allowing them to continue gameplay non-invasively. 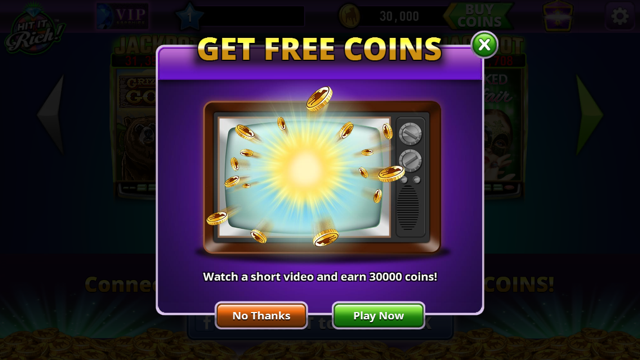 Strategically placing your video ad within app content has proven advantageous for many developers. But sometimes, it just pays to be spontaneous and direct.

Zynga’s Hit It Rich, a leading free online casino slots game, understands this quite well. On their first session, players are shown a rewarded video ad with a rather large coin payout, then only shown the same reward intermittently after that.

This elusive gesture sees high traction as users are unsure when the next opportunity may arise. In classic Vegas-like fashion, the large coin reward also labeled ‘jackpot’ furthers the connotation that this gift event is irregular and happens very infrequently. If you have any relevant verbiage that you can tie into your rewards, by all means do so!

And as always, monitor and balance your rewarded payouts. Providing the user with too little payout makes watching rewarded video ads an unattractive option. In contrast, providing too much can ruin your app’s inner economy.

Got any other tips you’d like to add? Tell us in the comments below or on Twitter @SupersonicAds.

Terry Koh is the Global PR and Content Marketing Manager at Supersonic. Supersonic powers the largest mobile video mediation platform trusted by the world’s top publishers and developers. Connect and follow us on Twitter @SupersonicAds.