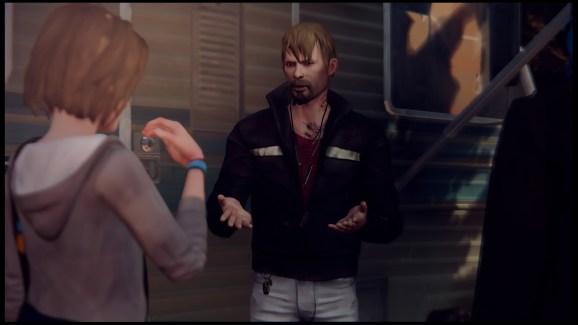 Screw you, Frank. You're difficult.

This post contains spoilers for Episodes 1-4 of Life Is Strange.

We hear a lot about choice in games lately, but we don’t always get a chance to see how — or if — it actually works. Luckily, we have a graphic from the makers of the time-rewinding episodic title Life Is Strange that does just that.

The recently released fourth episode of Life Is Strange (which we quite enjoyed) includes an important scene in which heroes Max and Chloe confront drug dealer and dog rescuer Frank at his RV on the beach. They need a list of Frank’s clients to continue their investigation, and how the negotiations turn out depends not only on making the right dialogue choices in this conversation but also on conditions that exist based on decisions you’ve made throughout the series.

Some players were disappointed at the lack of real choice present in games like the first season of developer Telltale Games’ The Walking Dead, in which all choices ultimately just lead back to a “center line” of plot. But it looks like Life Is Strange developer Dontnod is putting the work in to make players notice and feel consequences and create more personalized stories.

Check out the whole chart below:

Above: Click on the image for the ridiculously large version.

A lot is going on here, and what you’ve done in the past can make it easier or harder to get Frank to go along with you. Chloe could have stolen some money in an earlier chapter, and this lets her repay a debt and puts Frank in a better mood. One or both of them could also be armed. Reformed fighting dog Pompadou could be around or not, depending on which direction you threw a bone earlier. You also might have discovered some optional information which unlocks additional dialogue options to help turn things your way.

Interestingly, only one ending exists in which nobody gets shot, stabbed, or bitten, and it takes a bit of skill (or just a ridiculous number of retries via Max’s ability to rewind time) to achieve. But you can still get the information you need without getting the ideal conclusion, and only two of the six possibilities force you to start over. It’s up to you whether to let a less than ideal outcome stand or rewind and try again.