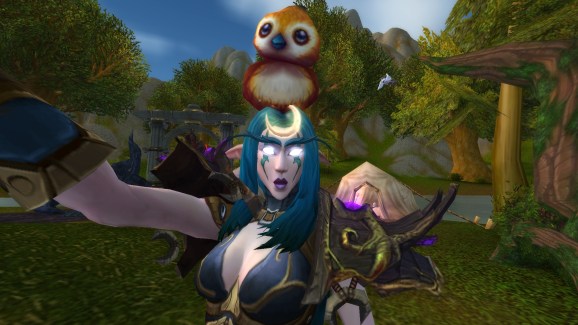 Take this selfie quick; one can only keep a bird on your head for so long without consequences.

Blizzard is getting ready to announce some major new content for World of Warcraft later this week, and it seems clear now that the publisher is trying to get lapsed players back.

World of Warcraft lost 1.5 million subscribers from the first three months of the year through the second three months. That drops the game’s total number of subscribers to “only” 5.6 million, which is down from 7.1 million during Activision’s Q1. This bleeding comes around a half a year after Blizzard released the Warlords of Draenor expansion for World of Warcraft that gave a huge boost to the massively multiplayer online game.

This is a low point for World of Warcraft, which hasn’t had a membership rate this low since 2005. And it is a massive drop from the game’s peak of 12 million subscribers back in 2010.

None of this means that World of Warcraft is dead. It is clearly on the back end of its life cycle, but it is still far more popular and successful than any other MMO ever. And with 5.6 million people paying around $15 every month, Blizzard is still generating plenty of revenue.

Most interestingly, no other MMORPG has stepped up to take WOW’s place. It’s not like Blizzard is losing players to some release that is doing the genre better. Instead, it’s likely that players are moving on to games like Heroes of the Storm, Hearthstone, or all kinds of other free-to-play games.

But for the foreseeable future, WOW will continue making tons of money every month. And we’ll get a good look at how Blizzard intends to ensure its MMO keeps subscribers coming back on Thursday when the company hosts an event live from the fan convention Gamescom in Germany.