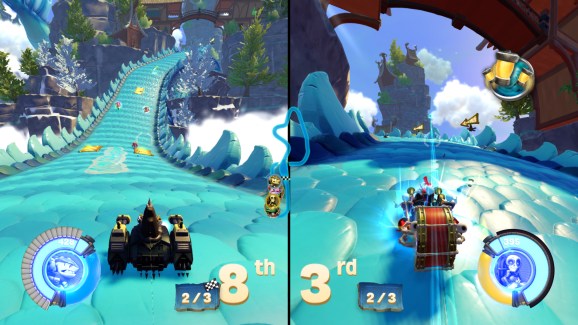 The new Racing Mode splits across this year’s land, sea, and sky race zones, with each providing a tailored track for different Skylanders vehicles. Three-lap time trials with an online leaderboard supplement the new mode.

All versions of Skylanders SuperChargers Starter Packs have six tracks included — two each for land, sea, and sky. Locally, the human racers are limited to just two players, which takes the edge off of the announcement somewhat. But online, you can challenge up to three other players.

Skylanders SuperChargers Racing Action Packs extend the racing experience, and you purchase these separately. Each pack includes a SuperCharger character and vehicle pair along with a villain trophy. Placing the trophy on the Portal unlocks the additional racing content. One pack is provided for land, sea, and sky races.

The villain trophy, one of which is also included in the Dark Edition Starter Packs, unlocks two new tracks and new modes, including SuperVillain Cup, Boss Pursuit, and Mirror Cup. It has 12 new boss villains across all three packs, with four in each, which players can defeat and then play as. A little like last year’s Trapping mechanics, players can store these boss villains on their villain trophy toy to play at a friend’s house.

Although Activison hasn’t shown this in detail, Skylanders SuperChargers Racing on Wii and 3DS does promise new tracks, power-ups, boosts, and hazards. The 3DS will offer head-to-head and competitive multiplayer via local play or online with up to four players. And, of course, these come with the cross-over Amiibo Skylanders — Turbo Charge Donkey Kong and Hammer Slam Bowser — that also function in other Nintendo games.

Guha Bala, the studio head at developer Vicarious Visions, described the level of investment to get the long-requested online multiplayer working in the game. “Online involved rewriting the entire engine and all its systems. It’s not simply a matter of network code. That was a lot of work but it’s important work and important to do it right.

Bala expanded on how the concept developed. “In addition to the race tracks in the Starter Pack, action packs have a vehicle and Skylander and boss trophy. Each one unlocks new tracks and new modes of play, like the boss challenges. You can capture the boss, play as the boss, and drive the boss’s vehicle. We look at it from the perspective of, if I was a kid, where would I want to go with this.”

This last point is interesting as it opens the possibility of playing as a wide range of villain characters, including Kaos himself. The ability to take control of Skylanders main villain and drive his vehicle is territory that fans have been asking for.

Playing the online multiplayer mode at Gamescom was impressive. Not only did the PS4 demo setup keep the framerate tight and visuals smooth but the gameplay was instantly addictive.

SuperChargers happily avoids the temptation of making this all about weapons and power-ups. While you do benefit from having a customized vehicle from the main campaign, the focus is still on racing. The bonus boxes add a degree of randomness but players still have to find a good racing line.

Vicarious Visions have resisted the temptation of speeding up those at the back of the pack for a more intense game. Instead those who are getting left behind are granted slightly better (and speedier) specials.

Overall the karting mode in Skylanders SuperChargers felt frantic and fun. Even after playing for an hour, I had a strong desire to have one more go. Marry this with the back and forth of upgrading vehicles in the main campaign and this years Skylanders also has great coherence than previous outings.

Online multiplayer in both campaign and the new kart racing modes is another two ticks for Skylanders SuperChargers. This, together with the more toy-like vehicles, better backward compatibility for last year’s portals, and a disc-only/download route to purchase will stand it in good stead against competition from Disney Infinity and Lego Dimensions.