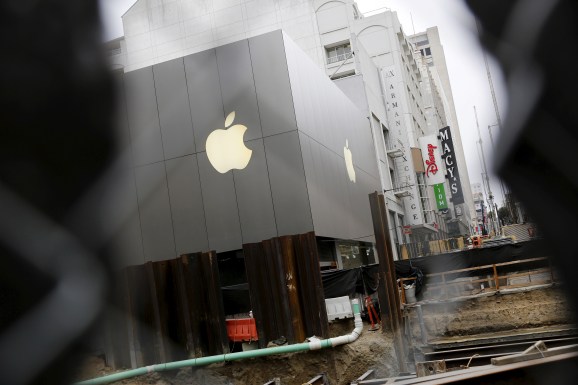 An Apple retail store is shown amid construction in San Francisco, California, July 21, 2015.

Anyone looking for some clear signals about Apple’s current quarter won’t find them in a new report that delivers more mixed news from the company’s last quarter.

But it also lost ground in the U.S., where iOS market share dipped to 30.5 percent from 32.8 percent for the same period a year ago.

In China, iOS market share was 20.1 percent, up from 12.8 percent a year ago for the second quarter. Overall, that’s good news. But it’s worth nothing that iOS market share has been up and down over the past year in China. In the first quarter of 2015, for instance, iOS had a 26.5 percent market share, according to Kantar.

These latest numbers refer to the time period covered by Apple’s most recent earnings report, when iPhone sales figures came in a bit lower than analysts had expected. This current quarter isn’t likely to see a ton of new momentum, as some buyers typically wait to see what new phones the company announces in early September.

Apple’s stock has fallen from $132.07 before the last earnings report on July 21 to $114.64 yesterday. Not surprising, given the soft iPhone sales, but not likely causing too much panic at a company that is still the world’s most valuable.