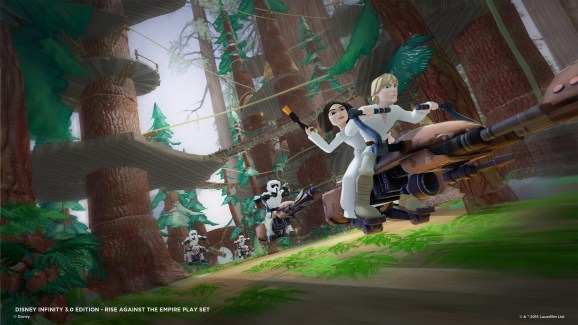 Speeder bikes take your Star Wars characters through the trees of Endor.

Disney may not have new online racing modes or new worlds to unveil, as Skylanders and Lego Dimensions did this week, but it did offer a first look at the Hulkbuster and Ultron figures as well as Rise Against the Empire’s Endor levels (and catapulting Ewoks, but more on that later) on the show floor.

Still tight-lipped as to the details of the Marvel play set for Infinity, except for confirming that one is coming, Disney was more forthcoming in terms of getting hands on with new Marvel characters in the toy box mode.

First up was Ultron, the villain from Avengers: Age of Ultron. He has flight abilities along with ranged energy blaster attacks. In the demo, in fully upgraded form, he showed off a range of melee combo attacks. This is rounded off with his finisher and special attack moves.

The range of combat options here come from action game developer Ninja Theory’s work on its Star Wars playset. Getting close up to take on enemies, Ultron feels like a well-rounded, powerful combatant. While previous versions of Infinity offered similar combat, 3.0 gives the player more flexibility on how they take each enemy down — moving it more toward the brawling of Assassin’s Creed or Batman Arkham Knight (of course, without the blood and gore).

Hulkbuster was the other Marvel character on show in the toy box. Like his minifigure, he has a large presence onscreen. Not unlike last year’s Hulk character, Hulkbuster Ironman offers flight and on-foot combat. Timed attacks trigger with more complex combos this year, giving his combat a more hardcore feel.

The simplified Upgrade Trees cut down on last year’s sprawling mass of options, which confused some players. Disney has broken these powers down into different tabbed categories. This works well and avoids spending hard-won upgrade points on the wrong ability. Like last year you can reset (and re-spend) upgrade points just twice so care here is important.

The show floor had a deeper look at the Endor levels from the Rise Against the Empire playset. This takes us to an Ewok village setting, complete with AT-AT walkers, falling log traps and speeder bikes. Of all the locations in Star Wars this is one of the most iconic and impressive-looking.

With the sun setting behind the trees, speeding through the toy-styled forest is quite a spine-tingling moment for anyone with even a passing memory of watching the film. However, it also underlines the frustrating fact that Rise Against the Empire content will be at a premium at launch and only available in the high-priced Saga Edition of the Starter Pack exclusive on PlayStation 4 and PlayStation 3. Other platforms will have to wait another month after launch before they can purchase this content.

While Lego Dimensions and Skylanders SuperChargers offered much more substance at Gamescom, Disney Infinity’s Star Wars and Marvel brand remains strong. Certainly the prospect of ongoing Star Wars content for the new film when that launches in December and the Marvel playset will grab fan’s attention when deciding which toys-to-life game to pursue.