GameOn Technology has raised $1.5 million in seed funding from investors that include football legend Joe Montana. The startup hopes its GameOn app will change the  way sports fans watch and talk about big games. 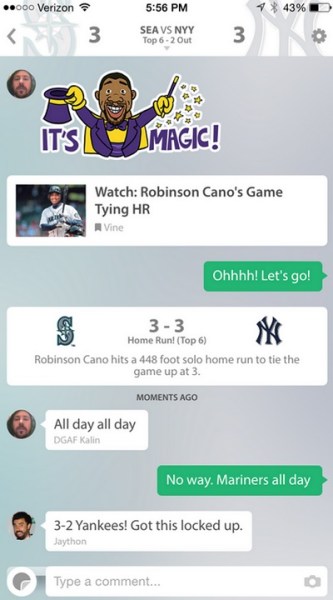 The San Francisco company will use the money to develop its platform and expand its team. Prominent athletes like Lawyer Milloy, Sydney Leroux, Joel Embiid, Cobi Jones, and TJ Ward have signed on to contribute exclusive content to GameOn and interact with fans in the free iOS and Android app.

“Gameon is a great sports app and that’s why our fund invested,” said Montana, founder of Liquid 2 and four-time Super Bowl winning quarterback for the San Francisco 49ers, in a statement.

GameOn lets users join “huddles” ­­(group chats that ‘follow’ specific sports teams), ­­ and it automatically pumps in real-­time news, scores, and highlights. Friends who are watching the game from different locations can interact as if they were in the same room together, while those who aren’t currently watching can follow the action with highlights, live updates, and commentary from friends.

Users at the stadium can take video and boast about the great time they’re having. Between games, the app keeps fans engaged by delivering news updates that spur conversation. GameOn also regularly adds high-­quality sticker packs, which are designed and produced in-­house, including specific packs from athletes like Sydney Leroux, Joel Embiid, Dwayne Bravo, and Lawyer Milloy.

“We felt like it was time to build an app that really gives sports fans what they want,” said GameOn CEO Alex Beckman in a statement. “We used every social sports app out there. We decided to build what we love and hope fans and athletes love it too. We don’t think of our battle as one over first or second screen — our goal is to connect fans and keep them locked into the game, no matter where they are.”

GameOn collaborates closely with athletes to create a social experience, and Montana helps the company connect with athletes and sports fans alike.

The app will soon let athletes host their own public huddles, where users will be able to interact with them and discuss the game as it happens live, or hear stories and anecdotes directly from the athletes. The first huddles will include the likes of Pro Bowler and Super Bowl champ Lawyer Milloy, international cricket star and ESPY nominee Dwayne Bravo, US soccer legend Cobi Jones, two-­time Pro Bowl safety T.J. Ward of the Denver Broncos, and Dan Skuta of the Jacksonville Jaguars.

Rivals include Sqor, Fancred, and Twitter. While other apps try to create brand-new social networks, GameOn believes that’s too much to ask of fans.

During the 2012 World Series, the founders — all Giants fans — were spread out across the country, trying to communicate with one another while following the games. They tried group chats, email threads, and WhatsApp groups. They found it cumbersome to keep up with each other and the action on the field at the same time. Thus, the idea for GameOn was born.

The app has had more than 50,000 downloads during its year of public beta testing.